The most comprehensive survey of Africa’s youth to date – the African Youth Survey 2020 – reveals a rising Afro-Optimism among the continent’s youth-driven by a strong sense of individual responsibility, a post-colonial mindset, entrepreneurialism, and confidence in a shared African identity. Africa’s youth believe they can solve problems collaboratively, and are hopeful of fighting corruption, achieving peace and improving their personal living conditions. 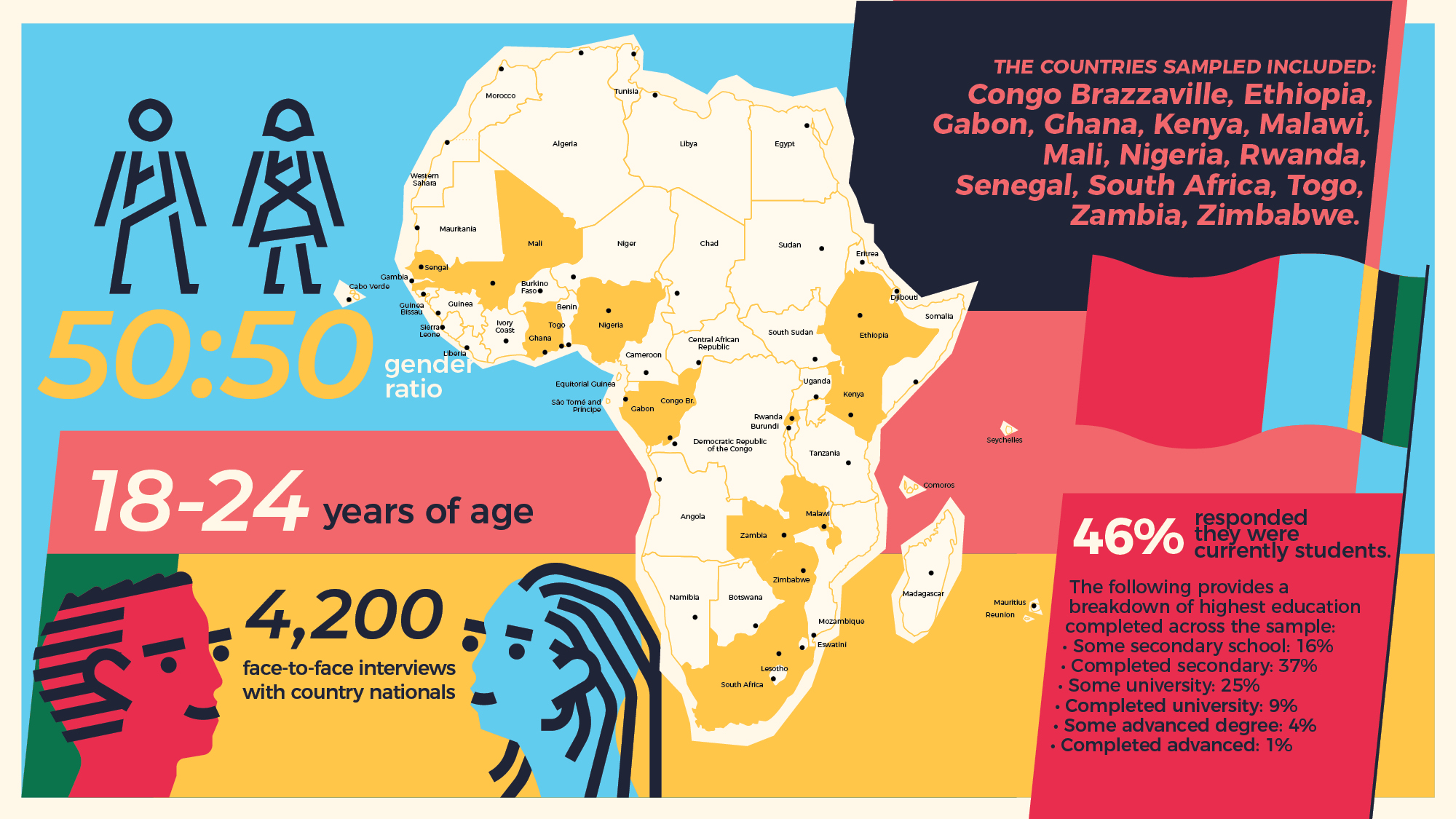 These findings, which are in stark contrast with global stereotypes and outdated narratives of a hopeless continent, were unveiled by the Ichikowitz Family Foundation, a leading African foundation encouraging active citizenship across the continent. 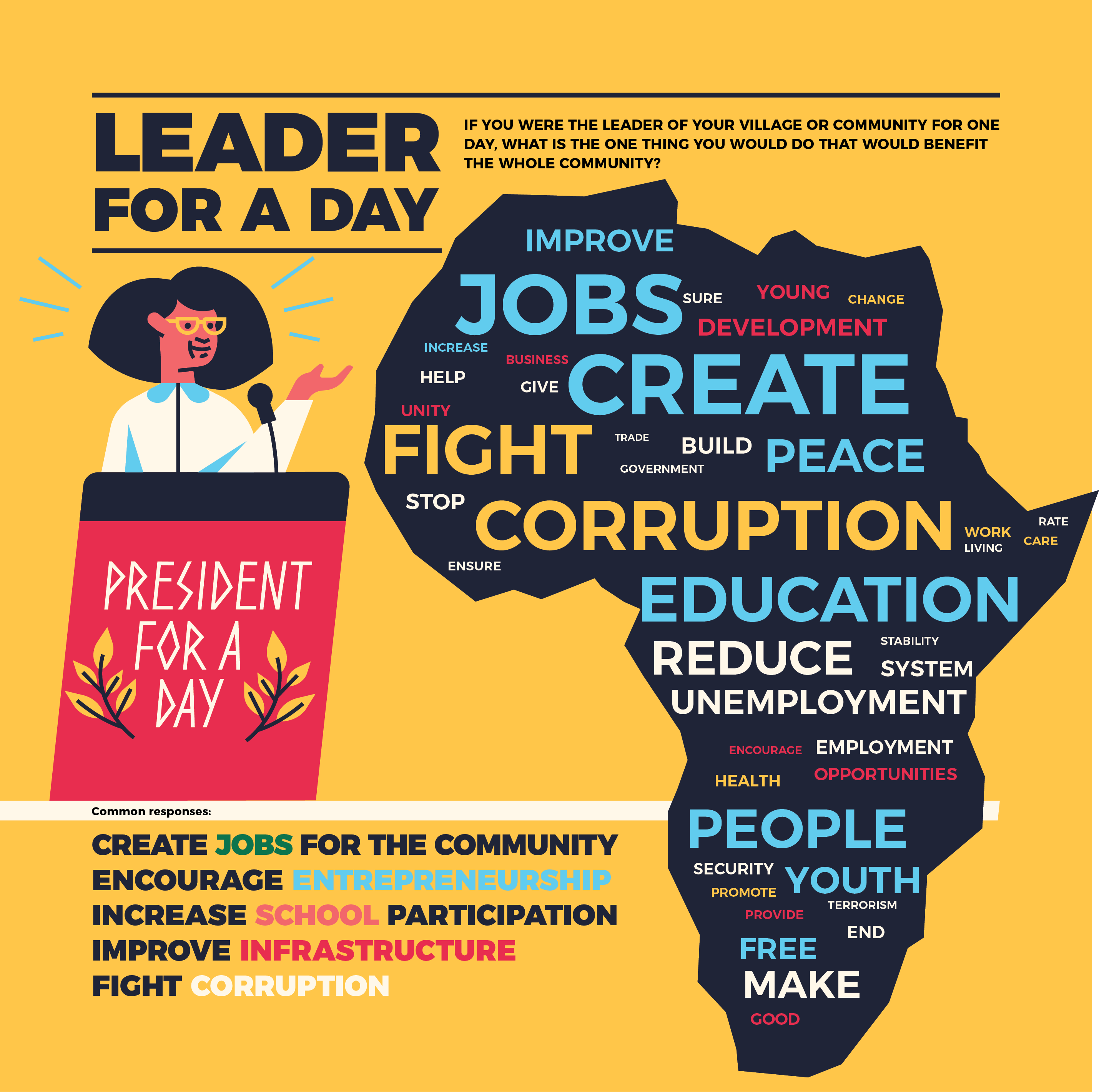 A loud wake-up call to all the Afro-sceptics

The African Youth Survey reveals young people who are self-starters, pan-African, digital and media-savvy, tolerant but mindful of the challenges that could blight their ‘African Century’, such as corruption, the lack of new jobs, limited start-up capital, water scarcity, fake news, terrorism and poor education systems.

They were asked their opinions on their identity as Africans; on social cohesion in their communities, on the environment; on political stability and democracy; on foreign relations; on entrepreneurship; technology and the media; and, their views of the future. 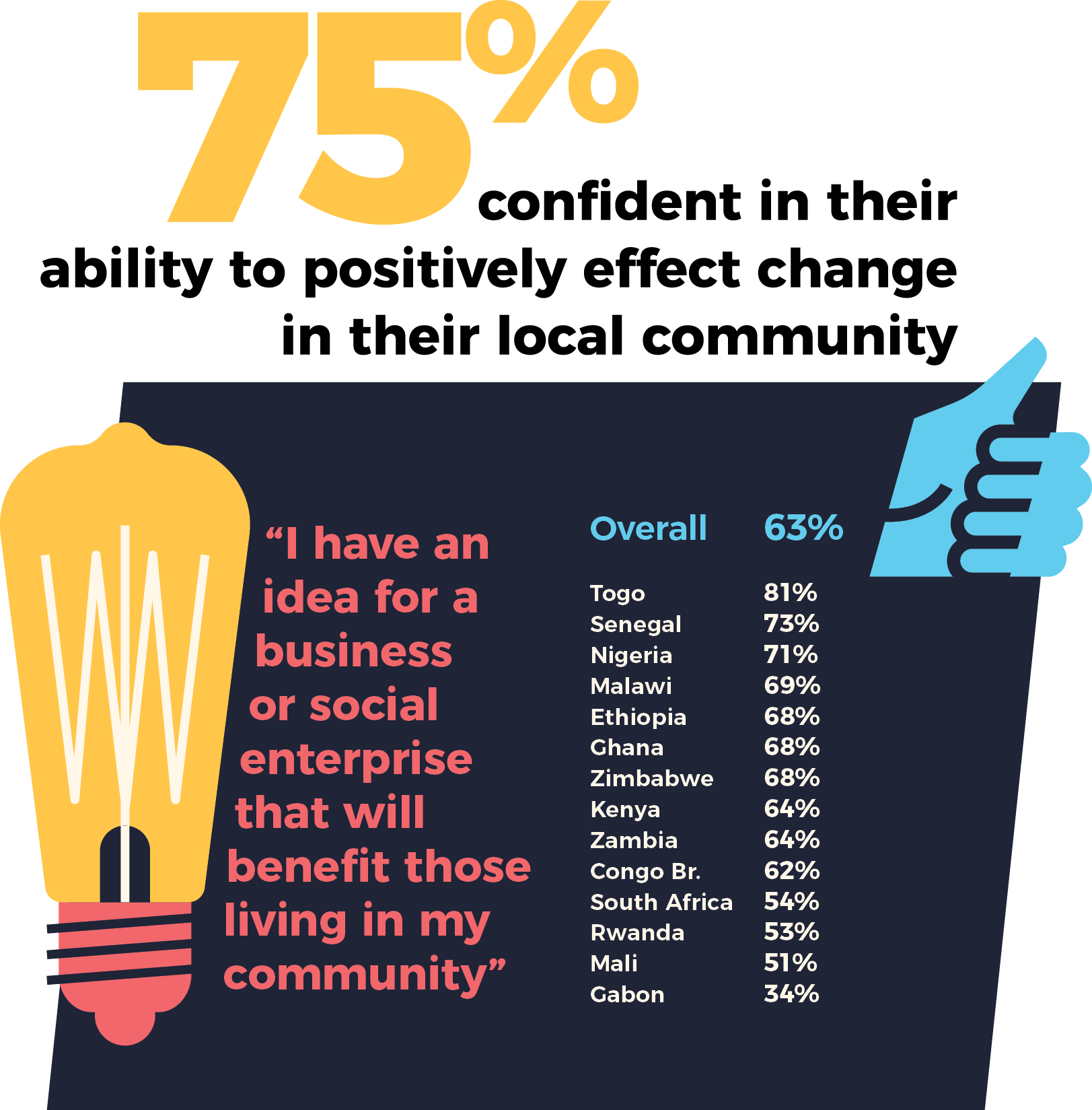 Ichikowitz Family Foundation Chairman, Ivor Ichikowitz said: “The results of the African Youth Survey are a loud wake-up call to all the Afro-sceptics. We have found that youth in Africa are imbued with optimism about the future – and want to shape their own destiny. We have found a youth that refuses to shy away from the very real challenges of Africa, that is honest about what needs to be done and what their role has to be to achieve this – and they are overwhelmingly keen to make that difference.”

“The Afro-optimism that’s flourishing among young Africans does not rest on hope, but on their ability to seize the opportunities provided by the modern world. The findings underscore entrepreneurship as the greatest aspiration of African youth, who are embracing digital technologies to shape their futures. If there were ever doubt in the ‘Africa-Rise’ narrative, this research provides us with strong evidence that Africa’s time is here, and that it will continue to rise – carried forward by a new generation of innovative, responsible and confident leaders.” 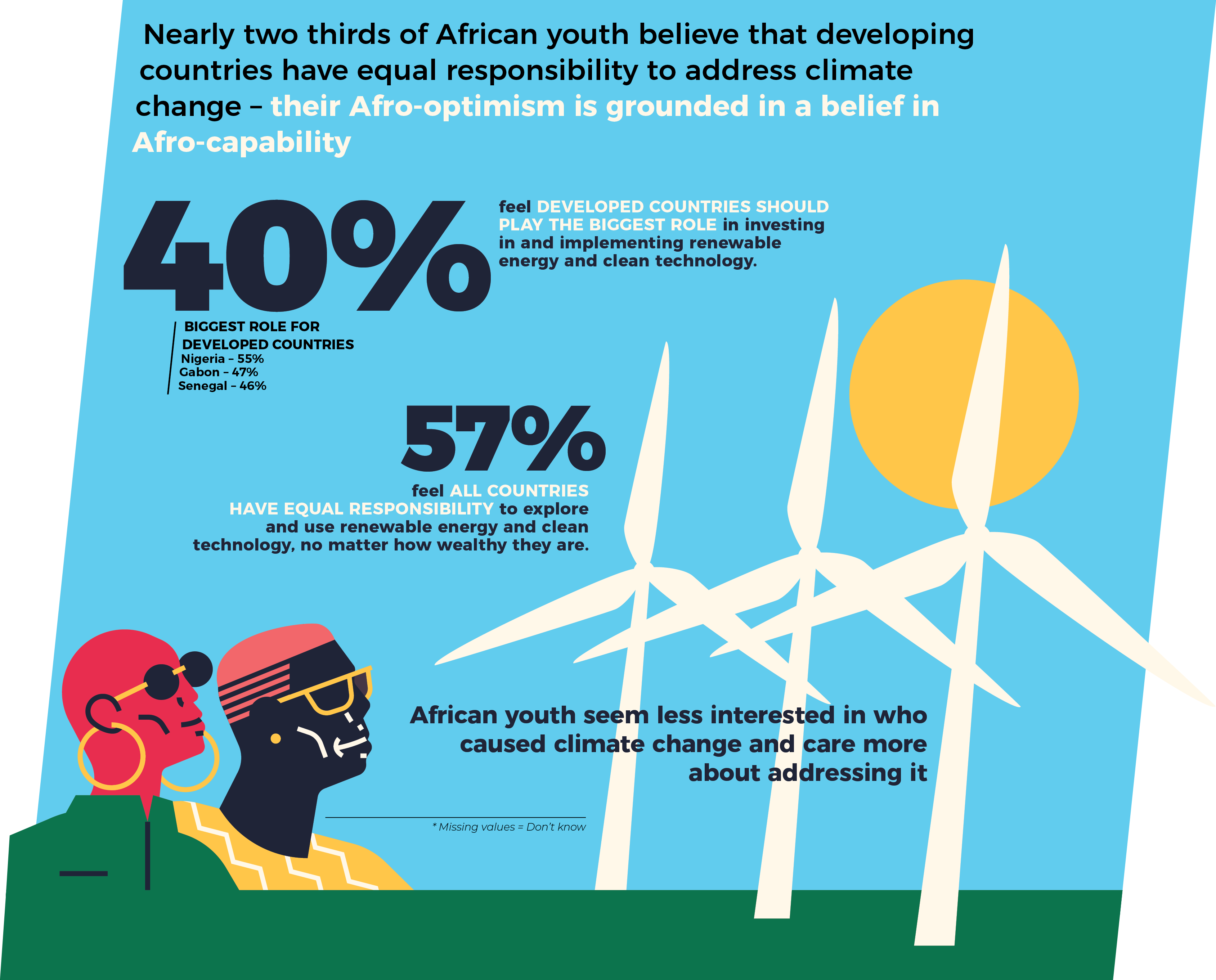 Former President of South Africa, Kgalema Motlanthe, a guest contributor to the report said: “I am encouraged by the youth of Africa’s common vision of a pan-African identity; of a love of their fellows that transcends colour, creed, class or nationality; and, of their commitment to fighting the corruption. I am immensely heartened too by their Afro-optimism, underscored by their belief in Afro-capability.”

“We have much work to do if we are to stand a very real chance of making the dream of the African Century a reality for our people, but this survey shows that in our youth, we have the very best chance yet, which truly is something to celebrate, to encourage and to look forward to.” 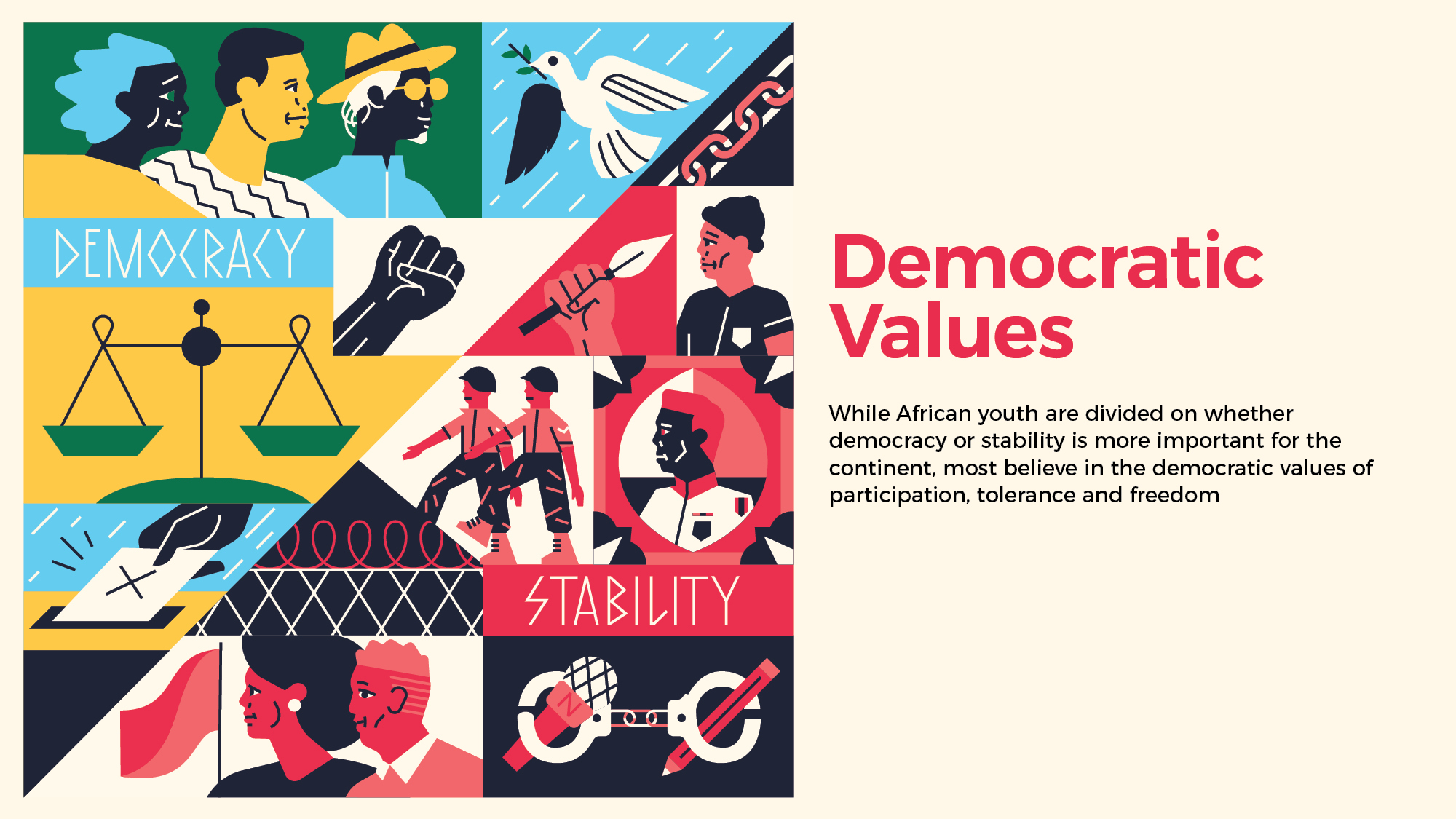 The results seriously challenge the old African stereotypes and cynics: 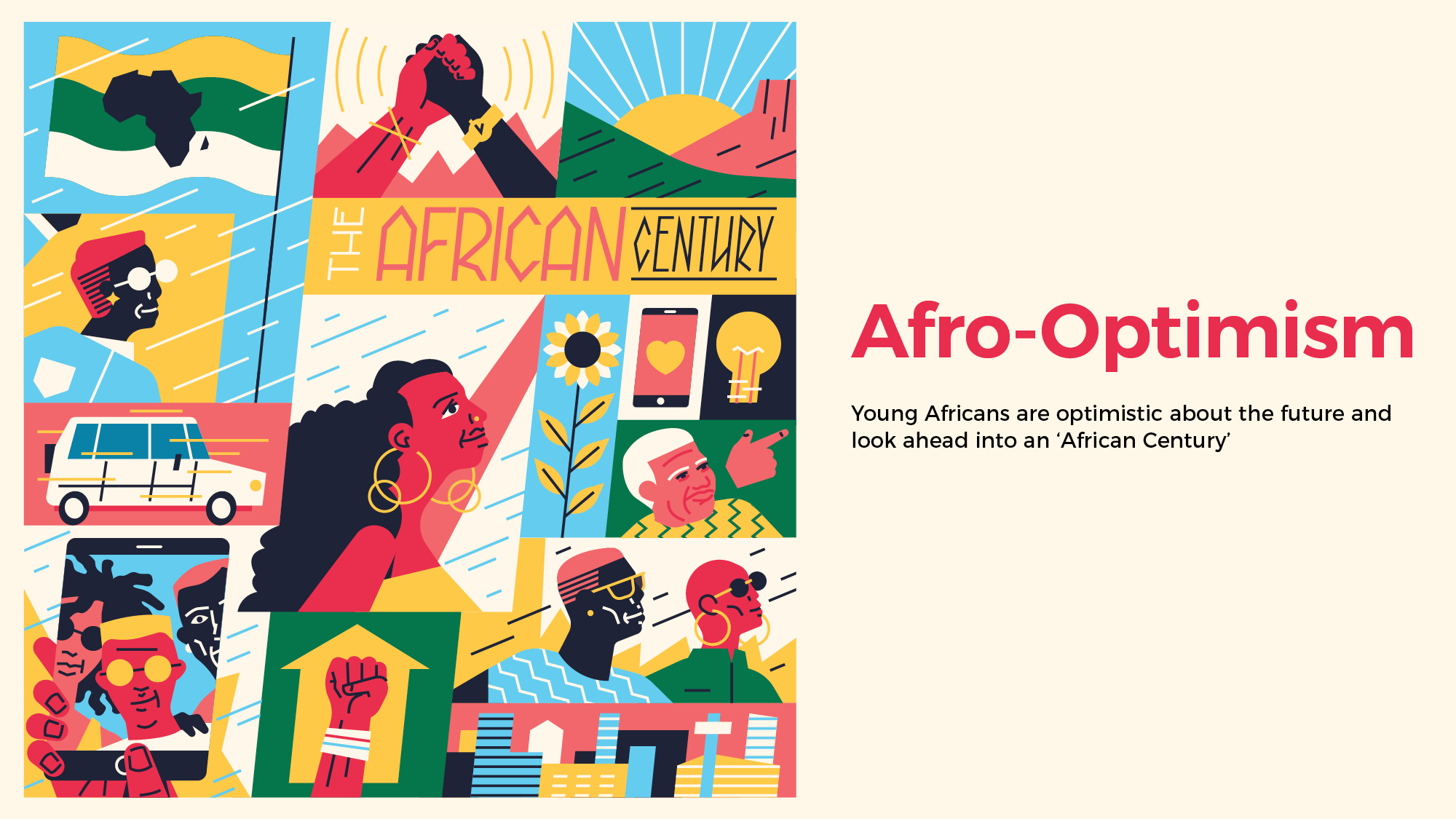 A roadmap for private and public sectors  in Africa

Robyn de Villiers, Founder and Chairperson of BCW Africa, the African network to the third-largest global communications agency, BCW (Burson Cohn & Wolfe), and the most established network of independent communications firms on the continent, describes this study as inspirational. “The Africa Youth Survey reveals the hopes, aspirations and concerns of African youth, but most importantly, it also brings to light the sheer optimism of the largest and fastest-growing demographic on the continent. These insights are extremely valuable for those in the private and public sectors – anyone doing business of any kind on the continent.”

Ichikowitz concluded: “Africa’s youth, measured just in sheer numbers, will be the world’s most important demographic in 30 years. The purpose of this study is to provide a roadmap for governments, policymakers, investors and young people across the continent, who will be the world’s largest source of human capital, consumers, entrepreneurs and innovators of tomorrow.  Ignoring their voices would be a catastrophe for the world.”

SINGAPORE - Media OutReach - 21 April 2021 - Cityneon Holdings ("Cityneon", the "Company"/collectively with its subsidiaries, the "Group") raised S$235 million in the most recent round of private funding. The latest round of funding adds seasoned investors to Cityneon's already strong stable of shareholders.

This funding round was led by Singapore's Pavilion Capital, Seatown Holdings International, EDBI, and Cityneon's Executive Chairman & Group CEO, Mr. Ron Tan. EDBI and Pavilion Capital are existing shareholders of Cityneon whilst new investors include Seatown Holdings International, Qatar's Doha Venture Capital, which will now own approximately 4 per cent of the Group, and other financial institutions and family offices in Singapore and China.

The Group is now well positioned for its next growth chapter and will use the proceeds for capital expenditure that includes building more of its various intellectual property (IP) exhibition sets, totaling 24 travelling and four semi-permanent sets under the Studio IP partnerships and three travelling sets under the original artefact IP partnerships by the end of 2022.

Already, the Group just signed its fifth IP rights with Avatar from 20th Century Studios last year. Amidst the anticipation from Avatar fans worldwide, Cityneon will debut a multi-sensory Avatar exhibition in Chengdu, China in May 2021, ahead of the Avatar movie sequel which is slated for release in 2022. Avatar is the world's top grossing film of all time at over US$2.8 billion, and adding millions more after its successful re-release in China in March 2021. Avatar's director James Cameron has announced that he will be producing four sequels with 20th Century Studios, with the first sequel slated for release next year. Disney acquired 20th Century Studios for US$71 billion in 2019.

The Company also recently entered the original artefacts IPs space and will stage international exhibitions of the treasures of the ancient civilization Machu Picchu from Peru in Boca Raton, Florida and Pharaoh Ramses II from Egypt in Houston, Texas. These two experiences will start welcoming visitors in October and November 2021, respectively.

Other IP rights that the Group holds include partnerships with Universal Studios for Jurassic World: The Exhibition, Marvel for Avengers S.T.A.T.I.O.N., Lionsgate for The Hunger Games: The Exhibition and Hasbro for Transformers Autobot Alliance. All in, Cityneon holds the IP rights for five of the top 10 worldwide box office hits and two artefacts IP from Peru and Egypt. The Group expects to have six sets of its various IP rights travelling across China, and five travelling and permanent sets in the United States, with a few more in other parts of the globe.

The Group will also be reopening experiences that were temporarily closed in 2020, aiming to provide visitors with a safe entertainment option. These include the Marvel Avengers S.T.A.T.I.O.N. in Toronto, Canada that will be re-opening in May 2021; and the Marvel Avengers S.T.A.T.I.O.N. exhibition in Lotte Mall in Seoul, Korea in April 2021; the same exhibition space which previously housed Jurassic World: The Exhibition, another IP experience exhibition by the Group in 2019. In the past month, the Group also witnessed record visitor numbers at their semi-permanent installations in Las Vegas, USA, signaling a strong comeback and demand for their immersive experiences, as they step into the 6th year of operations there.

While there are exciting plans lined up, the Group is not resting on its laurels. More Hollywood IPs and artefact IPs can be expected, and there will be further announcements on new IP verticals in entertainment experiences that the Group is looking to enter.

Mr. Ron Tan, Executive Chairman & Group CEO of Cityneon, said: "It is exciting that the Company is going through such strategic expansion as one of the largest providers of exhibition entertainment experiences globally. The S$235 million funding round sets a solid foundation for us to invest in developing more of our entertainment experiences, to stage even more exhibitions of the five box office hits and two artefact IPs that we hold the rights to all over the world. I'm thankful that our strong investors base, now from Singapore, Hong Kong, China and the Middle East, have trust in our vision, and believe alongside us that this space of big ideas and big experiences will only grow."

By the end of this year, Cityneon will arguably be the largest provider of exhibition entertainment experiences internationally; with global footprints in more than 50 cities and welcoming 10 million unique visitors across the world by 2022.

With its global reach and international partnerships, Cityneon has the capability to serve its clients anywhere in the world. Cityneon was listed on the Mainboard of the Singapore Stock Exchange since 2005, and was privatized on February 2019 by West Knighton Limited, a company wholly owned by Cityneon's Executive Chairman and Group CEO, Ron Tan, together with Hong Kong veteran entrepreneur and investor, Johnson Ko Chun Shun. Johnson is a capital markets veteran and has held controlling interests and directorships in many listed companies. In May 2019, Cityneon welcomed CITIC Capital as a new shareholder, who holds approximately 10% shares in Cityneon. CITIC Capital is part of CITIC Group, one of China's largest conglomerates, and has over US$25b of assets under its management across 100 funds and investment products globally. Other institutional shareholders of the Group include EDBI - a Singapore government-linked global investor, and Pavilion Capital - a Singapore-based investment institution which focuses on private equity investments, that made strategic investments in August and October 2019 respectively, to support the Group's further expansion globally. For more information, please visit www.cityneongroup.com.