…Health Workers On The Trail Of Victim’s Contacts

Lagos State Government has raised its level of response to Coronavirus (COVID-19) incident, following a reported case of a patient diagnosed with the infectious viral disease in the State in the early hours of Friday. This is coming, just as the Chief Incident Commander and the State Governor, Mr. Babajide Sanwo-Olu, allayed fears of residents on the spread of the virus. 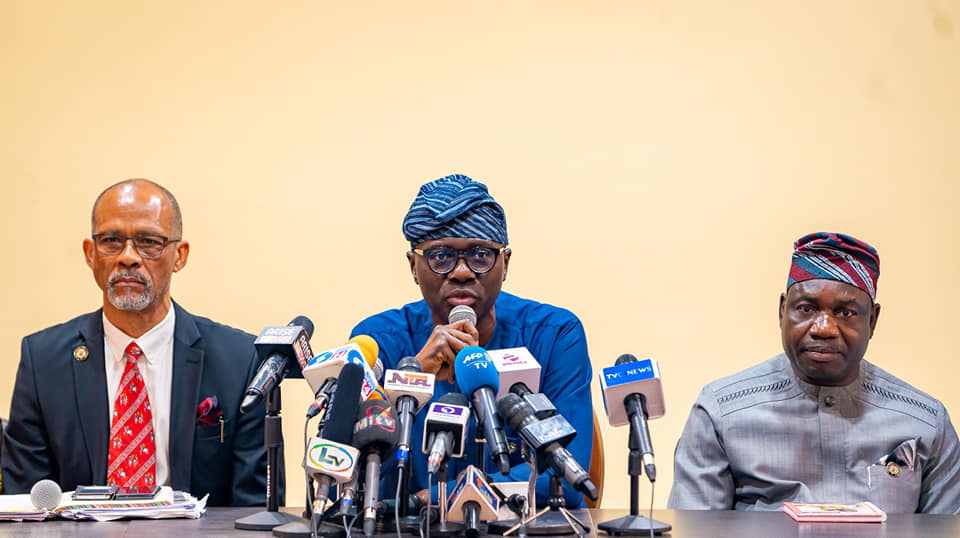 The Governor also offered more information on how the patient was identified and efforts currently being made to prevent the spread of the virus.

The patient, Sanwo-Olu said, is an Ogun State-based expatriate who flew into Lagos from Milan in Italy via Istanbul, Turkey last Monday evening. The Governor said the patient, whose name was not disclosed, remained in stable condition at the bio-security facility in Yaba, Lagos Mainland, where he is being isolated.

It was gathered that the patient, although, tested positive to the COVID-19 virus, is yet to show any respiratory symptoms at press time. He complained of fever and body pain, which prompted his transfer from Ogun State to Lagos for advanced medical investigation.

Sanwo-Olu said a number of persons, who had physical contact with the patient before the virus was diagnosed, are being traced, while others are currently being examined for possible symptoms.

The Governor shared these details during a first press conference held on Friday at the State House in Marina to brief the public on the matter. Top State officials at the conference included Commissioner for Health, Prof. Akin Abayomi, Commissioner for Information and Strategy, Mr. Gbenga Omotoso, Commissioner for Agriculture, Hon. Gbolahan Lawal, Secretary to the State Government, Mrs. Folashade Jaji and Director General of Lagos State Safety Commission, Mr. Lanre Mojola.

Sanwo-Olu said there should be no cause for panic among Nigerians over the reported COVID-19 incident, stressing that measures had been set in motion by the State and Federal governments to contain the spread of the virus across the country. He particularly allayed the fear of Lagos residents, saying the two bio-security facilities in the State had the capability to contain the virus.

He said: “At 10 pm on Thursday, I got a call from the Commissioner of Health, who reported possible identification of a patient with coronavirus in Ogun State. Immediately, we triggered all levels of bio-security responses and containment facilities. After series of laboratory examinations, the patient was confirmed to have tested positive to the virus in early hours of today (Friday) and we immediately alerted the federal authorities, including the President and everybody who needs to be aware. We are in constant touch with the company where the patient was engaged. The management and personnel of the company have been cooperative.

“Health workers and emergency officials are on the field to track all persons that had physical contacts and interaction with the patient. Our bio-security facilities have been fortified to continue any form of test and contain any other potential case. We are in constant touch with the Federal Ministry of Health to harmonize our response to the incident. For us in Lagos, we are doing anything that needs to be done. The patient is stable and every health intervention required is currently being given to him.”

On how the patient scaled through health screening at the Lagos airport without being detected, Sanwo-Olu said the investigation showed the virus did not manifest in the patient at the time he passed through the airport. The incident, he said, prompted the Government to immediately trigger advanced end-to-end screening for passengers flying into Nigeria, especially from high-risk countries.

The Governor said there would not be the prohibition of public gatherings and regular activities in Lagos despite the diagnosed case of COVID-19, pointing out that such measure may give rise to needless panic among the general public. He said the condition of the patient was not “highly contagious” at the moment, adding that the State would only ban outdoor gatherings in the case of escalation in the person-to-person transmission of the virus.

He said: “It is only when there is a high level of escalation that the public can be panicky and this is when we realize that it is getting to person-to-person transmission. As we have said, this isolated case has been contained right from the hospital where he was first admitted and the guesthouse he slept after his arrival in Nigeria. It is when there is a person-to-person infection that we can trigger another level of isolation and curtail public events where a large number of people can gather. I don’t think we have gotten to that level yet.”

Sanwo-Olu also cleared the air on why the patient was transferred to Lagos after the incident was reported in Ogun State, saying the Federal Government only established testing centers to prevent coronavirus in States that have international airports. Lagos, the Governor said, is the only state in the Southwest that has testing centers. He said the State was also considered based on its sophisticated bio-security facilities, which were established during the outbreak of the Ebola virus.

Prof. Abayomi explained how the diagnosis was carried out, following the patient’s complaint of fever and body pain. He said the patient started to show signs of illness on Wednesday afternoon, after which he was presented at the Ogun State-based firm’s hospital where the investigation began.

He said: “Investigation began at the hospital after the patient gave a history of his trip to Nigeria. The medical personnel at the company’s hospital kept the patient in isolation overnight and contacted us at the bio-security in Lagos for assistance. We immediately asked them to transfer the case to Lagos. The patient was brought to our high-containment in Yaba on Thursday morning.

“Immediately the patient arrived, he was put in proper isolation and appropriate tests were conducted on him. Within hours, we received signals that the laboratory tests were showing signs of positivity. At that point, we informed the Federal Minister of Health and Governor Sanwo-Olu, who is the Chief Incident Commander in Lagos.”

The Health Commissioner said the patient was responding well under a supportive therapy, saying efforts were on to identify all persons that had physical contact with the patient to break the cycle of transmission.

He disclosed that the State remained prepared to contain potential spread of the virus, observing that Lagos had wrapped up the capacity of its containment facility to 80-bed as a result of the emergency funds released by the Governor.

Prof. Abayomi said more capabilities were being put in place by the State to deal with increasing number of cases. He said an aggressive public awareness campaign was going on to sensitize residents on hygiene and activities that can prevent the spread of the virus.

A recent report published by the Project Management Institute (PMI) from its 2020 Pulse of the Profession data, shows that on average, about 11.4%...
Read more

Nearly one in two people worldwide (45%) say that Covid-19 is one of the top issues facing their country in March 2021, one year...
Read more
- Advertisement -