Dangote Cement Plc reported a revenue decline of 1% in its audited financial statement for the full year ended December 2019. Gross profit grew by 1% on the back of production cost optimization. Profit before tax (PBT) decreased by 9% driven by an increase in haulage, advertisement and promotion expenses while profit after tax (PAT) declined by 49% owing to a higher finance cost and a one-off tax credit of N133.72bn in FY 2018. Management proposed a dividend of N16.00k per share (FY 2018: N16.00k).

A harsh operating environment amid increased competition continues to wane on the group’s performance, as shown in the audited results for the full year ended December 31, 2019. The group’s revenue declined by 1% from N901.21bn in FY 2018 to N891.67bn in FY 2019 owing to a higher level of price discount and weak macroeconomic environment across markets. In Nigeria, revenue decreased by 1% YoY from N618.30bn to N610.25bn on the back of the decline in the average realized price per tonne from N43,610 to N43,222. Also, volume declined from 14.2Mt to 14.1Mt in FY 2019. We attribute the double whammy of price and volume decline to price discounting in reaction to competitor’s new capacity in a bid to safeguard market share and the sustained land border closure, which subtracted from export sales.

In Pan-Africa, the group grew volume by 2%, notwithstanding the technical challenges in Ethiopia – a key market. Sales in Ethiopia declined by 4% compared to FY 2018 as a result of shortages of limestone due to a significant issue with quarry. However, the considerable volume growth of 94%, 116% and more than 100% in Tanzania, Sierra Leone, and Senegal, respectively, was enough to offset volume loss in Ethiopia. Overall, though volume grew, revenue was relatively unchanged at N282.71bn in FY 2019.

On production cost, the group continues to maintain its cost leadership status in the industry with a production cost margin of 43% in FY 2019. In FY 2019, cost of sales declined YoY by 1% in tandem with revenue. Significant components of production cost were material and energy cost, each weighting 31% (FY2018: 32%) and 32% (FY 2018: 35%), respectively, where the group has continued to record efficiency. Consequently, gross profit declined by 1% while gross profit margin contracted by 100bps to 57% (FY 2018: 58%).

Read Also:  Nestlé Recognized For Its Leadership In Sustainability By UN Global Compact

We note the increasing competition in the industry as a result of capacity expansion by existing players which has in effect limited the group’s ability to grow volumes and raise prices. Despite the advertisement and promotional activities in Nigeria, sales volume was flat, and revenue declined on the back of price discounting. Looking forward, however, we expect the group to leverage its cost leadership status in the industry to match the competition. Also, we believe that the return to a regular budget calendar and the earmarked infrastructural spending by the government would bode well for the group. Overall, we have a one-year target price of N175.57k on the stock. At the current market price of N170.00k, the stock is trading at a 3% discount to our fair value estimate and offers a dividend yield of 8.47% (fully Franked). Thus, we recommend a HOLD.

The significant downside risk to our valuation is the coronavirus risk. 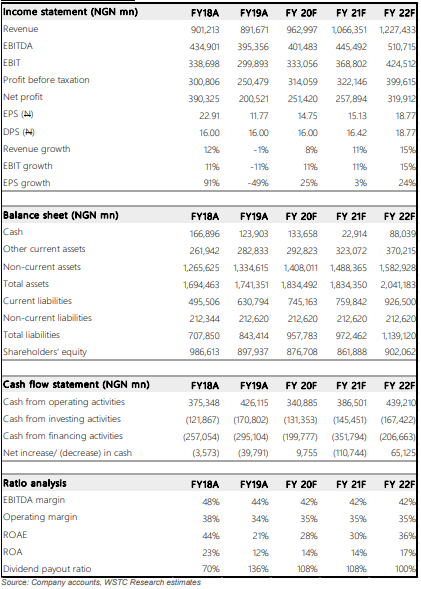