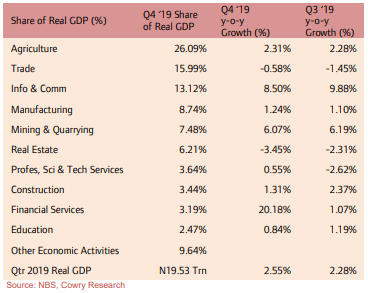 In other climes, the United States real GDP increased quarter-on-quarter by 2.1% in Q4 2019 (according to a “second” estimate), unchanged from Q3 2019 growth rate and the “advance” estimate for Q1 2019. However, on a y-o-y basis, real GDP grew by 2.3%. The quarterly increase in Q4 real GDP reflected positive contributions from personal consumption expenditures (PCE), federal government spending, exports, residential fixed investment, and state and local government spending that were partly offset by negative contributions from private inventory investment and nonresidential fixed investment. Imports, which are a subtraction in the calculation of GDP, decreased. Real GDP increased 2.3% in 2019 (from the 2018 annual level to the 2019 annual level), compared with an increase of 2.9% in 2018.

We welcome the increased diversification of the Nigerian economy due to the need to enhance fiscal revenue as well as the general wellbeing of citizens. The agricultural sector appears to be steadily growing in an increase in output amid increased government interventions while the burgeoning ICT sector continues to thrive as its relevance to other sectors is increasingly palpable. We, however, opined that Nigeria’s Q1 2020 real GDP may be negatively impacted by external shocks, especially from the expected weakness in global consumption as the world battles to contain COVID-19 virus. Currently, global crude oil prices, a major determinant of Federal Government’s revenues, have been on the declining trend owing to the global pandemic – Nigeria’s Bonny Light grade has shed 22.34% year-to-date and closed at USD5236 a barrel as at Thursday, February 27, 2020. Expansion in manufacturing and non-manufacturing activities slowed further in February with respective PMIs of 58.3 (from 59.2) and 58.6 (from 59.2) to suggest sluggish growth for Q1 2020. We expect the early implementation of the 2020 budget, especially spending on critical social infrastructure, as well as an anticipated increase in household consumption occasioned by the adoption of the N30,000 new minimum wage, to provide some support to growth in 2020.