March opens with the most-anticipated fixture in the LaLiga Santander calendar, ElClasico, with Real Madrid taking on FC Barcelona on 1 March in Spain’s capital. A global TV spectacle, the match will be broadcast in detail by 33 simulcast 4K HDR-HD production cameras located around the Santiago Bernabeu Stadium.

LaLiga, along with its official producer, MEDIAPRO, will use all of their technological prowess to once again make ElClasico the most spectacular televised football match on the planet, bringing the best football to every corner of the world and allowing the viewer to experience the match atmosphere as if they were sat right there in the stadium.

Matches from LaLiga take on another dimension thanks to being produced in 4K-HDR, which LaLiga uses for its biggest matches in partnership with the competition’s official producer, the MEDIAPRO Group. LaLiga is one of the few sporting events in the world that is broadcast in HDR which allows the viewer to enjoy the atmosphere of the game as if they were in the stadium. 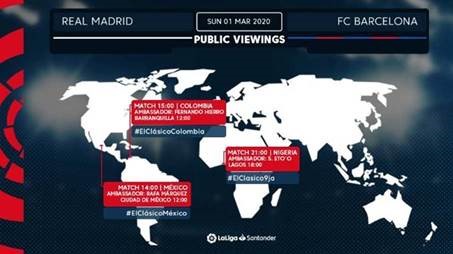 This is the technology that will be used to bring Real Madrid versus FC Barcelona to all corners of the planet:

This compact HD camera has a 2/3 wide-angle lens and a 14X zoom that broadcasts images by optical fibre from the playing field to the mobile unit. The camera can cover an area of almost 7,000 m2during periods without play (pre-match, interval and post-match).

Also, ‘Be The Player’ software, which debuted in the first leg of ElClasico in the 2017/18 season, puts the viewer in the same position as the player is located during a play. This angle lets the viewer see the action just as the player sees it on the playing field.

This tool also allows tactical and positioning changes and a deeper analysis of the moves to be displayed during action replays. Live 3D graphics are made possible both live and in replays thanks to tracking from three cameras.

182 countries around the world will be able to enjoy an immersive experience and high-quality football thanks to the technology used in the production and broadcasting of ElClasico, reaching a potential audience of more than 650 million people.

More than 23 accredited international television channels in territories such as France, MENA, USA, French Africa, Poland, Greece, Germany, Italy, Argentina, Belgium, Portugal, Brazil, India, China, Finland, Korea, Denmark, Sweden, Japan, and the Netherlands will witness the most-anticipated match of the season. This is in addition to the 210 broadcasters that will televise the match played between Real Madrid CF and FC Barcelona.

ElClasico, the star encounter of the most competitive LaLiga season in years

With just two points separating the two sides at the top of the table, this season’s title race ranks among the closest in recent memory, while the host of clubs in genuine contention for European spots has cemented LaLiga Santander’s status as one of the most competitive major leagues in world football.

The notion that any team can beat any other team on any given day has been proven week after week, with the likes of Levante UD, Granada CF and RCD Mallorca toppling Real Madrid and Barcelona already this season.

Factors behind this almost historic degree of competitivity are many but the two key medium- to long-term determinants have been LaLiga’s financial control regulations which, since 2013, have put clubs in a position to experience solid sustainable growth; and the centralised sale of TV broadcast rights which has seen LaLiga’s broadcast income jump from €600 million in 2015 to €1.865 billion today, a figure which is more evenly spread across its clubs.

As Real Madrid captain Sergio Ramos remarked earlier this season following a string of upsets across the league, “you can’t afford to be complacent about a single game regardless of who you’re up against… that’s what makes our league the best in the world.”

As we stand, the whole world is moving away from fossil fuels. By 2050, our crude oil will be...
Read more
Business & Economy

The domestic equity market recorded its biggest gains since May this week, as it closed positive in all the five trading sessions. The impressive performance...
Read more
Business & Economy

Major stock markets across the world this week witnessed significant profit-taking, as investors thronged towards safe-haven assets. This came as the fair of a possible...
Read more
- Advertisement -

Millions of football fans around the world tune in to watch every Clásico and that includes those who are most devoted to the two...
Read more
- Advertisement -