Measures include redundancies and voluntary pay cuts taken by more than 3,000 staff.

“After a good start to the year, with growth outside of China in January and February, our business started to be materially impacted by COVID-19 in March. Our response has focused on four areas: the health of our people, serving our clients, helping to mitigate the impact of the virus on our communities, and ensuring WPP is financially strong.

“Close to 95% of our 107,000 people are working from home, providing uninterrupted service to clients, helping them to communicate their own actions, sustain their brands and develop new ways to market their products. We have also won $1 billion of new business in the first quarter, including the global integrated Intel account, creative duties for Discover and the media accounts for Hasbro and Novo Nordisk.

“We have witnessed a decade’s innovation in a few short weeks, with the way people meet, shop, work, and learn increasingly reliant on technology. We are seeing clients rapidly shift emphasis and budget into digital media and direct-to-consumer channels and continue marketing technology investments. And, while many clients are significantly impacted by a reduction in consumer demand, other sectors such as packaged goods, technology, and food retail brands have been more resilient. As in previous downturns, those who are most prepared and most far-sighted will be at an advantage when we come through the current situation.

“At a time of great uncertainty, I am very proud of how our people and clients have responded. Despite the economic challenges that will, no doubt, be with us for some time, the way we have come together gives us real confidence in our future.”

Revenue from continuing operations in the first quarter of 2020 was £2.8 billion, -4.9% compared with the same period last year on a reported basis and -4.6% on a constant currency basis. LFL revenue was -3.8% compared with last year. 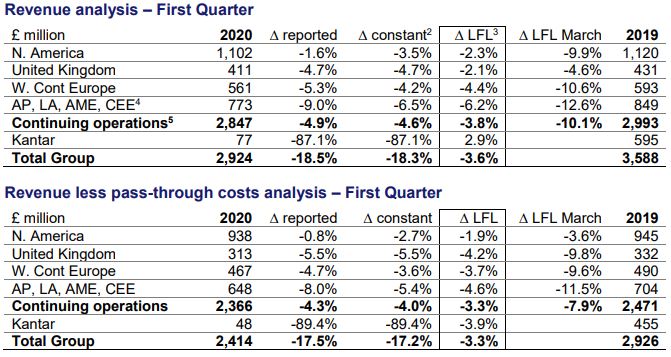 In March, LFL revenue less pass-through costs were -7.9% as the impact of COVID-19 began to be felt more widely across our business.

North America, with LFL revenue less pass-through costs -1.9%, was the best performing region in the first quarter, showing a further improvement in trend over the second half of 2019. This reflects the lapping of some significant assignment losses from 2018 and improved new business performance in 2019. VMLY&R, Grey, and GroupM all grew in the region during the period. March showed a slight deterioration in trend, as expected.

In the United Kingdom, LFL revenue less pass-through costs were -4.2%, with March -9.8% as the impact of the lockdown began to have an effect on client spend.

Western Continental Europe saw LFL revenue less pass-through costs of -3.7%.
Performance varied significantly from market to market, with countries such as Spain and Denmark continuing to trade relatively well despite widespread lockdowns, and other markets such as Italy showing a marked deterioration in performance during March.

In the Asia Pacific, Latin America, Africa & the Middle East and Central & Eastern Europe LFL revenue less pass-through costs were -4.6%. The Asia Pacific was the weakest sub-region, reflecting the COVID-19 impact on Greater China, but Africa & the Middle East grew strongly and Central & Eastern Europe was also up year-on-year.

Kantar, the world's leading data, insights and consulting company, announced the promotion of Adeola Tejumola to lead the insights division of Kantar in the...
Read more