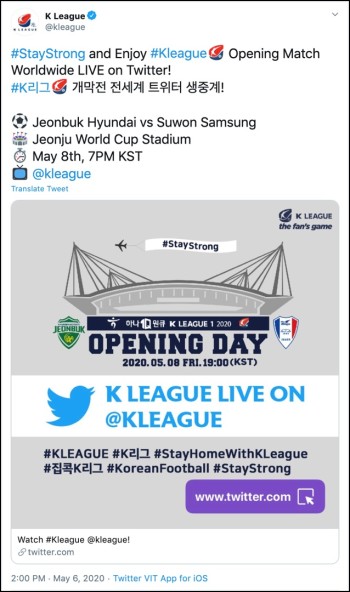 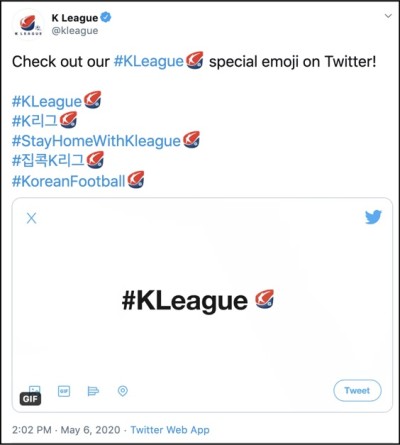 SEOUL,
SOUTH KOREA – Media OutReach –
6 May 2020 – Watch the opening match of the K-League (Korea Professional
Football League) in real-time as it is showcased worldwide on Twitter.

The K-League will
live-stream the opening match of the 2020 Hana 1Q K-League 1 from Jeonju World
Cup Stadium on May 8 at 7:00 pm Korean Standard Time on its official Twitter
account (@KLeague). The special live
broadcast promotion for the opening match is sponsored by Hana Bank, the
K-League title sponsor, and overseas promotion is supported by overseas agency,
Sports Radar.

While this match will be
played without an offline audience due to COVID-19, football
fans around
the world are invited to become cyber spectators. This is expected to be an
important opening match because of the showdown between last year’s K-League 1
champions, ‘Jeonbuk Hyundai Motors (@Jeonbuk_hyundai)’, and last year’s FA Cup
winners ‘Suwon Samsung Bluewings (@bluewingsfc)’.

Korea is resuming
professional sports games since worldwide sporting events including the Olympic
Games were postponed or canceled due to the COVID-19 pandemic. The opening of
the K-League season, without any fans in attendance, is expected to spark
global interest in Korea again.

The K-League has prepared
various measures to protect the players. Detailed directions will be
continually reinforced through several procedures such as fever checks, careful
management of all player movements, and numbering the drinks of each player. In
addition, K-League financed and managed COVID-19 testing for a total of 1,142
K-League players and coaching staff in order to operate the league and games
safely.

Yeon Jeong Kim, Head of the
Global Kpop & K-content Partnerships at Twitter said, “We look forward to
sharing the K-League’s high level of football with the rest of the world to
help worldwide football fans get their fill of new matches and overcome
COVID-19 at home together. Live-streaming the K-League opening match on Twitter
will be a good opportunity to grow the popularity of the ‘Korean Sports’ across
the world following K-POP, K-Movie and Korean Election Broadcasting.”

Twitter has provided a
special emoji to mark the opening of the K-League. The K-League emoji will be
automatically generated in tweets using the following hashtags to add more fun:
#KLeague #K리그 #StayHomeWithKLeague #집콕K리그 #KoreanFootball.

Twitter, Inc. (NYSE: TWTR) is what’s happening in the
world and what people are talking about right now. On Twitter, live comes to
life as conversations unfold, showing you all sides of the story. From breaking
news and entertainment to sports, politics and everyday interests, when things
happen in the world, they happen first on Twitter. Twitter is available in more
than 40 languages around the world. The service can be accessed at twitter.com, on a variety of mobile devices and via SMS. For more information,
visit about.twitter.com or follow @TwitterKorea. For information on how to download the Twitter and Periscope
apps, visit twitter.com/download and periscope.tv.