The NBS stated that the IGR was generated from five main revenue sources: Pay-As-You-Earn, direct assessment, road taxes, Ministries, Departments and Agencies, and other revenue.

The IGR made by the states excludes the monthly allocation that they received from the Federation Accounts Allocation Committee. 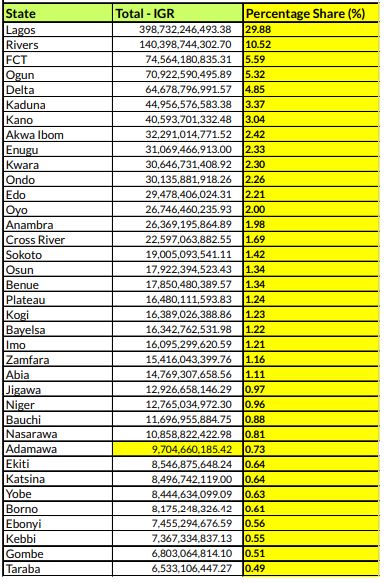 Nike Releases New Film “For Once, Don’t Do It” in a message about racism in America

In a bold move, Nike opens the tough conversation that so many corporations turn blind eyes, deaf ears and...
Read more
Business & Economy

In a shocking turn of events, the Monetary Policy Committee (MPC) cut its key policy rate MPR by 100bps to 12.50%, having maintained the...
Read more
Beverages: Alcoholic & Non-Alcoholic

The Nigerian economy grew by 1.87% on a year-on-year (YoY) basis in Q1’20. The GDP performance represented a 23 basis points decline from the...
Read more
- Advertisement -

The National Bureau of Statistics (NBS), says the total value of capital importation into Nigeria stood at $5,854.38m in the first quarter of 2020....
Read more
- Advertisement -