The Governor of Ekiti State, Dr Kayode Fayemi, on Monday, signed the Revised/Supplementary Appropriation Bill of N91.128bn into law, in response to the prevailing economic challenges occasioned by the unprecedented fall in the price of crude oil and other prevailing economic indices. 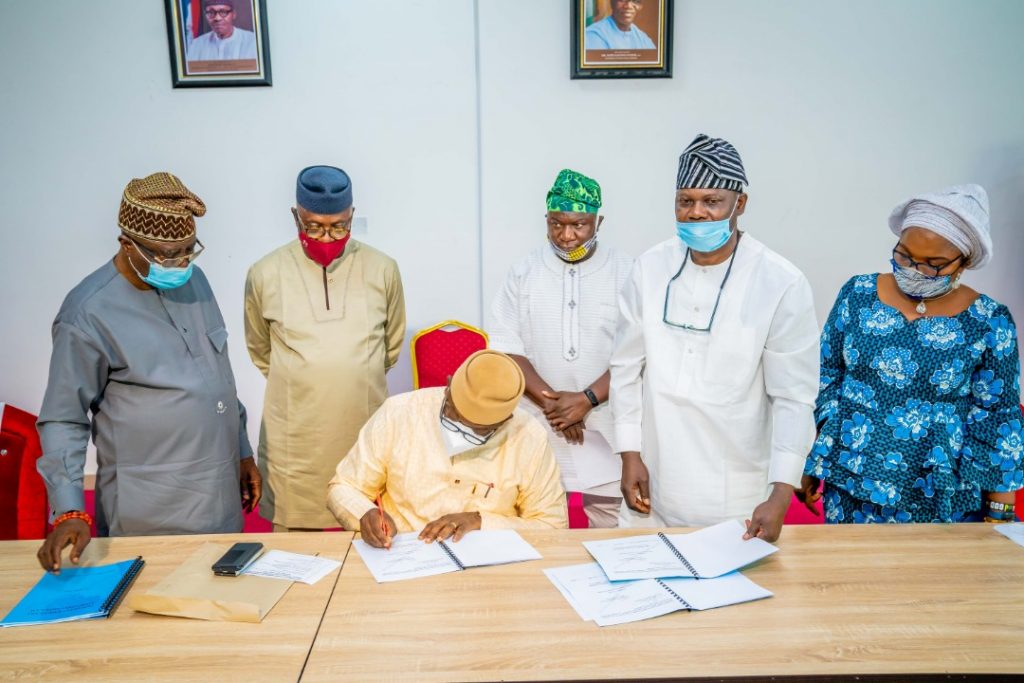 Dr Fayemi assented to the revised/Supplementary Appropriation Bill at the Conference Hall, Governor’s office, in line with Covid-19 protocol, which permits very few numbers of attendees, with strict observance of physical distancing. 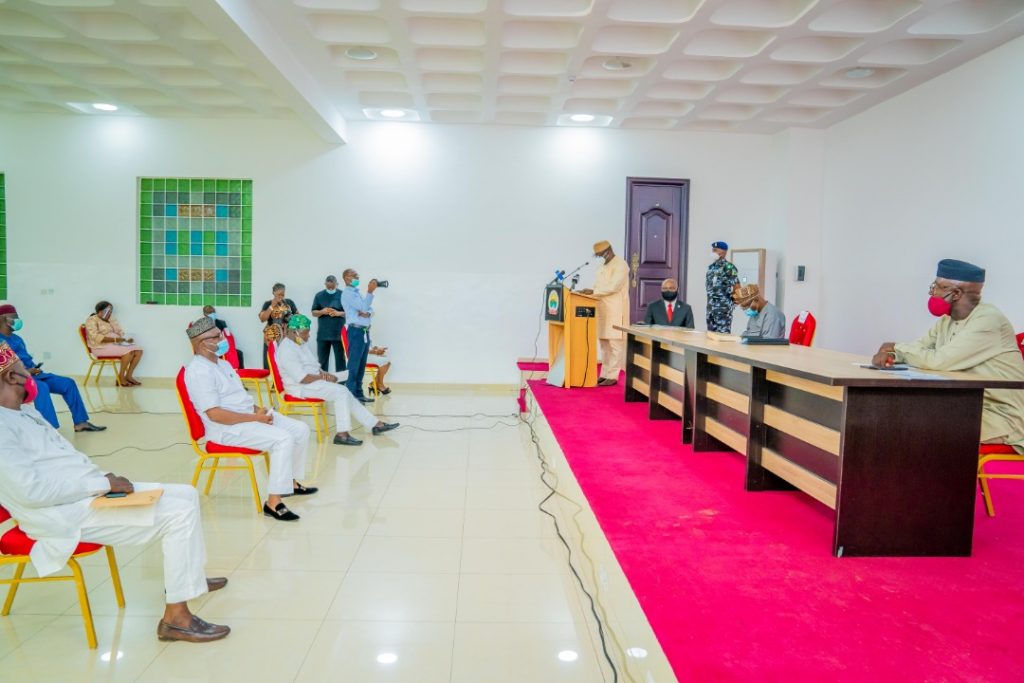 This, he said, was made up of recurrent expenditure of N59.63bn and capital expenditure of N32.65bn, representing a ratio of 55:35 percent, in response to the exigency of the State finances and the current economic realities.

Dr Fayemi explained that the revised/supplementary budget becomes expedient, as a result of the outbreak of Coronavirus, which “dealt a debilitating blow on our macroeconomic projections,” making the initial budget which was prepared in the “underlying assumption of the relative stability of major macroeconomic parameters”, unrealistic. 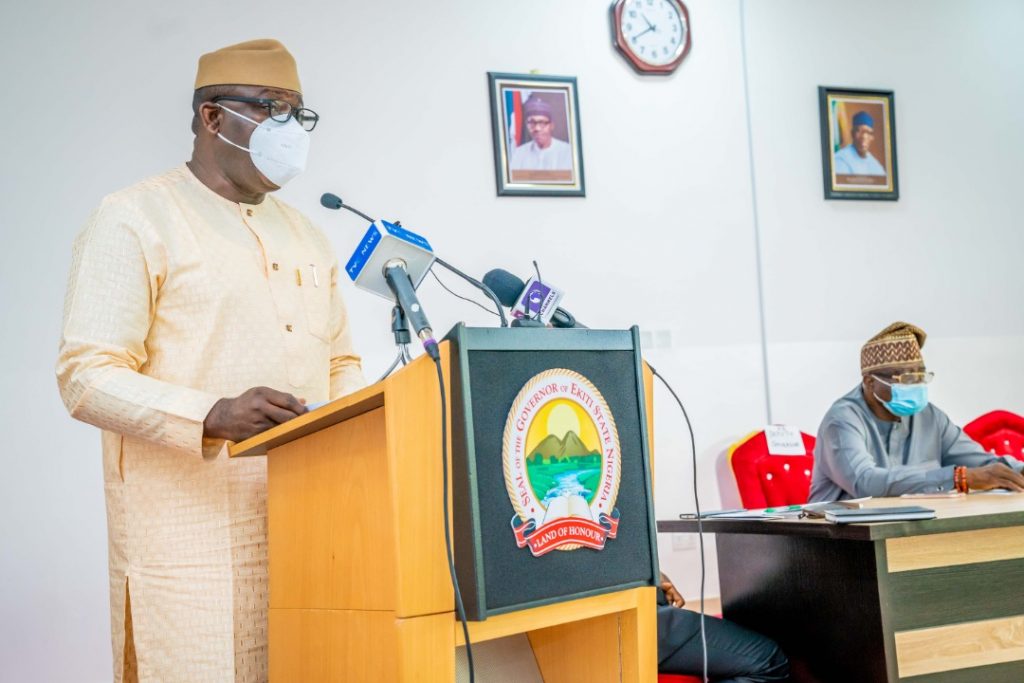 He said: “The pandemic rendered our economy prostrate with an unprecedented fall in the price of crude oil in the global market. The volatility in the oil price coupled with the reduction in oil production, and devaluation of the Naira to the Dollar, made our revenue projections for the 2020 Budget unrealistic.”

“To mitigate the effects of the pandemic on our economy, it becomes imperative to review our 2020 budget, and prepare a supplementary budget which would be responsive to our time and circumstances.” 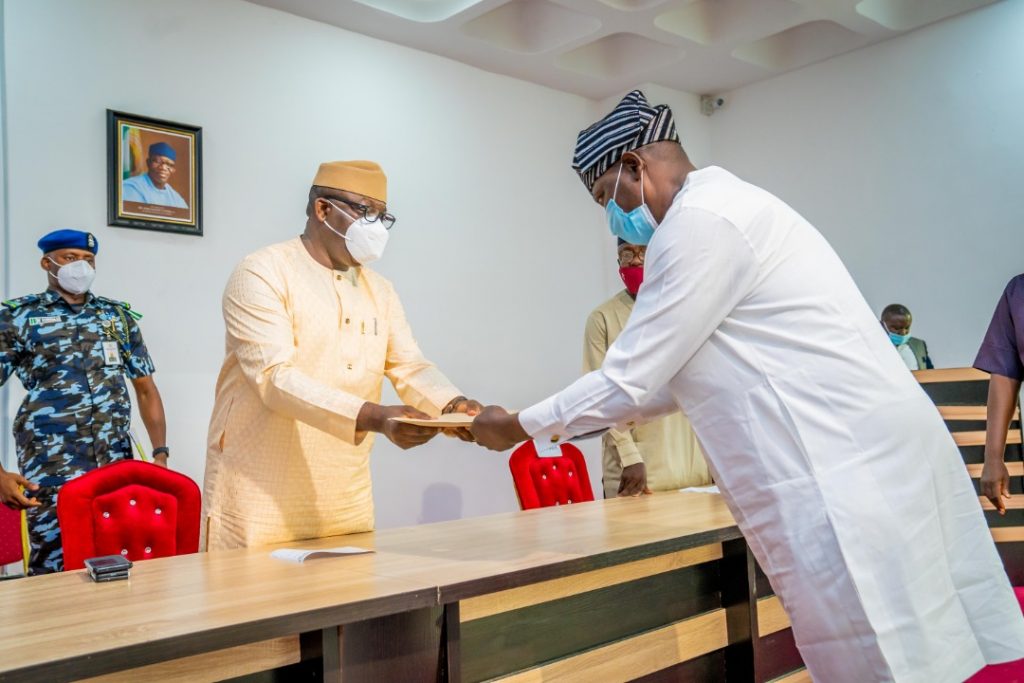 “Consequently, 2020 budget was put together to ensure that our meagre resources were committed to critical areas of the economy as follows: Health and Environmental Response, interventions with a view to improving the standard of living of the people, ensuring food security in the Agricultural sector, improving the ease of doing business, and other multi-sectoral Responses.”

Speaking further, the Governor disclosed that the budget was designed to also focus on critical legacy projects, after taking into cognisance the dwindling revenue accruing to the State from the federation account.

Read Also:  What will 5G really mean for you? 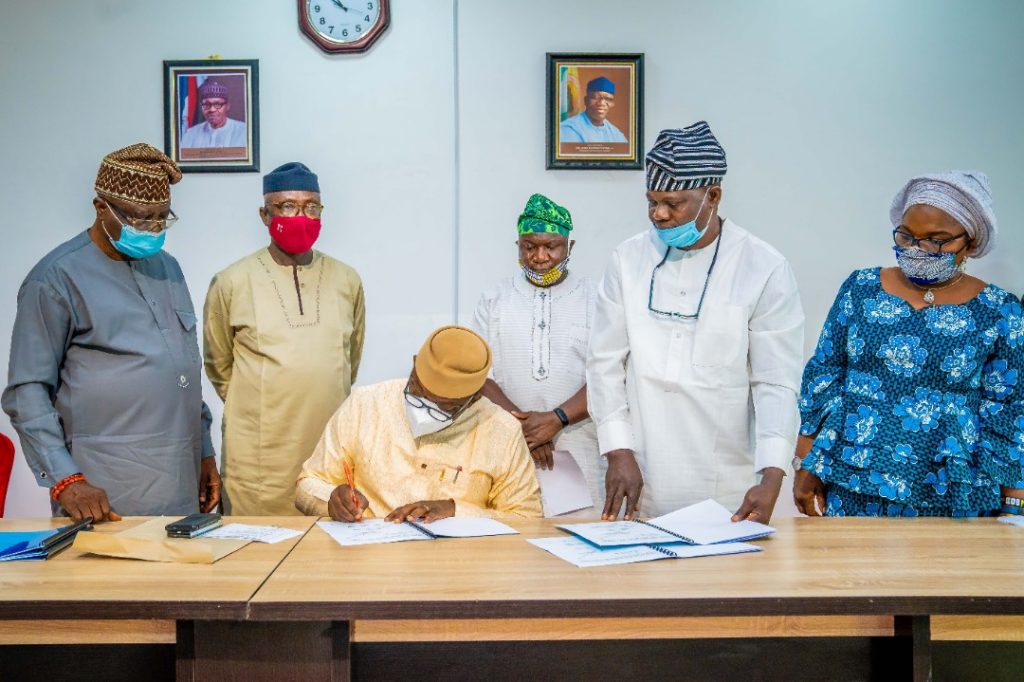 Revealing that the Revised/ Supplementary budget incorporated the guidelines for the State Fiscal Transparency and Accountability (SFTAS) Programme-for-Result, Dr Fayemi stressed that the current economic situation does not give room for “frivolities” but sacrifice, charging all Ministries, Departments and Agencies (MDAs) and other stakeholders to maintain budget discipline in the execution of the budget.

The Governor, commending Members of the House of Assembly for expediting action on the passage of the financial bill, revealed that the budget was the outcome of a wider community and public engagement. 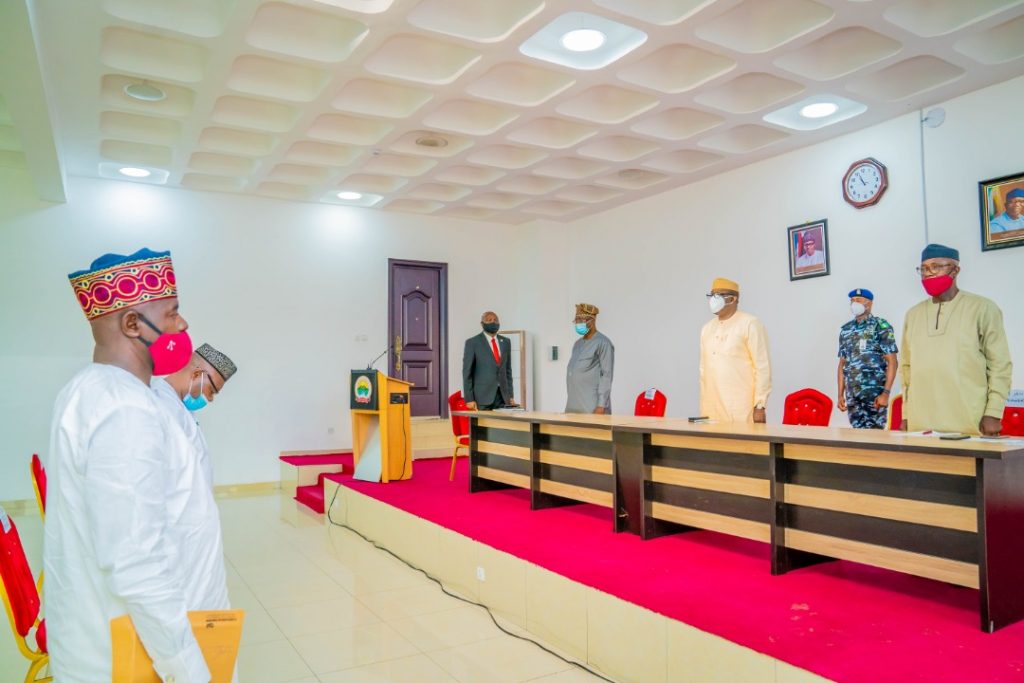 The brief ceremony was witnessed by the Deputy Governor, Otunba Bisi Egbeyemi, Speaker of the House of Assembly, Rt. Hon. Funminiyi Afuye, Deputy Speaker, Hon. Hakeem Jamiu, members of the State House of Assembly, Secretary to the State Government, Biodun Oyebanji, Head of Service, Mrs Peju Babafemi, and other Stakeholders.

Earlier in his address, the Speaker of the Ekiti State House of Assembly, Rt. Hon. Funminiyi Afuye said the revised/supplementary budget was passed by members of the House of Assembly, following due consultation with relevant MDAs and other stakeholders, in cognisance of the current economic reality of the country as affected by the outbreak of Coronavirus. 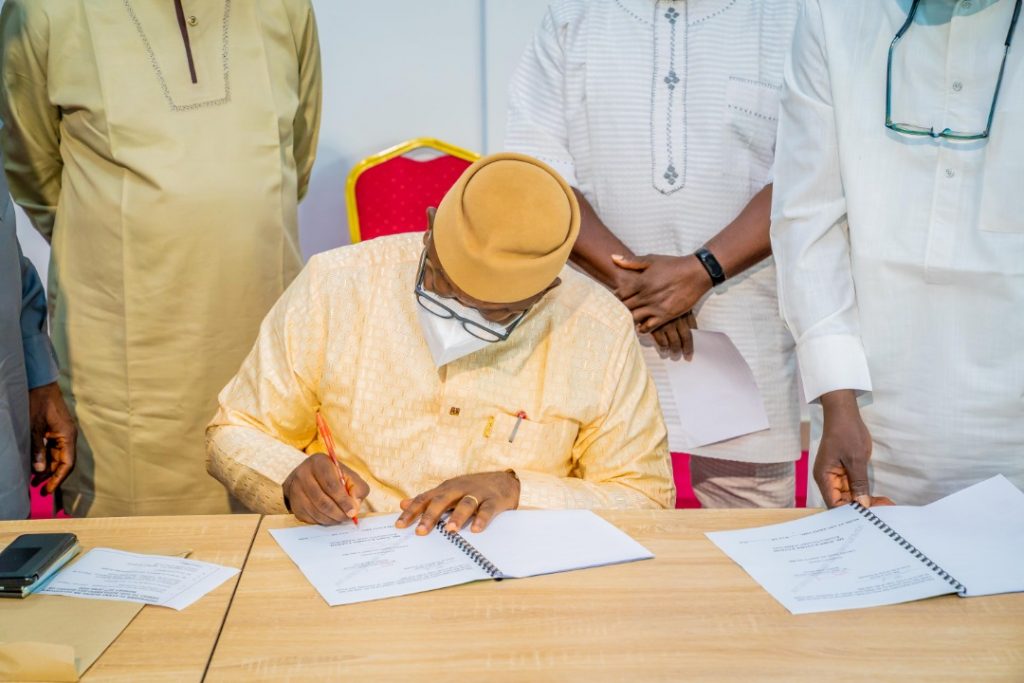 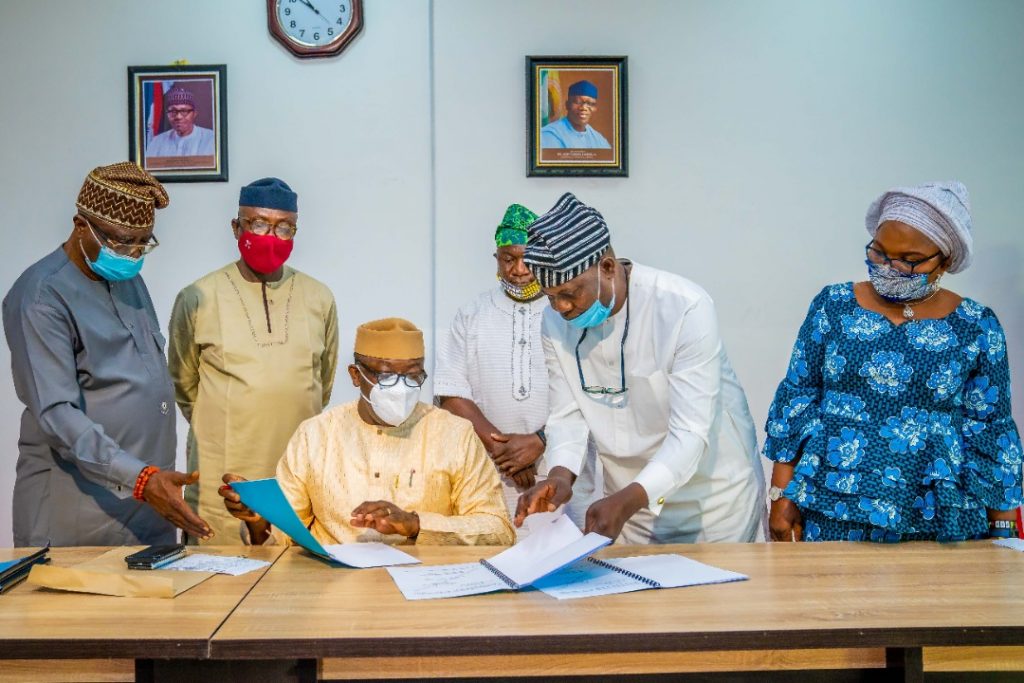 Leading Japan with 60% market share, Amaten to become the next Amazon in the gift card industry, estimated to...
Read more
MEDIA OUTREACH

SINGAPORE - Media OutReach - 10 August 2020 - In 2020, with uncertain times taking the world by a storm, many businesses have fallen victim to the pandemic and...
Read more
Business & Economy

From the onset of the Coronavirus, there has been the unuttered and unmet request from our children, “We miss our friends, we want to...
Read more

While many countries slowly ease the lockdown measures that were implemented because of the Coronavirus pandemic, the interest to domestic and international travel starts...
Read more
- Advertisement -