The final deadline for the Gerety Awards is on July 17, with winners announced later in the year, a benchmark for creativity’s future in a time when sharp lines are being drawn between words and action on the topic of equality.

The Gerety call for entries campaign saw purple moustaches sent to prominent female leaders in the advertising industry, asking them to pose for a picture with the question: What does a woman have to do to get onto an advertising jury? 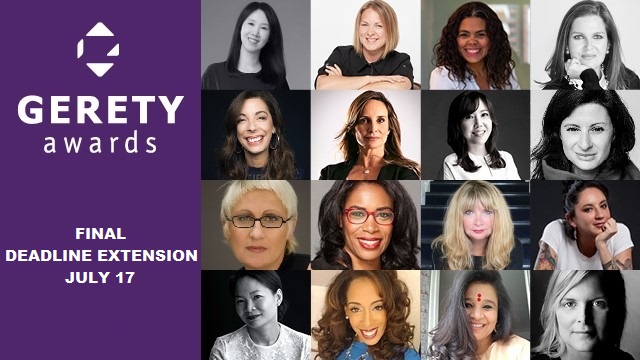 Svetlana Copic, Founder of No Agency, which created the campaign for Gerety, had this to say: “As a festival with the unique approach to gender equality, Gerety Awards had both the credibility and the courage to turn its call for entries into something much bigger. After decades of the ‘one girl in the jury’ situation, change has finally started to happen, but this is just the beginning and we need to keep the conversation going. Sometimes, mocking the status quo is the best way to change it.”

“There are still award shows where the jury is composed of less than 20% female jurors,” said the Gerety Awards’ Lucía Ongay. “This reinforces our purpose and calls for entries campaign, but it also begs the question: If Gerety can have a 100% female jury, why can’t others at least try to get to 50/50?”

The 2020 Gerety jury includes more than 180 agency and brand leaders from around the world. The winners will be announced in October. The absolute final deadline for entries is midnight Paris time on Friday, 17 July.

Read Also:  Gerety Shortlist To Be Announced Next Week Followed By Live Jury Panels Around The World

Named for Frances Gerety, the copywriter who coined the slogan “A diamond is forever,” the Gerety Awards sets the highest benchmark for creativity in advertising. All media types can be entered into any of the Gerety Awards’ 10 categories, titled CUTS (like a diamond): Media, Innovation, Entertainment, Communication, Craft, Experience, Works for Good, Health, Pharma and Portfolios. All advertising works broadcast between January 2019 and the deadline are eligible for entry, and works are judged on two criteria: originality of the idea and quality of execution.

The Gerety 2021 deadline has been extended until April 30 and a new category for humor is announced. The humor category will celebrate the best...
Read more

Gerety Awards has been billed to honour Nigerian creatives and in its usual practice, the organizer of the awards has selected a set of...
Read more

Gerety Awards which has been redefining advertising and communications by setting a new benchmark in creative awards with its all-female power jury offers a...
Read more
- Advertisement -