Formula 1® is back: the 2020 season is due to restart in Austria

With the first of two race weekends at Spielberg following the coronavirus-induced hiatus, Formula 1® is poised to kick off the 2020 season, which will see the pinnacle of motorsport celebrate its seventieth anniversary. The two races in Austria are the first in a revised racing calendar which Formula 1 has put in place based on the current situation. Initially, eight races in six different locations, including two triple headers, will be held in Europe over the summer, with more locations to be announced. Additional safety measures to protect against coronavirus will be put in place both during the race weekends and in the logistics for which DHL is responsible as the official logistics partner.

Formula 1 and its partners and promotors have worked carefully in the past few weeks to ensure a secured return to racing. Strict measures will be taken to protect all those involved and include regular testing and social distancing, as well as closed events with no spectators and fewer operational staff on site. As the official logistics partner, DHL has also taken extensive measures to ensure that its logistics processes are safe and that all of the respective countries’ requirements for protection against COVID-19 are met. This also includes regular testing, the wearing of masks and regular disinfection of work materials and equipment in a dedicated zone.

With its tightly rescheduled racing calendar, the anniversary season also brings logistical challenges. For the first time in F1 history, there will be two triple headers – three races on three consecutive weekends – in one season with the races in Austria and Hungary as well as in the UK and Spain taking place in direct succession. The tight scheduling involved in triple headers presents a particular challenge for logistics, but thanks to decades of experience, DHL is well equipped to meet this challenge.

Read Also:  COVID-19: Half of African Business Leaders Do Not Think that African Governments Are Taking Women's Issues into Consideration - Poll

“We are delighted that Formula 1 is now able to kick off its 70th anniversary season,” says Paul Fowler, Vice President Global Motorsport, DHL Global Forwarding. “The tightly scheduled racing calendar over the summer, including two tripleheader races, makes speed and maximum precision all the more important in Formula 1 logistics. At DHL, we responded very quickly to the risks posed by the pandemic and are ideally equipped to offer safe, fast and reliable logistics in Formula 1 even under these extraordinary conditions,” he adds. 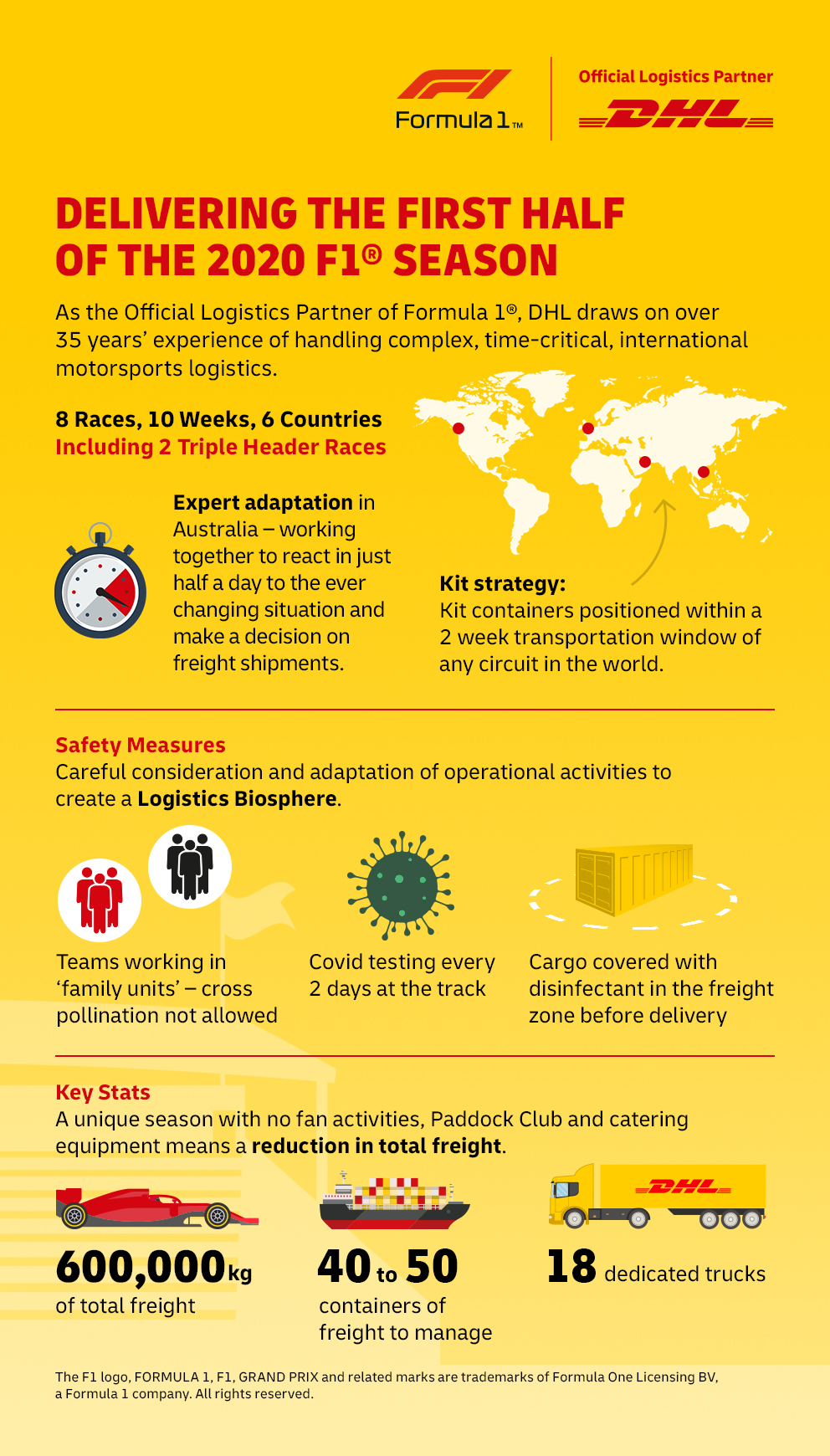 DHL has been active in Formula 1 for over 35 years, and official logistics partner since 2004. The company also presents two coveted awards, the DHL Fastest Lap Award and the DHL Fastest Pit Stop Award, at the end of each championship season. They will continue to be presented as usual during the modified 2020 season. In addition to Formula 1, DHL maintains a number of other partnerships in motorsport, including Formula E, of which the company is a founding partner.

In response to the pandemic, Formula 1 has decided to postpone the introduction of the new rules and aerodynamic development regulations planned for 2021 by one year. This is intended to reduce the cost burden on the teams during this difficult period. The budget cap for teams has also been lowered from the originally agreed US$175 million to US$145 million per year.

During the coronavirus-induced hiatus to real-world racing, Formula 1 also launched a Virtual Grand Prix series to replace postponed races. Fans have been able to tune in to YouTube, Twitch and Facebook to watch virtual versions of the postponed or cancelled races, featuring a number of Formula 1 drivers and special guest celebrities going head-to-head.

MediaReach OMD, a frontline marketing and media agency, had during this period of the coronavirus (COVID-19) pandemic, guided media...
Read more
Business & Economy

A summary of the economic and market happenings within the week and stock recommendation within Afrinvest's coverage. Last week, the domestic equities market closed positive...
Read more
Brand News

Some A-list Musicians and Comedians including Kenny Black, Gbenga Adeyinka, Omobaba, Small Doctor, Humblesmith, as well as some popular Islamic musicians such as Alawiye...
Read more