The just-released foreign trade statistics by the National Bureau of Statistics for Q2:2020 tells how Nigeria’s external sector fared in the wake of the pandemic. 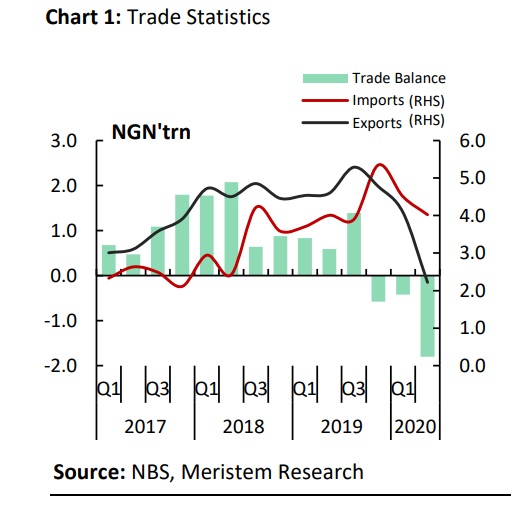 The data reflects the impact of the Coronavirus pandemic on economic activity and global output, which caused a disruption of supply chains and inventory build-up. The suspension of international flights in Q2:2020 and lockdown measures across the globe, threatened to bring world trade to a halt, as commodity prices dropped, and aggregate demand weakened significantly.

Hence, the drop in the country’s export levels was unsurprising given the challenges faced in the global oil market. Crude oil exports, which account for the bulk of total exports, declined materially by 38.49% YoY in H1:2020. Nonetheless, we are encouraged by the improvement in non-oil exports which grew by 15.88% YoY following larger sales of Agricultural (+6.30% YoY) and manufactured goods (+19.60% YoY).

Across most emerging markets, the story is similar as depreciating currencies and a slowdown in global demand impacted their respective external sectors, bringing down the volume of total trades (except for China where a 2.58% QoQ growth in total trades was recorded in Q2:2020). Although unlike Nigeria, emerging economies such as China, Brazil, Indonesia, and South Africa managed to maintain a trade surplus. 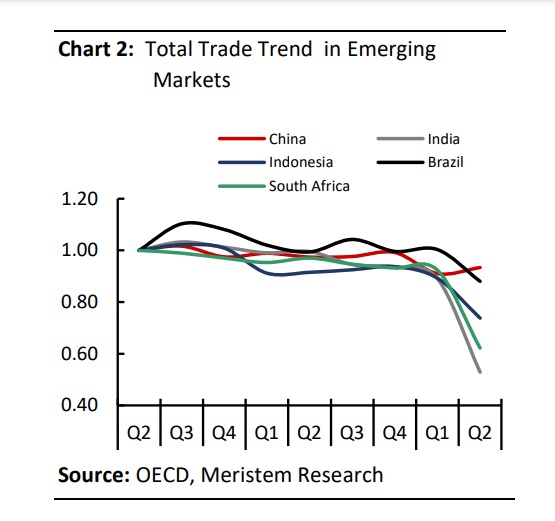 During the period, we observed that import trade patterns were largely unchanged, as China remained the single largest exporter to Nigeria, accounting for 31.41% of total imports. We understand that although China was at the epicentre of the COVID-19 outbreak in the first quarter of the year, largely successful implementation of containment measures during the second quarter supported a rebound in its external sector. Others notable exporters to Nigeria during the period were – the United States (10.66%), India (8.01%), Netherlands (5.04%) and Germany (3.91%). Generally, we see that 62.93% and 45.38% of imported manufactured goods and raw materials respectively, came in from Asia (majorly China and India).

The largest manufactured goods imports from Asia were motorcycles, herbicides and machines for the reception, conversion and transmission or regeneration of voice (IT equipment).

Our local intelligence on the Nigerian economy corroborates the data, as we find that rickshaws and motorcycles have gained prominence in public transportation over the years (especially in Lagos) thus, necessitating the demand volumes for imported motorcycles and rickshaws.

However, a closer look shows that import demand of used vehicles from the United States valued at NGN116.03bn in Q2:2020 topped the list of imported manufactured goods.

On exports, Europe remains the top destination for Nigeria’s exports accounting for 40.86% of total crude oil exports and 33.80% of agricultural exports in Q2. We note also that in Q2, Spain ranked top export destination ahead of Netherlands, China and India.

This is confirmed by a spike in export intensity to Spain (11.41pts) in April (vs Netherlands – 0.56pts, China – 0.33pts, India – 5.09pts and France – 1.50pts) when compared to just 4.99pts and 6.85pts recorded in May and June respectively. For the rest of the year, a lot would depend on how well Nigeria’s trading partners contain the economic effect of the pandemic.

Although we see clearer skies over economic activities in China we still worry over India and much of Europe. The IMF has projected India to contract by 4.50% and Euro area by 10.20% (Spain – 12.8%, Netherlands – 7.70%, Italy – 12.8%). This does not stir optimism for a resurgence in export volumes in the second half of the year.

While we expect the relative stability of oil prices thus far in the second half to provide some support for oil exports and by extension, total exports, the implementation of agreed OPEC oil cuts will limit oil production. Thus, barring any positive surprise, we expect this to keep the trade balance in the deficit till the end of the year.

The onslaught of the Coronavirus had dire consequences for Nigeria’s oil sector in Q2:2020. The drop in oil exports and oil prices not only impacted government revenue and FX earnings but also worsened the staggering trade balance.

However, with economies opening up, we peek into what the future holds for Nigeria’s crude oil exports. We note that while India took over the US as Nigeria’s largest oil export destination, earnings (in terms of oil receipt) from the world’s second-most populous country dropped in Q2:2020 due to refinery maintenance and the COVID-19 induced drop in demand.

In the short term, expectations are that improving crude oil demand and the recovery of crude oil prices from lows experienced in April and May would support crude oil exports value for the remaining part of the year. In the medium to long term, we expect Nigeria to remain competitive in the crude oil market, but we also see the need to unlock new barrels to stay relevant as competition eyes European markets

In an effort to reposition the current account balance and encourage domestic production of agricultural produce, the CBN has been resolute in its stance to restrict access to FX for the importation of food items (recently, Milk and Maize). We noted the gradual improvement in the Agricultural trade balance in the third and fourth quarter of 2019 which was supported by the land border closure.

However, we observed that agricultural imports have again resumed an uptrend in 2020. In H1:2020, agricultural imports jumped by 39.23% to NGN677.00bn (vs NGN486.24bn in H1:2019), reflecting the upswing in imports. Data shows that import demand of Agricultural produce was heaviest on Durum wheat (NGN133.18bn) in Q2:2020 – a key input in the manufacturing of pasta and other food items.

Although Nigeria typically consumes a wide range of wheat-based foods, we observe that since the land border closure in 2019, local consumers have gravitated towards the consumption of pasta as a near substitute for rice.

While we credit in part the rise in agriculture imports to a more local need for Durum wheat, we also attribute the rise to inelastic demand for imported items amid the FX devaluation in Q2:2020, given that the country has not attained self-sufficiency in wheat production.

On the exports side, although food exports were restricted during the crisis phase of the pandemic, we attribute the slide to weaker demand from trade partners (especially for Sesamum seed and fermented Cocoa bean).

The Nigerian Government generated the sum of N651.77 billion from Value Added Tax (VAT) in the first six months of 2020. The National Bureau of...
Read more