Enabled by the partnership with Audi: FC Bayern Munich is the first international football club to drive using electric power. The stars of the Champions League winner received their Audi e-tron models in Munich today and are immediately ready to go: Audi has already installed the charging points for the electric fleet at Bayern’s training grounds on Säbener Strasse.

In January, FC Bayern Munich and Audi had extended their partnership until 2029 even before the previous agreement expired. Among other things, the agenda includes strategic collaboration in innovative marketing concepts and electrification.

An important milestone has now been marked: The handover of a total of 19 Audi e-tron cars to the players means that more than half of FC Bayern’s Audi fleet is electrified. As a result, the club reduces its fleet consumption to less than 95 grams of CO2/km and thus makes an important contribution to sustainability. 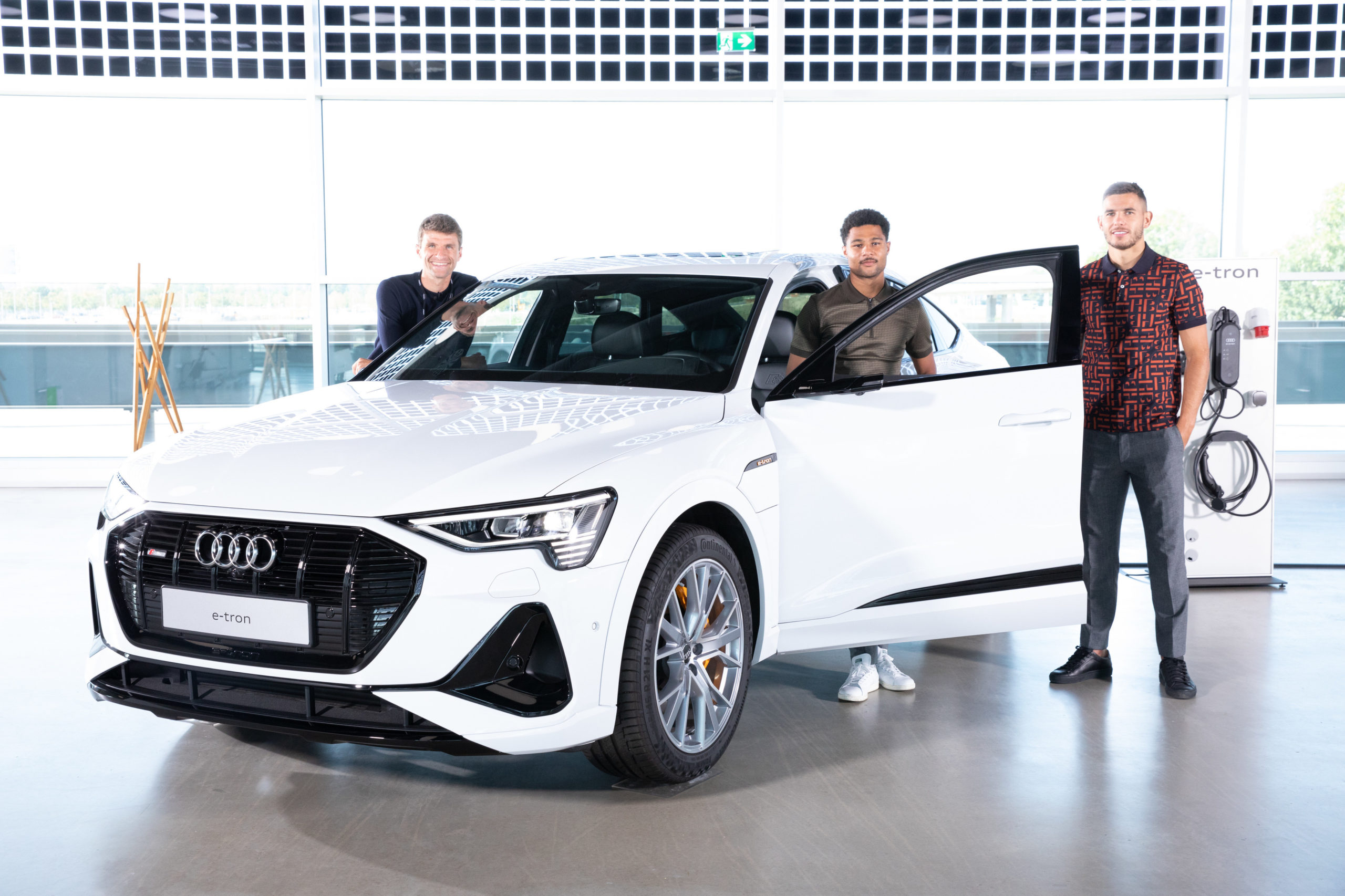 “For us, sustainable premium mobility is the focus of Audi’s strategic alignment. Together with FC Bayern, we live ‘Vorsprung’ and by delivering 19 Audi e-tron cars we are sending a message in line with our path toward an electric future,” says Hildegard Wortmann, Member of the Board of Management for Sales and Marketing of AUDI AG. She handed over the new company cars together with her fellow management board member Sabine Maaßen, who is responsible for Human Resources and Organization.

Due to corona, the vehicle handover in 2020 did not take place at the Audi Piazza in Ingolstadt. In recent years, this event always marked a highlight especially for the children of the Audi workforce since the little ones are often the biggest fans. HR Management Board Member Maaßen: “I’m happy that at least a small delegation of our apprentices was able to attend this year’s vehicle handover to FC Bayern, because strong brands thrive on passion and thrill – and, ultimately, only people turn brands into strong brands.”

Head Coach Hansi Flick and Bayern’s stars around team captain Manuel Neuer and top scorer Robert Lewandowski received their cars at the Audi training complex at the Munich airport. Immediately following a brief orientation about the digital functional features of the e-tron, the Champions League winners took part in an Audi driving experience in their new models. “During my time with FC Bayern I’ve also been able to experience the impressive technical development of our partner Audi,” says Manuel Neuer. “My first Audi ten years ago was a Q7 TDI, now I’m driving an electric car – that’s the future.”

“It’s great that FC Bayern, together with Audi, is now the first international club on the road with electric power,” says Karl-Heinz Rummenigge, Chairman of the Executive Board of FC Bayern München AG, “The electrification of our fleet with the Audi e-tron and the provision of charging points to our training grounds are good examples showing that the partnership between Audi and FC Bayern goes far beyond normal sports sponsoring.”

Audi has been partnering with the most successful German football club since 2002, plus the brand with the four rings has been a shareholder of FC Bayern München AG since 2011. After winning the German Championship, the DFB Cup and the Champions League, FC Bayern kicked off the new season in a meeting with FC Schalke 04 on Friday night.

Over 500,000 cars delivered between October and December A total of 1.69 million delivered worldwide in a challenging year New best figures in...
Read more

The sporty SUV in the compact segment now has an even fresher look: Audi has revised the SQ2. Thanks in part to the new...
Read more

Sporty, powerful and efficient: Audi presents the new generation of the SQ5 TDI