Risk-off sentiments, triggered by COVID-19, pummelled several emerging and frontier currencies in the first half of the year. Petro-currencies, such as the Nigerian Naira and the Angola Kwanza, had to endure even more pain as both currencies have weakened by 6.2% and 30.1% YTD respectively.

The pandemic stifled the supply of foreign exchange (FX) due to the sharp decline in commodity prices, tourism receipts and remittances. As a result, pent-up demand emerged for haven assets such as gold, providing support for the Ghanaian Cedi. Ghana has experienced relative currency stability as the surge in gold exports – coupled with a lower oil import bill – sustained dollar liquidity in the economy.

In contrast, Nigeria witnessed a significant outflow of portfolio investment that resulted in a double devaluation of the Naira as oil prices — the main source of FX to the economy – fell due to the twin impact of slow demand and OPEC+ overproduction.

While SSA currencies have been pressured YTD, the Ghanaian cedi has been the most resilient among our coverage countries. The Ghanaian Cedi’s resilience has been supported by the ample supply of foreign exchange, on the back of higher gold & cocoa prices YTD.

The price of gold has surged by 25.9% YTD, due to its safe-haven status and low yields in advanced economies. Also, the price of cocoa — another major Ghanaian export — recovered in Q3’20, supported by the recent dollar weakness (since most commodities are priced in dollars), and investors’ looking to commodities as returns dry up elsewhere.

The twin recovery in the prices of key Ghanaian commodity exports improved Ghana’s terms of trade, amid the plunge in oil prices and the resulting dollar inflows limited the depreciation of the Cedi to 1.6% YTD.

In contrast to the Cedi, the peg of the Nigerian Naira has been adjusted twice this year, resulting in a c.23% downward adjustment in the official value of the Naira. The official Naira exchange rate was adjusted by 18% to f4360 in March while another 5% adjustment to f4379 was delivered in July.

At the parallel market, however, the Naira continues to trade at a premium to the official rate despite the resumption of FX sales to Bureau de Change (BDC) operators in September. With NAFEX rate and the parallel market rate at f4385.8/$ and f4455/$ respectively, the official Naira exchange rate currently overvalued by 1.79% and 20.0% respectively.

Forward markets enable us to gauge investors’ perception of what currency could be worth in the nearest or distant future. The gap between the spot and 12-month forward rate in Nigeria’s Investors & Exporters (I&E) Window expanded rapidly within the first four months of the year due to heightened

uncertainties and capital outflows from both fixed income and equities markets. The gap between the NAFEX spot and 12-month forward rate began to narrow in April, coinciding with the period where $3.4bn was released by the IMF as a Balance of Payment support fund. This narrowed the gap from as high as f474 in March to f412 in September 2020. In Ghana, forward rates are within the Bank’s range due to closer tenured contracts within the range of 7 to 75 days.

Although it shelved plans to issue a Eurobond this year, Nigeria’s reserves were spared the consistent depletion by a prompt devaluation and the inflow of

$3.4bn under the IMF Rapid Finance Initiative (RFI) program. This gave the

CBN room to defend the Naira for a while before another round of devaluation in July. Ghana, on the other hand, issued a 40-year $3bn Eurobond in February. This happens to be the longest-tenured Eurobond issued by a sub- Saharan African country.

Coupled with a $1bn inflow under the IMF’s RFI program and a $100mn World Bank support, Ghana’s international reserves have remained slightly above its 2019 year-end figure. The war-chest of dollars at the Bank of Ghana (BoG) has informed its frequent intervention in the Ghanaian forex market, causing the Cedi to trade within a relatively tight range of GH¢5.7 – GH¢5.9/$ within the past 5 months, compared to large swings in the currency that had persisted over the past years.

The Cedi, which had weakened against the dollar for at least 24 years, was literally the world’s best-performing currency in February as investors anticipated its Eurobond issuance.

In Nigeria, reserves have fallen by 7.45% YTD to $35.7bn due to the exit of foreign portfolio investments. Due to lower imports and the BoP support from the IMF, Nigeria’s import cover (8.9 months) remains slightly above regional (6 months) and global (3 months) benchmarks. At the end of August, Ghanaian reserves had risen by 1.7% YTD to $8.56bn, translating to an import cover of 4 months.

According to broad-money ratio indices, external reserves cover 46% and 63% of Nigeria’s and Ghana’s money supply. This is above the global benchmark of 20%, which indicates the likely impact of a capital flow reversal or hike in domestic demand for foreign assets on the money supply of the country.

Despite reaching a six-month high in August, rising number of coronavirus cases has left oil prices stuck within the range of $39 – $45 within the past four months. Path of absolute recovery is still bleak, as the world awaits the arrival of a vaccine to assuage fears and possibly restore demand. With additional supply expected from Libya, oil prices may not break the $45 ceiling in Q4’20. The Central Bank of Nigeria has taken measures to stem the tide of reserves depletion by plugging leakages in the foreign exchange web.

Attempts at unifying the Naira towards the I & E Window rates informed the order to BDCs to sell dollars at f’t386/$. Notwithstanding, the dollar still trades at a 20% premium to the naira in the parallel market. The addition of milk and maize to the forex restriction list adds to the demand pressures in the parallel market, which will eventually be funded from the same FX reserves. Although the liquidity management of the Central Bank has halted a free fall in the reserves, further exclusion of items from the official list would transfer such demands from the official window to the parallel market.

More so, a recent directive of the Federal Government to halt food imports from accessing foreign exchange could add to existing pressures in the parallel market. As it stands, the increased FX Supply upon resumption of FX sales to Bureau De Change Operators has been nullified by a build-up in FX demand at the parallel market. Thus, the gap between the official and parallel market FX rates could widen further.

Upcoming elections in Ghana may induce sell pressures on the Cedi. In 2016, the Cedi is reported to have lost about 11% prior to the elections. Notwithstanding, the Cedi may continue to hover within the current exchange rate range as the Bank of Ghana sustains its interventions in the forex market.

to wade off speculation and currency instability. Supported by high gold prices, the Cedi is not likely to go out of the target range, as elections draw near.

All eyes on the CBN’s FX unification efforts

We believe the eyes of both domestic and foreign investors will remain on the forex unification efforts of the Central Bank of Nigeria. As highlighted in the short-term Economic Sustainability Plan, we expect further moves by the CBN to reduce arbitrage opportunities in the foreign exchange market. We also look forward to new foreign exchange policies aimed at stalling the slide in reserves and provide support for the Naira peg, barring the possibility of another slump in oil prices amid a budding coronavirus second wave.

We believe the expected inflow of $200m guarantee from the P&ID suit will provide some support to the Naira. However, further delay in other concessional flows may limit the Bank’s ability to respond to new layers of pressure. Express clarity on FX unification efforts could induce portfolio inflows given the relatively low Price-to-Earnings ratios in the equities market, although the low yield environment in the fixed income market remains a deterrent.

In our base-case scenario, we expect the Naira to close the year at f4379/$ and f4483/$ in the official window and parallel markets respectively. Our expectation is anchored on a moderate recovery in oil sales, an average oil price of $42/barrel, an inflow of $1.5biIIion in concessionary loans and the absence of the second wave of the COVID-19 pandemic.

A second wave of the virus could accelerate portfolio outflows and incite another round of devaluation to f4400 in the official market, which could springboard into further depreciation of the Naira to f4395/$ and f4499 at the I&E Window and parallel markets respectively. 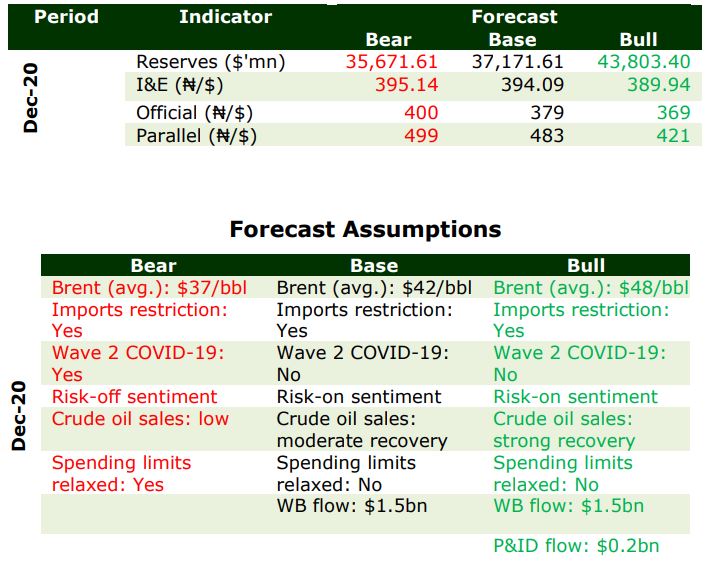 Ghanaian Cedi to remain within range

As Ghana’s December elections draw near, the Cedi is expected to remain stable on the back of a diversified export base, which could better sustain FX inflows and improve the BoG’s ability to continue intervening in the foreign exchange market. We expect sustained appetite for safe-haven assets for the rest of the year as health risks persist.

Consequently, we expect bullish sentiments to remain in gold and other precious metals. In addition, the planned listing of a $500mn gold royalty fund in London slated for October will support government finances and build up external reserves. We believe these factors will strengthen the Bank of Ghana’s firepower in defending the Cedi within the target range.

FX restriction to Food and Fertilizer: Yea or Nay?

Recently, President Buhari directed the CBN to restrict FX sales for food items and fertilizer importation citing that the Federal Government, through its proactive...
Read more

The CBN’s move against abuse of FX: Our thoughts

The Central Bank of Nigeria (CBN) recently directed Authorized Dealers to only open Forms M (a mandatory statutory document to be completed by all...
Read more

Inflation Rate in H2-2020: Strongly biased towards an upward trend

In our F Y-2020 outlook report, we highlighted 6 upside risks to consumer prices in 2020 and expected an increase in inflation. Those factors...
Read more

FGN Bonds The FGN bonds space continued its tales of halves, bullish at the head while the belly and the tail remained bearish. We saw...
Read more
- Advertisement -