According to the research data analyzed and published by ComprarAcciones.com, life and health insurance is the biggest industry globally by revenue in 2020. The industry’s revenue for the year is expected to surpass $4.384 trillion. It has been growing at an average rate of 2.4% over the period between 2015 and 2020. Interestingly, direct general insurance comes in seventh on the list, with $2.535 trillion in revenue for 2020.

Comparatively, the insurance industry as a whole was in the sixth position in 2019 according to Global Data.  It had a total of $2.611 trillion in revenue during that year and made $148 billion in profit.

In the US, health and medical is the third largest sector by revenue in 2020, worth $1.057 trillion. On the other hand, life insurance and annuities is in the eighth spot with $723.3 billion in revenue. Commercial banking is on the 10th spot, estimated to be worth $681.6 billion in revenue.

The 10 Global Biggest Industries by Revenue

Top 10 Biggest Industries by Revenue in the US

However, due to the global slowdown in economic activity, premiums income will decline by -3.8% worldwide according to an Allianz Global Insurance report. The decline is at least three times worse than it was after the 2008 financial crisis when premiums only sank by 1%. On the bright side, it is projected that in 2021, growth will return to 2019 levels at 4.4%

Ibis World ranks the oil and gas industry in the third spot in 2020 with an estimated revenue of $3.325 trillion. 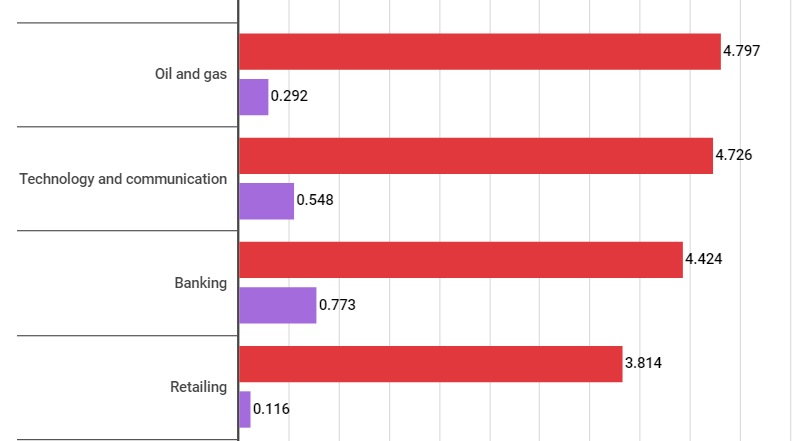 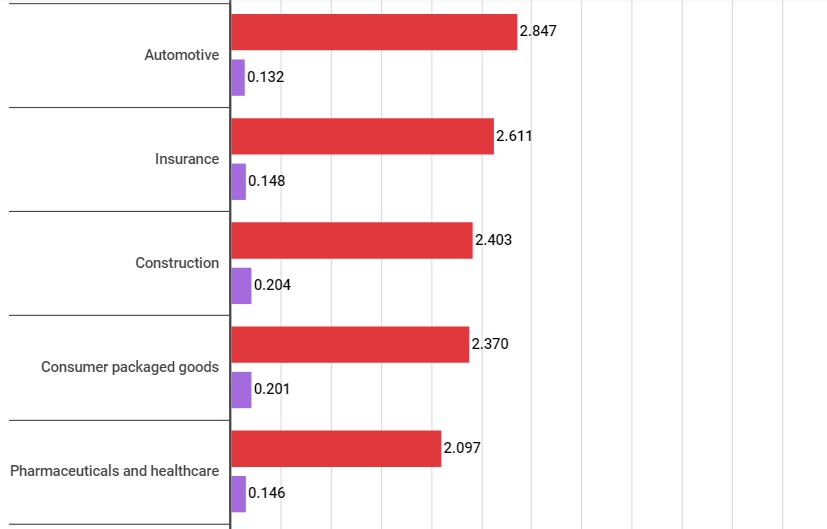 During the year, it was also the highest gainer in terms of profit, growing at a rate of 36.3% year-on-year (YoY). Technology and communication was the second biggest gainer, growing at almost half the rate of oil and gas, at 19.8%.

Metals and mining profits grew at 13.6%, placing the sector in third place, while the banking sector was fourth with a 12.6% growth rate.

As a result of the global pandemic, the situation for these sectors has been reversed in 2020. The oil and gas is once again at the forefront, but this time, with massive losses. During the first half of 2020, the top 12 publicly traded oil companies globally posted a cumulative net loss of $80 billion.

The reason behind the steep decline was an unprecedented decline in oil consumption during the period. This significantly weakened demand and in April at the peak of the pandemic and pushed prices to the lowest level since 1999.

Notably though, oil and gas extraction is still highly profitable. According to a Forbes report, it is ranked third on the list of the most profitable industries. It sits behind accounting in the first place and legal services in the second.

Banking was the third largest industry by revenue in 2019 with $4.424 trillion in revenue and $773 billion in profits. In 2020, it has been relegated to the eighth spot and is expected to generate $2.341 trillion as revenue.

The situation in China, where the pandemic started, places the state of the banking industry in perspective. During the first half of 2020, the top five Chinese banks posted YoY profit declines of at least 10% according to a CNBC report.

Collectively, the five megabanks posted a drop of $9.9 billion YoY in H1 2020 profits. Notably, four among the five banks are listed among the top 10 largest banks globally.

In the US, the top 6 banks put aside $35 billion in loan loss provisions during Q2 2020, highlighting the uncertainty surrounding the market. The figure had risen from about $25 billion in Q1 2020.