The coronavirus outbreak caused the worst smartphone market contraction in history, as global demand plummeted in the first and second quarter of the year. Although the last few months witnessed a recovery in the number of smartphone shipments, the entire industry is expected to witness substantial revenue losses this year.

According to data presented by Stock Apps, the global mobile phone industry is forecast to lose $51.1bn in revenue by the end of 2020, a 10% drop year-over-year.

The revenues of the global mobile phone industry have been constantly rising over the last years. In 2016, the entire industry generated $435.7bn in revenue, revealed Statista data. Over the next twelve months, this figure rose to $462.6bn. By the end of 2019, global smartphone sales revenue surged to $506.2bn, a 16% jump in three years.

However, as half of the world entered a lockdown, demand for new devices has been crushed in the first months of 2020. The IDC’s Worldwide Quarterly Mobile Phone Tracker data showed smartphone vendors shipped 275.8 million units worldwide between January and March, a 25% plunge compared to December 2019 figures and an 11% drop year-over-year. 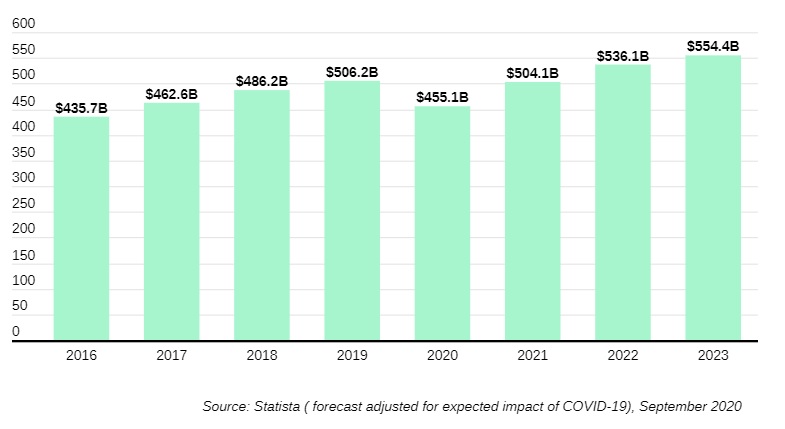 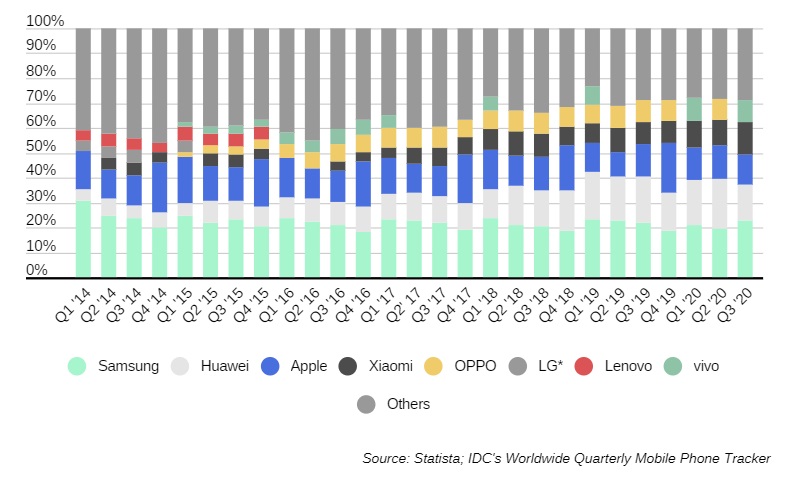 The strong downsizing trend continued in the second quarter of the year, with millions of consumers cutting down their budgets and prioritizing spending amid the COVID-19 crisis.

From the consumer standpoint, unless replacing a broken phone, smartphones are mostly a discretionary purchase, which became unnecessary in times of economic uncertainty. With global demand plummeted, smartphone shipments dropped 16% year-over-year to 278.4 million units between April and June.

Statistics indicate smartphone shipments showed positive movement in the third quarter of the year, with vendors shipping 353.6 million handsets. Still, 4.7 million less compared to the same period a year ago.

Although the industry shows a recovery from the initial impact of the coronavirus, the positive Q3 figures won’t be enough to close the gap noted in the first half of the year.

Statista data indicate the global mobile phone industry revenue is expected to drop to $455.1bn this year, under 2017 levels. However, the following years are set to witness a positive trend, with revenues rising by 21% and reaching $554.4bn by 2023.

With almost 1.8bn cellular subscriptions and $117.8bn in revenue in 2020, China represents the world’s largest mobile phone industry. However, the Chinese market has also been affected by the coronavirus outbreak, with revenues decreasing by 5.4% year-over-year.

Analyzed by vendors, Samsung represents the market’s largest player with almost 23% market share in the third quarter of the year. Huawei ranked second with a 15% market share between July and September. Xiaomi follows with a 13.1% share.

The IDC data revealed Apple market share dropped significantly this year, falling from over 20% in the fourth quarter of 2019 to 11.7% in September.

Read Also:  Samsung and Apple No Longer Make Up 50% of the World’s Active Smartphones as Chinese Brands Grow

Smartphones Critical to the Daily Lives of People Who Are Blind or Visually Impaired, Finds Strategy Analytics

Smartphone technology has become an unexpectedly vital piece of technology for the sight loss community to not only maintain independence at home and in...
Read more

New BlackBerry 5G smartphone will be publicly available in the first half of 2021 OnwardMobility's CEO Peter Franklin announces agreements with BlackBerry and FIH Mobile...
Read more

OnePlus has announced two new smartphones, the OnePlus 8 and OnePlus 8 Pro. Diverging from its usual launch plan of a 'flagship killer' in...
Read more

Can Smartphones rival Human Eyes in the Era of High Definition?