The US 10-Year Bond and Nigeria

The US 10-year government bond yield is unsettling global markets. The yield on this normally obscure instrument rose from 0.72% per annum six months ago to 1.57% at the end of last week.

This may not appear to be a profound change, but it is having effects -sometimes dramatic – on markets around the world. The market in Eurobonds issued by the Federal Government of Nigeria (FGN) is no exception.

For over a decade, investors in risky assets have enjoyed the benefits of low US, Yen and Euro interest rates, not only in terms of lowering their cost of funds (if they borrow) but in terms of the implied valuations of equities.

In developed countries, policymakers have treated inflation as being too low, rather than too high. And yet US President Joe Biden’s introduction of a US$1.9 trillion (N779.0tn) stimulus package has, finally, awakened fears that renewed economic growth will increase inflation. Hence the rise in US bond yields. 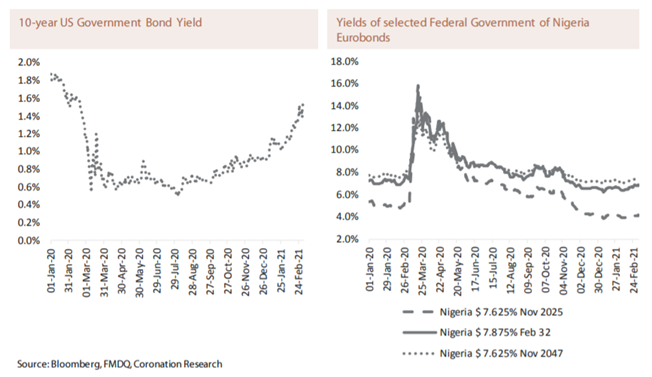 Global equity markets are jittery. For example, the Nasdaq index of technology stocks fell by 6.9% in the second half of February and has fallen a further 1.5% so far in March.

These are not large falls in the context of the huge rally in this market over the past five years (the Nasdaq rose 178.7% over this period), but they are corrections, nevertheless. There has also been price falls in FGN-issued Eurobonds. The yield of the FGN 2032 Eurobond has risen from 6.44% to 6.86% over the past three weeks.

The narrative behind emerging market Eurobonds, until recently, has been one of rising prices and yield compression. The argument was that, with low-interest rates in the US, there were so many US dollars looking for yield that investors would have to buy assets like Nigerian Eurobonds.

Indeed, it was frustrating for Eurobond analysts that, whatever the fundamental features of Nigeria and of similar countries, yields just kept on coming down. The exception to this, of course, was the panic-induced sell-off of almost exactly a year ago (see chart, above) when yields shot up during the first wave of the Covid-19 pandemic. But wise investors knew not to sell at this time.

The situation is different now. If US bond yields are rising then the difference between US dollar yields and FGN Eurobond yields is getting less, which weakens the justification for buying and holding them. Another effect has been the reduction in the spread, which has narrowed over the past few years, between FGN Eurobond yields and the corresponding (in terms of duration) US government dollar bond yield, the so-called Z-spread.

In fact, it is possible to look at these two factors separately. In the chart below we present the Z-spreads over the past two years for selected FGN Eurobonds. In the table, we present the average Z-spread during the year leading up to the crisis (we identify the start of the crisis on 4 March 2020) and present this as a target Z-spread for each bond.

Then we present the Z-spread at the end of last week. The difference between the two shows the potential for the current Zspread to revert to its average, in terms of additional yield expressed in basis points. 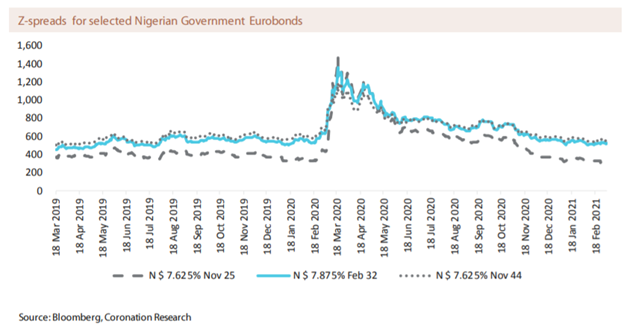 What this shows is that for one of our three selected bonds, the FGN November 2025, the Z-spread has tightened a lot (63 basis points) over its average, suggesting some potential yield rises if the Z-spread reverts to its average.

But, for the other two bonds, the FGN February 2032 and the FGN November 2047, the Z-spread compression is less of a problem. In other words, investors should worry less about the tightening of the spread of FGN Eurobonds over US government bonds and worry more about the direction of US bond rates themselves.

The final column in the table presents Bloomberg’s assessment of the potential mark-to-market change in the value of each bond for a one percentage point change (1pp, or 100bps) change in its yield to maturity. As one would expect, the longer the duration, the more potential for change.

If US government bond rates continue to rise it may not want to issue in 2021, either. This could result in the FGN not issuing Eurobonds for three straight years 2019-21. This would be exceptional and, ultimately, could make Nigerian Eurobonds scarce in the market.

Last week, the Debt Management Office (DMO) on behalf of the Federal Government of Nigeria (FGN) published the Bond offer circular for Oct-2020. To...
Read more