The National Bureau of Statistics (NBS) has released the February 2020 inflation figures.

According to the report, inflation rose for the 18th consecutive month in February 2021 and the highest in four years. Notably, headline inflation edged higher to 17.33% compared to the 16.47% recorded in January which is 0.10% higher than our estimate of 17.23%. 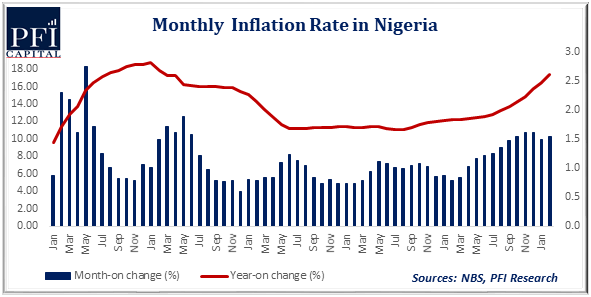 One notable factor remains the sustained shortfall in domestic food supply relative to the demand signifying cost-push inflation rather than demand-pull inflation. Specifically, issues of insecurity and supply chain bottlenecks across the country have greatly impacted the prices of food items negatively. 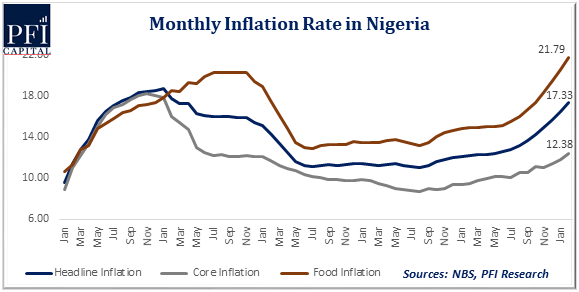 Impact on the Capital Market…NSE ASI down by 6.16% in February

The equities market witnessed significant selloffs across most tickers as the ASI retracted from the late 2020 and January rally. As at the last trading day in January, the market had already gained 5.32% for the year in addition to the record 50.03% gains in 2020.

However, the weekly bearish sentiments started from the first week of February with the market plunging by 1.66% that week. This was followed by three consecutive declines of 3.04%, 0.63% and 0.96% for the remaining weeks in February.

In summary, the market lost about 6.1% in the month of February alone, attributable to the continuous spike in fixed income yields in a bid to curtail rising inflation and also attract foreign investors. 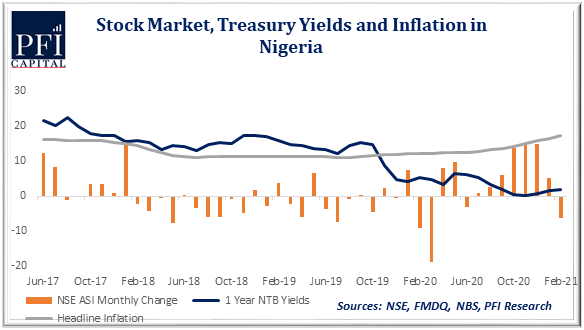 Unemployment Not Slowing Down 23.18mn Nigerians Reported Being Jobless

While there is no direct solution for stagflation, policies targeted at improving productivity such as enabling business environment (security and infrastructure) has to be increased to the point where it would lead to higher growth without additional inflation. 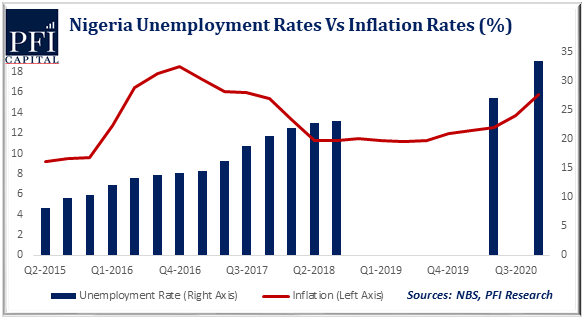 Our Inflation Outlook For The Month Of March

For the month of March, we maintain an upside bias for the headline inflation considering the price impact of the recent spike in PMS pump price that was later reverted. Secondly, food inflation is still being pressured on the back of continued insecurity inhibiting sufficient food production by farmers across the country. Other issues such as logistics constraints, exchange rate instability and high levels of system liquidity are also expected to push prices upward.