Sustained Growth In The Equity Market, Market Up By 0.71%

Sustained Growth in the Equity Market, Market Up By 0.71%

The Banking sector saw the most growth, advancing by 2.06% following price gains in JAIZBANK (8.47%) and GUARANTY (4.28%). The Insurance sector grew by 0.56%, while the Consumer Goods and Industrial sectors gained 0.19% and 0.07% respectively. The Oil and Gas sector was the only one to record a negative performance, dropping 0.50% following a loss in OANDO.

With 28 stocks advancing and 12 stocks declining today, the market breadth moved upwards from 1.54x to 2.33x. The volume and the value of trades in the market increased significantly, compared to the most recent trading session; the volume grew by 108.10%, while the value grew by 281.75%, as investors traded a total of 522.17 million units of shares worth ₦10.65bn in 4,566 deals. 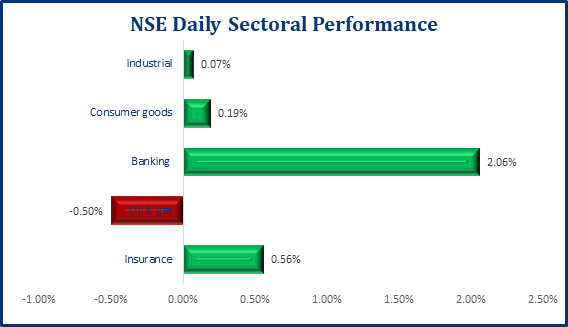 Transactions on the Nigerian Equity Market closed w/w on a negative note despite the market recorded gains in three out of the four trading...
Read more

Welcome to the month of April, the fourth month of the year 2021. A happy new month to you, your friends, and your family...
Read more

At the recent MPC meeting, the majority of members voted to maintain the status quo on all monetary policy tools, retaining the MPR at...
Read more
- Advertisement -