SEC Approves Appointment of CEOs of Demutualised Entities of The NSE

The National Council of the Nigerian Stock Exchange is pleased to announce that the appointments of the following Chief Executives to head its non-operating Holding Company and operating subsidiaries have been approved by the Securities Exchange Commission, Nigeria.

Commenting on the appointments:

“The confirmation of these appointments are an important step in the process of building a leading and resilient African Exchange Group following the completion of our demutualisation programme. 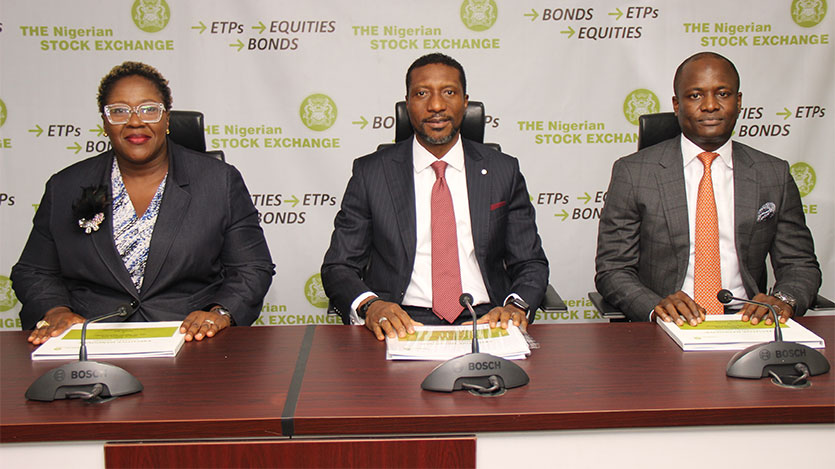 I am delighted to continue working with Oscar N. Onyema, OON who has played a significant role in the reshaping of the Exchange. As a proven business leader and strategic thinker, I am confident that he will elevate the Nigerian Exchange Group (NGX Group) and its subsidiaries successfully into a new era of development.”

Otunba Ogunbanjo also recorded his thanks to the retiring Ex-Officio Member of the Council:

“I would like to warmly thank Mr. Aigboje Aig-Imokhuede, CON who retires as Ex-Officio of the National Council following the demutualisation of the Exchange. He not only provided wise and valuable counsel to the NSE over the years in its quest towards its demutualisation, he contributed significantly to the transformational achievements recorded by the Exchange during his tenure as President. I speak on behalf of the Council and Management of the NSE in commending him for his exceptional service and wishing him well in his future endeavours. Equally, I thank all past leaders of the Exchange many of whom started this journey and are alive to witness this epochal transition.”

“The confirmation of the appointment of Temi Popoola, CFA as the first Chief Executive Officer of Nigerian Exchange Limited comes at a pivotal moment for Nigerian capital markets as the Exchange enters a new phase of its history as a demutualised company, bringing to the Exchange his track record of achievement local and global capital markets.

He will focus on ensuring the Exchange delivers an even higher level of service for all its participants and stakeholders, including investors, listed companies and brokers. I look forward to working with him and his team in the new dispensation  as we move forward on implementing the Group’s growth  strategy.”

“The clear separation of the regulatory and business functions is an essential part of the Group’s operations following demutualisation and the Board was determined to ensure the selection of an experienced regulator for this task.

I believe all the Exchange’s stakeholders will welcome the announcement of Tinuade Awe as the first Chief Executive Officer of NGX Regulation, given her prodigious experience and track record in capital markets regulation. Our stakeholders can continue to look forward to a robust and transparent regulatory regime under her leadership.”

Mr. Oscar N. Onyema, OON is the Group Chief Executive Officer, Nigerian Exchange Group (NGX GROUP). Prior to this, he served as the CEO and member of the National Council of The Exchange from 2011 – 2021. In this role, he was responsible for supervising the general working of The Exchange.

He serves as the Chairman, Central Securities Clearing System Plc (CSCS), the clearing, settlement and depository for the Nigerian capital markets; and Chairman, NG Clearing, which is in the process of developing a Central Counterparty Clearing House (CCP).

In addition, Mr. Onyema is a Board member of the National Pension Commission of Nigeria (PENCOM) and sits on several advisory boards including the London Stock Exchange Group (LSEG) Africa Advisory Group (LAAG).

Prior to relocating to Nigeria, he served as Senior Vice President and Chief Administrative Officer at American Stock Exchange (Amex). He also ran the NYSE Amex equity business following the merger of NYSE Euronext and Amex in 2008.

His remarkable achievements have earned him awards such as the Special Recognition Award for transformational leadership in the Nigerian Capital Markets at Business Day Top 25 CEOs Award 2018. In 2015 Forbes Magazine named him among the Top 10 Most Powerful Men in Africa. In the preceding year, he received the national honour of Officer of the Order of the Niger (“OON”) from the Federal Government of Nigeria.

Mr. Onyema is an alumnus of Harvard Business School, The Wharton School, University of Pennsylvania and INSEAD International Directors Programme. He got his MBA from Baruch College, New York; and BSc degree from Obafemi Awolowo University, Ile-Ife. He is a Fellow of the Institute of Directors (“IoD”) Nigeria, Fellow of the Chartered Institute of Stockbrokers (CIS), Associate of the Chartered Institute for Securities & Investment (CISI) in the UK, and holds FINRA Series 7, 24, 63 qualifications in the United States.

A Wall street trained investment banker, Mr. Popoola joins NGX Ltd. from Renaissance Capital (Rencap) where he was Managing Director and CEO for West Africa. He supported the continuous growth, profitability and success of the organisation by providing strategic market insight and leadership.

He led the transformation of Rencap in West Africa by diversifying the company’s revenue streams into fixed income, derivatives, structured products, debt financing and wealth management. In addition to influencing change across the organisation, he was responsible for overseeing a global workforce, expanding foreign investor capital opportunities into West Africa and introducing enduring business processes and strategic initiatives.

Since his return to Nigeria in 2009, Mr. Popoola has also worked with the United Bank of Africa (UBA) as Head of Structured Products for Global markets and with CSL Stockbrokers Ltd. as Head of Sales and Trading. In both of these positions, he guided growth and advancement for investors across global markets, including South Africa, the UK, the Middle east and the US.

Mr. Popoola began his career in London as a portfolio manager focused on African energy markets and worked for several years as a senior equity derivatives trader with Bank of America Securities in New York where he drove firm profitability by providing derivative solutions to US corporations and family offices.

He graduated with a First-Class degree in Chemical Engineering from the University of Lagos and holds a Masters degree from the Massachusetts Institute of Technology (MIT). He is a Chartered financial analyst (CFA) and a Chartered stockbroker (CIS). He holds Series 7 and 63 licensures.

Ms. Tinuade Awe is the Chief Executive Officer, NGX Regulation (NGX REGCO) Ltd. Prior to attaining this position, she was an Executive Director, Regulation at The Exchange. She also served as the General Counsel and Head of the Legal and Regulation Division as well as Council Secretary before becoming an Executive Director.  Prior to The Exchange, Ms. Awe worked with the United Nations in The Hague and Geneva as well as the New York offices of the global law firm, Simpson Thacher & Barlett and Banwo & Ighodalo in Lagos, Nigeria.

As Executive Director, Regulation, she had responsibility for the regulation of the two primary stakeholder groups of The Exchange, i.e., the Dealing Members that trade on The Exchange and issuers that have securities listed on The Exchange.  Her team was responsible for rulemaking and interpretation, monitoring, inspections, market surveillance, investigations, regulatory technology, and enforcement.

She is a non-executive director of the Central Securities Clearing System Plc (CSCS).  She is also a member of the Board of the Financial Reporting Council of Nigeria (FRC). She Chairs the FRC’s Board Corporate Governance Committee, which has Board-level responsibility to monitor the implementation of the National Code of Corporate Governance (NCCG).

Ms. Awe has an LL.B Degree from the Obafemi Awolowo University, graduating as the Best Female Student in the Faculty of Law. She finished at the Nigerian Law School with First Class Honours, graduating as Best Overall Student. She also holds LL.M Degrees from Harvard Law School, where she was a Landon H. Gammon Fellow, as well as The London School of Economics and Political Science (LSE), where she graduated with Merit. At the LSE, she was a British Council Scholar. She is admitted to both the Nigerian and New York Bars.

The attention of the Securities and Exchange Commission (SEC) has been drawn to the existence of several providers of online investment and trading platforms...
Read more

Cititrust Financial Services Plc, a leading pan-African investment group with 10 subsidiaries is planning to list by way of introduction to the Nigeria Stock Exchange...
Read more

The nation’s bourse opened the month of April with a loss of N67 billion, amid profit-taking. Specifically, the market capitalization which opened for the month...
Read more
- Advertisement -