From chorales, fairs to music concerts, the joyful bells of Christmas can be heard from any part of the country. Lagos, being a commercial and tourist attraction has become a home to many of the landmark events.

The Yuletide is always a busy one in the mega city. Brand Spur Nigeria brings you some of the highly anticipated events from headline concerts by some of your favorites Davido, Olamide, Burna Boy, Wizkid, to street gigs, there’s never a dull moment in Lagos at Christmas.

Here are some events you don’t wanna miss out on this December. If you are in Lagos Nigeria, here is what your detty December calendar should look like:

In 2008, the Publisher of Ovation International Magazine, Chief Dele Momodu ushered in a new way of celebrating Christmas. He launched The Red Carol now Ovation Christmas Carol and Awards which is held every December. It has become one of the most popular annual Christmas events that comprises of musical performances, drama, fashion shows and award presentations for varying charitable causes.

Momodu has continued to uphold this tradition and never missed a year except in 2010 because of the impending elections. In 2013, Momodu took the event to Ghana, a country which he has very strong ties. The event was graced by former president of Ghana J. J. Rawlings with Wyclef Jean as the headline act with many other international and Nigerian performers. For the first time since the history of the show, Momodu held two shows in different locations (Lagos and Accra) in 2015. The events were both headlined by Wizkid. It held its ninth edition recently which was attended by the president of Ghana John Mahama. At the event, King Sunny Ade, Mike Adenuga were inducted into the Ovation Hall of Fame while the Family of OJB

Jezreel and Cymbals Dance Crew were honoured with cash awards. A Ghanaian, Mr. Richard McCarthy was also rewarded with a cash sum of N500,000 for taking kids off the streets of Ghana through boxing.

Music performances came from Flavour, King Sunny Ade and American legend Cameo who performed for the first time with his band in Africa.

This event made history in 2014 when it broke the Guinness Book of World Records as the largest gathering of carol singers in the world. About 25,272 carol singers gathered at the Akwa Ibom Stadium, Uyo,

Akwa Ibom State, Nigeria on December 13 and made history with their performances.
The event kicked off in 2012 and has since become a gospel spectacle for holidaying families.

For the first time since its inception, Industry Nite had a Christmas event which it tagged its ‘Grand Finale’. Matthew Ohio, the convener came up with a weekly activity that pools both new and established artistes, music executives and influencers in the entertainment industry every Wednesday night for more than three years. It recently had its first Christmas event which was headlined by Davido and his DMW Crew at the Oriental Hotels, Lagos.

From being a major Sunday morning programme, Cool FM transformed its Praise Jam to a Christmas affair more than a decade ago.

The show holds on Christmas Day and features stellar performances from both local and international acts. Usually hosted by the radio’s OAPs, the event also creates a meet-and-greet for its die-hard fans.

The singer/rapper notorious for his street lingo made a name for himself in 2014 when he kicked off his self-titled concert. He came up with a concept that beautifully combined music performances, theatrics and comedy. Since that first edition, his followership has increased.

The third edition is billed to take place at Eko Convention Centre, Eko Hotels and Suites, Lagos on December 26. A collaborative effort of Achievas Entertainment, YBNL Nation Entertainment and Right Entertainment, OLIC has grown to become one of the anticipated shows of the Christmas period.

Promising surprising thrills for his fans and music lovers, he proclaimed that this year’s event will be the best of them all. Some of the artistes billed for the night include Lil Kesh, Viktoh and Adekunle Gold.

Benue State known as the food basket of the nation plays host to top comedians in a Christmas themed entertainment event, tagged: ‘Christmas Live in Benue’ which holds at The Dream Center in Makurdi.

‘Christmas Live in Benue’, is an end of the year music and comedy event organized by Dream Center, led by popular entrepreneur and media personality, Love Idoko. The event which will hold on Tuesday December 27, 2016 will star top comedians and musicians such as Gordons, I Go Dye, Osama, Adilarings, MC Fresh Boi and a host of others.

A Benue state indigene reminisces that Benue state has witnessed impressive entertainment events in past years where the likes of Basketmouth, 2face, Gordons, Banky W, Desmond Elliot , Omotola Jalade Ekeinde, Jackie Appiah, and a couple of other stars attended.

The Mavin all-star concert is a curated experience that is set to be one of the year end’s biggest Afrobeats events. It would be part of the annual LivespotXFestival and would feature an array of fan-centered activities that would be rolled out in the coming weeks.

It is exciting times for Mavin and fans of the label, and its COO, Tega Oghenejobo is even more pleased by the potential of the future, “This is a big win for the team, for the fans and for everyone who is looking at what is possible in our industry. Our coming concert is a celebration for us all. For Afrobeats”

‘Kizz Daniel Live in Lagos’, this singer and songwriter is set to deliver more memorable performances for his fans to close the year 2022.

Following a noteworthy year for the ‘Buga’ crooner, Kizz Daniel will be headlining at the Eko Convention Center, Victoria Island, Lagos on Saturday, December 17, 2022, to thrill his fans to a night of fantastic music and a great party vibe.

Over the years, with the growing consistency and influence of the singer, there have been conversations about Kizz Daniel having one of the most impressive catalogs of chart-topping tracks and ‘anthems’ earning him the respect of his peers.

Live Wire Concert in conjunction with Flyboy Inc will be bringing you this Awesome night of amazing music with hours of Kizz Daniel on stage along with other popular acts.

Tems has joined the list of artists who will be thrilling their fans in concert.

The Grammy nominated singer who has had an amazing year in music will be live on the concert in Abuja on December 17, courtesy of Paly Network Africa and El Carnaval.

Though details about the venue is yet to be revealed, tickets are already available for sale ranging from N20,000 for regular to N3,000,000 for a table

The event, set to hold at the La Campagne Tropicana, a beach at the Oniro of the state, is dubbed ‘Vibes on the Beach With BigWiz.’ The show is scheduled to hold on December 30, 2022.

Wizkid will round off the year on a high note. Moving all the glory and awards he received worldwide to his home country, particularly the state that made him. 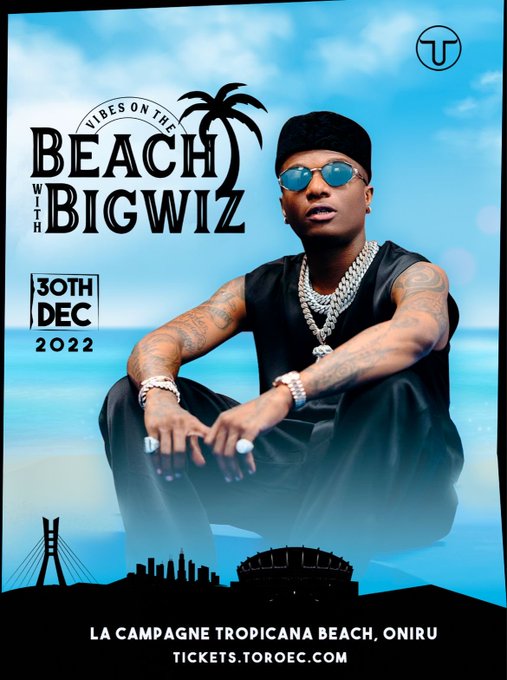 This is a remarkable recognition for the fans of the singer in the state because the ‘Ojuelegbe’ crooner has never joked with them, and he keeps appreciating their continued support for him.

Eventgoers at the upcoming ‘Vibes on the Beach With BigWiz’ would be among the first set of people to see the superstar perform songs off the body of work live.

Nigeria – Delta 2022: Hunting Of New Talents Should Be Our Focus

Brand Spur - December 3, 2022 0
Honourable Minister of Youth and Sports Development Sunday Dare is full of excitement considering the level of preparedness of many States as far as...