Our Urban Retail Price Tracker—the PURP index— recorded an increase of 0.77% MoM to 105.7 pts in the month of May (vs 0.69% MoM in April). Our survey revealed a mixed play of prices. While the brewery and commodities sector saw increased prices due to high transport cost and the ongoing Ramadan festival, prices in the consumer sector were largely lower MoM.

Volumes were generally higher across board.

The consumer sector saw a mixed play of prices with an overall decline in prices by1.56%. Amongst the products that witnessed price increase include Honeywell (12.82%) and Dangote pasta (13.89%) while Lipton (-15.22%) and Milo (-7.79%) saw the largest decline in prices. Overall, most of the decline was as a result of price discounts in the ongoing Ramadan festival.

The commodities basket increased 0.84% MoM in May. Prices were higher across board save for palm oil -0.69%. Over the period, both vegetable oil and rice witnessed price increases of 0.43% MoM and 2.25% MoM respectively. For palm oil, feedback from retailers showed that stability in prices has been driven by increased supply of the commodity. Elsewhere, feedback from retailers associated the general increase in the price of both vegetable oil and rice to higher transport cost in the month of May as well as the Ramadan festival which made it possible for retailers to raise prices.

Prices in the oil & gas sector expanded 1.72% MoM with prices of lubricants (+2.47%) accounting for the increase. Elsewhere, the price of cooking gas was relatively flat over the month.

The cement sector witnessed an increase in prices by 2.21% MoM. On volumes, retailers noted higher sales volume compared to the previous month. 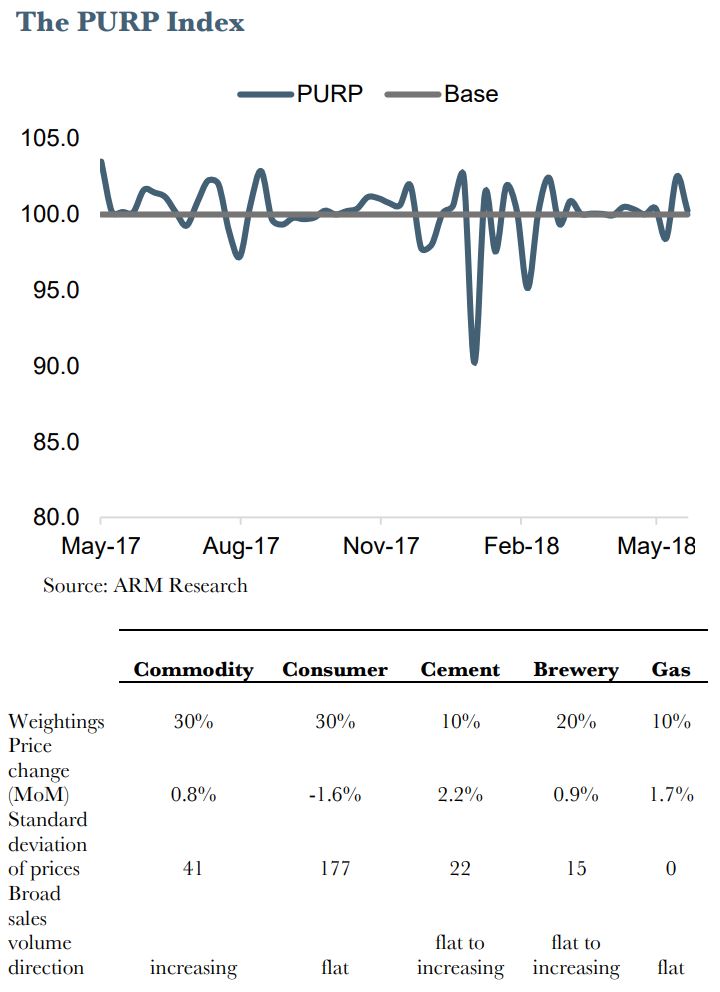 To determine how retail prices have moved on average, we fashioned out a Pentad Urban Retail Price Index (PURP) which adopts April 1st to April 8th as a base period. The PURP index accords 30% weightings apiece to consumer and commodities prices, 20% weighting to the brewery basket with a further 20% distributed evenly between cement and cooking gas prices.

Across the sectors, price evolution is monitored on a weekly basis while we adopt 0.6%, 0.0%, and -0.6% as indicators for volume expansion from the prior week, no change in volumes, and week on week output contraction (respectively) in a manner slightly akin to CBN’s PMI methodology. 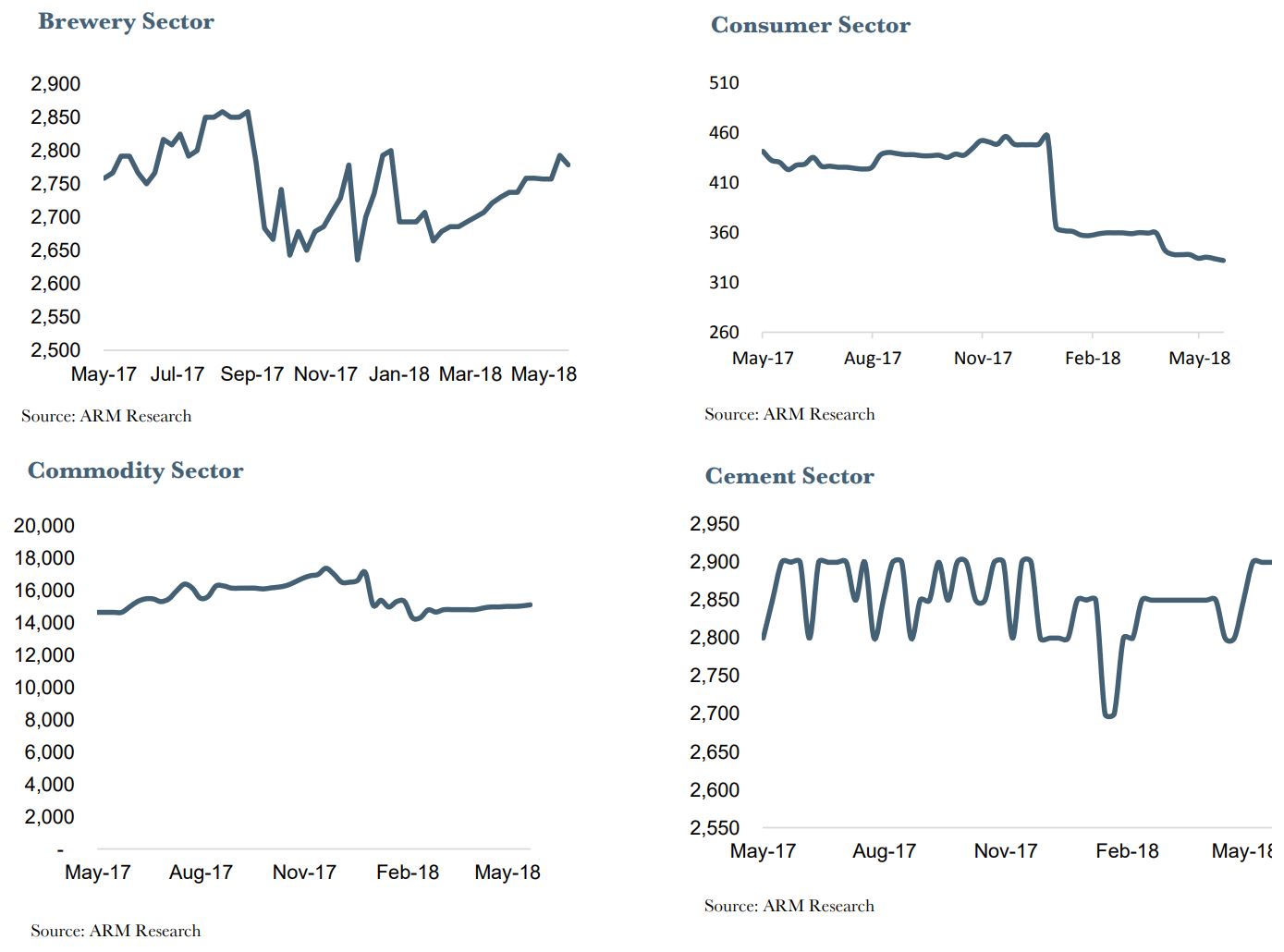 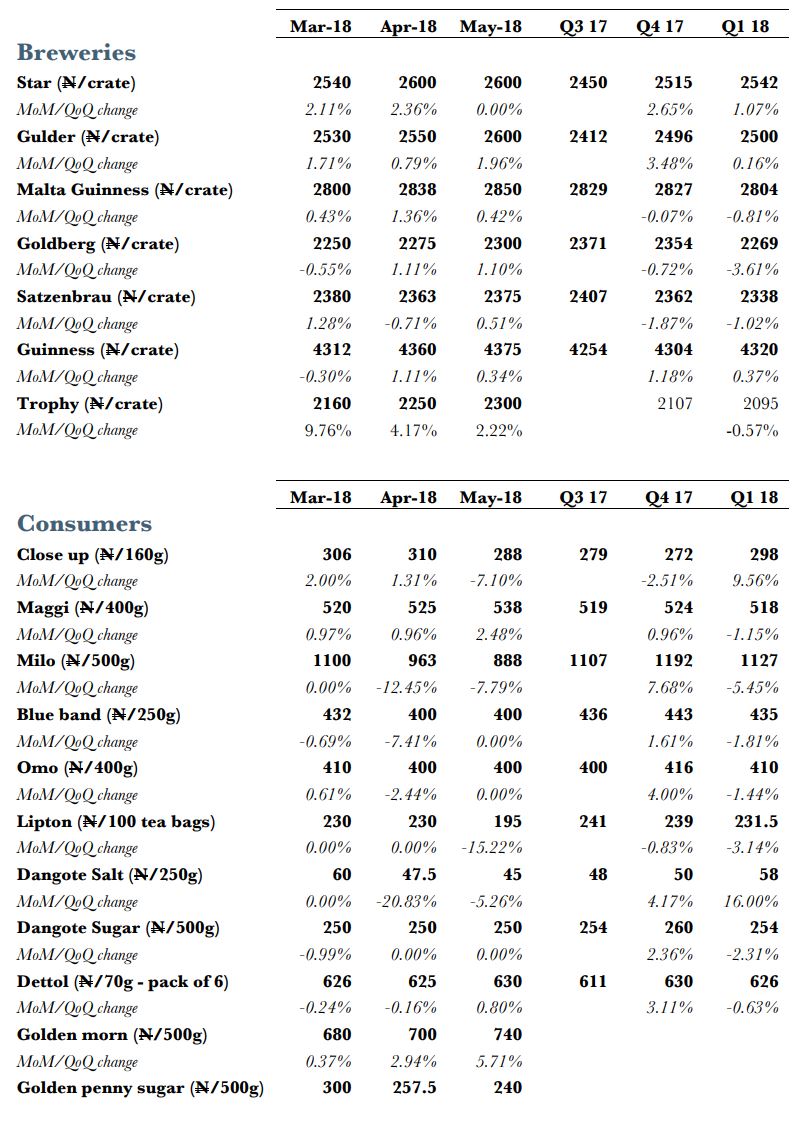 COVID-19: Too poor to stay safe

A large number of Nigerian households could not afford to buy sufficient supplies of the water they needed for handwashing, a survey in June...
Read more
Entertainment & Lifestyle

Full hips are considered to be the ultimate feminine feature and are coveted by millions of women around the world. If you are naturally...
Read more
News

How to finance your SME

SMEs are the foot soldiers of any economy. In developing economies, they are even more important. Small businesses largely do not make use of...
Read more
- Advertisement -

AB InBev to invest up to $400m in its Sagamu Plant

Anheuser-Busch InBev (AB InBev), the world’s largest beer maker, expects the total investment in its new brewery at Sagamu in Nigeria, to be up...
Read more

As part of efforts to eliminate the display and sale of unwholesome products particularly at the various major stores in the State, the Lagos...
Read more

The Consumer Price Index (CPI), which measures inflation, further decreased to 11.31 per cent (year-on-year) in February compared to 11.37 per cent in January,...
Read more

The year 2017 threw up a legion of evident consequences of the underlying intrigues that permeated every aspect of life in Nigeria. If we...
Read more
- Advertisement -