A fall in the FAAC distribution

The total monthly payout by the Federation Account Allocation Committee (FAAC) for distribution to the three tiers of government amounted to N699bn (US$2.28bn) in October (from September revenues). This was a decrease of N43bn from the previous month’s distribution.

The commentary from the federal finance ministry noted that the average monthly oil price had dropped from US$77.1/b to US$75.7/b. Additionally, there were pipeline shutdowns, resulting in the shut-in of some production. However, crude oil export sales managed to pick up marginally on August. 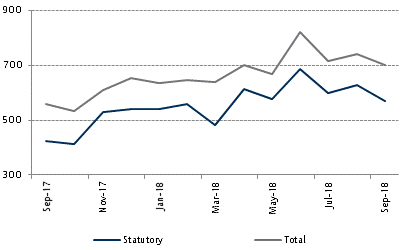 Revenue of Lekoil Dips by 38%, Scraps Shareholder Payout in Q2

LEKOIL, the oil and gas exploration and production company with a focus on Nigeria and West Africa, reports its...
Read more
Retail - Brick & Click

Due to various factors, some fans might not be available to watch live sports events hence they turn to highlights. Social media is now...
Read more
Business & Economy

International migration to fall in 2020 for the first time in recent decades WASHINGTON, October 29, 2020 — As the COVID-19 pandemic and economic crisis continues...
Read more
Telecom & IT

Google’s Share of Global Digital Media Revenues Declined By 2.7% in Q2 To A Six-Year Low

While it is still the world’s largest digital media company by some distance, Google’s digital media revenues fell by 7.0% in Q2 2020 to...
Read more
- Advertisement -

The Federation Accounts Allocation Committee (FAAC) was, on Wednesday, reported to have shared N676.407 billion as federation allocation for the month of July 2020. A...
Read more