The report, released by the International Institute of Finance (IIF) on Thursday, showed that global debt surged by $7.5 trillion in the first six months of 2019. The IIF said the overall number hit $250.9 trillion at the end of this period and will exceed $255 trillion by the end of 2019.

Global debt on track to exceed $255 trillion in 2019: Spurred by looser financial conditions, the ballooning global debt load increased by $7.5 trillion in H1 2019—and now hovers near a new record of over $250 trillion (320% of GDP). China and the U.S. accounted for over 60% of the increase. Similarly, EM debt also hit a new record of $71.4 trillion (220% of GDP). With few signs of a slowdown in the pace of debt accumulation (see below), we estimate that global debt will surpass $255 trillion this year (Chart 1). 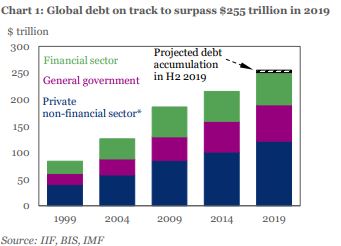 Debt outside the financial sector hits $190 trillion: With non-financial sector debt rising faster than global economic activity, the world’s debt pile (ex-financials) now tops 240% of GDP (or $190 trillion). Across sectors, government debt (+1.5%pts) saw the biggest rise in H119, followed by non-financial corporates (+1%pt). We estimate that global government debt will top $70trn in 2019, up from $65.7trn in 2018—driven mainly by the surge in U.S. federal debt. With net borrowing by the Chinese corporate sector on the rise again, we expect global non-financial corporate debt to rise by 6% to over $75 trillion this year.

Watch out for contingent liabilities: The big increase in global debt over the past decade—over $70 trillion—has been driven mainly by governments and the non-financial corporate sector (each up by some $27 trillion). For mature markets, the rise has mainly been in general government debt (up $17 trillion to over $52 trillion). However, for emerging markets, the bulk of the rise has been in non-financial corporate debt (up $20 trillion to over $30 trillion). Moreover, available data suggest that state-owned enterprises (SOEs) now account for over half of EM non-financial corporate debt—meaning that sovereign-related borrowing has been the single most important driver of global
debt over the past decade. This trend also highlights the challenges many EM governments are likely to face in managing contingent liabilities related to SOE borrowing (see for example our recent note on South Africa).

Limits to debt-fueled growth: With over 60% of the world’s countries expected to see below-potential growth in 2020, accommodative central bank policy allows both corporates and sovereigns to borrow and refinance at low rates. However, with diminishing scope for further monetary easing in many parts of the world, countries with high levels of government debt (Italy, Lebanon)—as well as those where government debt is growing rapidly (Argentina, Brazil, South Africa, and Greece)—may find it harder to turn to fiscal
stimulus. Moreover, investor appetite for funding the corporate sector in high-debt countries is sensitive to shifts in global risk sentiment; if this appetite wanes, it could weigh on CAPEX and new job creation. With FX debt in EMs at record highs (Chart 2), greater reliance on FX borrowing in some countries (Argentina, Saudi Arabia, Turkey, Mexico, Chile)
could exacerbate the risks if growth slows further (see Charts 11-16).

Global foreign direct investment collapsed in 2020, falling by 42% to an estimated $859 billion from $1.5 trillion in...
Read more
Business & Economy

In the just concluded week, the NSE ASI retraced into negative territory amid sell-offs witnessed on the mid and large-cap stocks. We saw investors...
Read more
Business & Economy

Naira Appreciates Against the USD at Investors and Exporters Window

In the just concluded week, Naira strengthened against the USD at the Investors and Exporters window as the exchange rate fell (Naira appreciated) by...
Read more
Business & Economy

Credit to Private Sector Rises in Nov. 2020; MPC Decides on Policy Rate in the New Week…

Global Original Equipment Manufacturer (OEM) Lenovo has continued to astound market watchers, dominating worldwide PC shipments on the back of a rise in demand. The...
Read more
- Advertisement -

Official data published by the National Bureau of Statistics (NBS) last week shows that Nigeria has formally moved into a technical recession, following its...
Read more