The 4th Annual Meeting of the African Economic Zones organized by the Africa Free Zones Organisation (AFZO) at the African Union Headquarter in Addis Ababa, Ethiopia

ADDIS ABABA, ETHIOPIA – Media OutReach – 21 November 2019 – Africa Free
Zones Organisation (AFZO) organized on November 19th, 2019, at the
African Union Headquarters in Addis Ababa, Ethiopia, its 4th Annual
Meeting, under the theme “Economic Zones — Accelerator for Industrialization in
Africa”, with the support of the Department of Trade and Industry of the
African Union Commission (AUC). 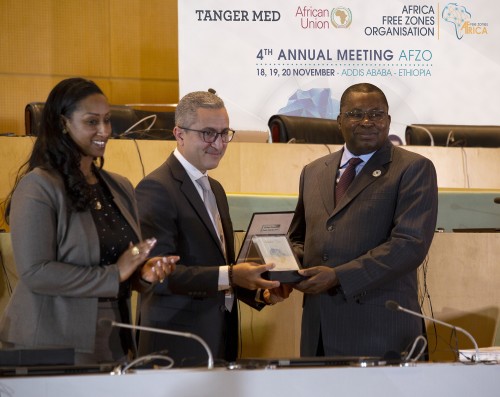 The meeting was held during the
“Africa Industrialization Week”, organized by the African Union from the 18th
to the 22nd November 2019.

Several international speakers representing international and financial
institutions such as UNCTAD, UNIDO, UNECA, AfDB etc. shared during this event
their expertise on effective means for economic zones development in Africa. In
this respect, various topics related to challenges and trends of African
economic zones were addressed including strategic directions and effective
governance model, contribution of economic zones for FDI growth and job
creation, importance of logistics competitiveness within economic zones, skills
development and training.

AFZO was founded back in 2015 by
Tanger Med along with other African economic zones.

Africa Free Zones Organisation
brings together the leading African economic zones and institutions in charge
of the development, management and promotion of economic zones in our
continent.

–
Setting
up of tailored model for economic zones development

The Organisation currently has more
than 72 members representing 37 African countries.

To this end, several actions have
been organised by AFZO this last year, including:

–
4
regional meetings in several countries including Ghana (Accra), Gabon
(Libreville), and Togo (Lomé). These workshops brought together more than 500
participants from 30 different countries.

–
Training
sessions for members, led by international experts on topics related to
economic zones. These sessions benefited more than 200 participants.

–
Production
of the first comprehensive economic zones database “Atlas Book”,
including all relevant information on areas such as macroeconomic data,
investment attractiveness, and regulations and laws.

–
Establishment
of a Knowledge Center including several reports and studies on the economic
zones, as well as an interactive exchange platform facilitating the sharing of
documentation and best practices.

–
Presentation
of the “African Economic Zones Outlook” through an analysis of
African economic zones, their contribution in attracting FDI and job creation
as well as prevailing PPP development models.

Sanofi announced today the successful completion of its acquisition of Principia Biopharma Inc (“Principia”) for $100 per share in...
Read more
Business & Economy

The Cross River Government has acquired 10,000 hectares of land across the state for the cultivation of Cocoa in the 2020/2021 planting season. Dr Oscar...
Read more
Business & Economy

The Board of Chemical and Allied Products Plc will meet in Lagos on Monday, October 19, 2020, to consider among other things, the Company’s...
Read more
Health

The Director-General of the Food and Agriculture Organization of the United Nations (FAO), QU Dongyu, today praised the work of the Codex Alimentarius Commission...
Read more
- Advertisement -