The Nigeria National Bureau of Statistics (NBS) in the coming week is expected to publish the November 2019 Consumer Price Index report (CPI) to show the direction of movement (up or down) in the general price level (Inflation rate) of goods and services in the economy for the month. 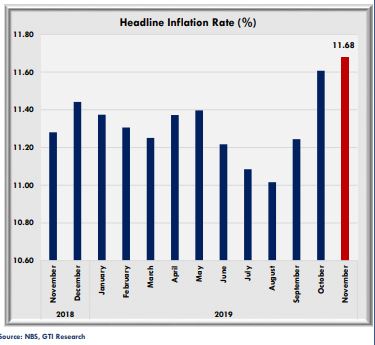 As such, we conducted a Pre-CPI report analysis, and our findings suggest that the Headline inflation rate (a measure of the average change in the price level of both food and non-food items) will climb by a minimum of 7bps to 11.68% y/y from 11.61% in the preceding month. This modest upsurge we believe will mainly be driven by a joint increase in both the Core inflation (i.e. non-food items price index) and Food inflation (i.e. food price index). 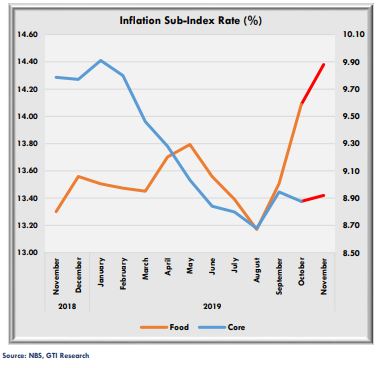 Our position is hinged on the projected effect of three notable drivers within the month – seasonality effect, FX inflows reduction, and conflict report in some agrarian communities.

First, we expect the characteristic increase in end-of-the-year consumer spending to drove up prices on foods, clothing items, transportation, and recreation services (to mention but few) in November.

Secondly, we expect the negative impact of reduced FX inflows due to oil price and output volatility (at a time demand for FX by domestic importers is high), and CBN continuous draw-down on the foreign reserves balance (which has led to Nigeria external reserve slipping to $39bn) to pressure Core inflation (nonfood items price index) to 8.92% y/y (or 0.72% m/m) from 8.88% y/y (or 0.74% m/m) in the preceding month.

Thirdly, the recent reports of conflicts in some agrarian communities in the Middle-belt and core North (which has affected the supply and prices of some farm produce at a time the land border remains shut by the federal government) are expected to negatively impact food price inflation. As such, we expect the food price sub-index to climb to 14.38% y/y (or 1.36% m/m) from 14.09% y/y (1.33% m/m) in the previous month. This we anticipate being more pronounced on the prices of staple food items such as rice, yam, pepper, and vegetable.

Hence, we project a minimum of 7bps rise in the Headline inflation rate to 11.68% for November 2019.

In March 2021, OPEC revised its expectation for oil demand for the year to 96.27 Mbpd (from 96.05 mbpd), while OPEC+ maintained existing production...
Read more
- Advertisement -