In its recently released 9M’20 result, Honeywell Flour Mills Plc (‘The Group” or “Honeywell”) grew revenue by 6% year-on-year from N55.08bn in 9M’19 to N58.23bn in 9M’20. As of 6M’20, revenue growth was 9%. The decline in revenue growth rate between 6M’20 and 9M’20 resulted from flat revenue growth in Q3’20. In Q3’20, revenue was flat at N18.78bn (Q3’19: N18.85bn). The revenue performance in Q3’20 was below expectations, as the border closure policy was expected to positively impact sales growth for the Group. Compared to Flour Mills of Nigeria Plc who grew its topline by 17% in the same period, it appeared that the Group did not take advantage of the upside from the border closure. In our view, the Group’s revenue performance in Q3’20 possibly suggests a declining market share amid major competitors like Flours Mills of Nigeria Plc and Olam International.

Relative to the previous period, cost margin declined by 100 basis points to 82% in 9M’20 (83% in 9M’20) despite a 5% increase in the cost of sales to N10.24bn from N9.44bn in 9M’19. The lower cost margin despite an increase in the cost of sales was due to higher revenue growth of 9%. Although we note that the cost margin of the Group remains below that of the market leader (Flour Mills of Nigeria at 88%), we believe that the industry is characterised with high-cost margins owing to the impact of high operating leverage. High operating leverage only becomes beneficial when sales accelerate. However, the relatively poor sales in the industry due to shrinking consumer’s purchasing power has resulted in pressured margins. Typically, high operating leverage increases risk and does not create enough flexibility which affects the bottom line. Gross profit, however, grew by 9% year-on-year to N10.24bn in 9M’20 from N9.43bn in 9M’19.

Finance costs rose by 60% year-on-year to N5.25bn in 9M’20 from N2.65bn in 9M’19, despite a 1% decline in total borrowings from N53.44bn in 9M’19 to N53.03bn in 9M’20. From our analysis, we realised that in 6M’20, owing to an N8.57bn working capital deficit relative to an N3.01bn operating cash flow made, the Group resorted to an N6.07bn borrowings. The implication was an increase in finance costs by 110% as of 6M’20. However, in Q3’20, payments to suppliers were delayed, thus, enabled the Group to use the cash generated to repay a part of its existing debt. The higher finance costs incurred in Q3’20 (especially on a quarter-on-quarter basis) suggests that debt repayment was probably done towards the end of Q3’20. 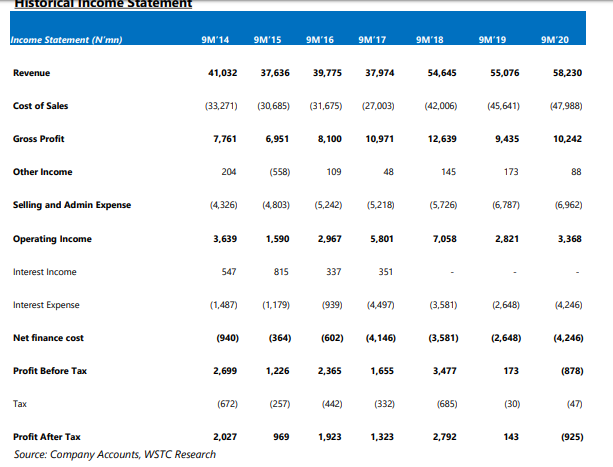 The management of Honeywell Flour Mill Plc on Tuesday disclosed that Dr. Raymond Zoukpo, a non-executive director of the company, purchased 204,541 shares in...
Read more