Headline Inflation Climbs to 12.13% …as Food Prices Continues to Surprise to the Upside 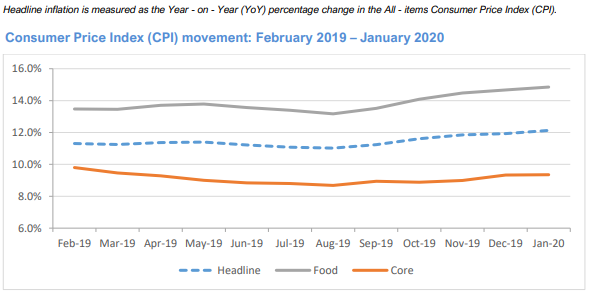 recorded in all composites of the consumer price index (CPI). Though the composites vary in their weighting and contributions, the Food sub-index which contribute c.50% to the index rose YoY by

18bps from 14.58% to 14.85% in January 2020. Though the MoM increase was mute, we attribute the continued pressure in food prices not just to the sustained land border closure alone but also the weak transportation system which has continued to exact upward price pressures on transportation. Also contributing to the increase was the interplay of demand and supply, as Nigeria is yet to attain self-sufficiency in food production.

sub-index rose by 17bps YoY from 9.91% to 10.08%, which we believe explains partly the disruption in the supply side of things for cheap smuggled clothes and footwear occasioned by the sustained land border closure and thus price pressures.

We expect to see the impact of the new VAT increase, which became effective February 1, 2020, in the inflation readings for the coming months. We expect to continue to see price pressures occasioned by system liquidity amid limited viable investment outlets in the CPI. We also believe

that the proposed energy tariffs hike in April 2020 portents a downside to Headline inflation.

Core inflation increased by 2bps year-on-year to 9.35% in January 2020 from 9.33% in December 2019. Month-on-month, the index increased to 0.82%, from 0.81% in December 2019. The major price increases were recorded in Cleaning, Repair and Hire of Clothing; Hairdressing, saloons, and personal grooming establishment; Garment; Vehicle Spare Parts; Glassware, Tableware, and Household Utensils; Shoes and Other Footwear; Repair and Hire of Footwear; Passenger Transport by Air; and Hospital Services.

The prices of poultry products in Nigeria are at their highest levels ever as the country faces its worst food inflation in at least...
Read more
- Advertisement -