The Taraba State Government on Tuesday announced that there will be a total lockdown throughout the state beginning from Wednesday, April 22, at 11:00 pm and all violators of this directive will be arrested and prosecuted. 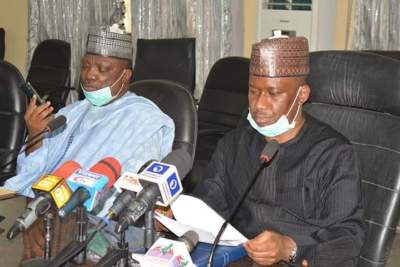 This was contained in the statewide broadcast by the deputy governor, Engr. Haruna MANU where he addressed Tarabans on matters relating to the COVID-19 pandemic and the decisions taken by the state government to further safeguard the people from the affliction.

Engr. Manu said that this decision has become necessary in view of the increasing number of confirmed cases in our neighbouring states stressing that in spite of the fact that we have not recorded any confirmed case in Taraba so far, we must not be complacent.

The deputy governor said that the state government has, therefore, resolved to take the following decisive steps.

“Vehicles found on the road during the period of the lockdown will be impounded.

“A mobile court will be established to promptly try offenders at the various points of entry into the state.

“Regulated movement of the public is only allowed between 10am and 2pm on Wednesday and Saturday to allow citizens to purchase household essentials.

“The only exceptions are workers on essential duties such as health workers, pharmaceutical shops, fuel stations, media houses etc.

“Security operatives are to henceforth check private and commercial vehicles violating the principles of social distancing by overloading their vehicles with passengers.

“That security operatives should check the influx of commercial tricycles popularly called Keke NAPEP, from unknown destinations into Jalingo metropolis and other towns in the State.

“That the security operatives should arrest any unauthorized motorcycle movement within Jalingo metropolis, since the ban on the use of motorcycles for commercial purposes is still in force.

“Worship centres, such as Mosques and Churches are hereby closed until further notice.

The deputy governor said that security operatives have been ordered to mount surveillance checkpoints in Ibi, Wukari, Mayo-Lope, Zing, and Takum-Katsina/Ala entry points.

Read Also:  Oyo State Government Says It Expended About 2.8 Billion Naira In The Fight Against COVID-19

He thanked Tarabans for their cooperation so far on the COVID-19 preventive measures introduced by the state government and urged all to be more patient and vigilant so we can jointly keep the pandemic away from our dear state.

Engr. Manu also reminded Tarabans on the importance of regular washing of hands, use of sanitizers, social distancing and the need for us to stay at home as these have proved globally to be effective weapons against the spread of the Coronavirus.

A recent report published by the Project Management Institute (PMI) from its 2020 Pulse of the Profession data, shows that on average, about 11.4%...
Read more
- Advertisement -