“Uniting mankind beyond borders, race, and religion through music” 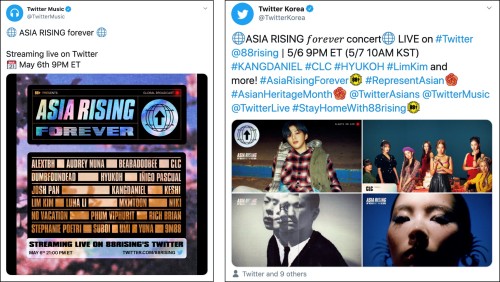 SEOUL, SOUTH KOREA – Media OutReach – 4 May 2020 – Twitter
will host a live broadcast titled ’88rising Presents: ASIA RISING FOREVER’
(hereinafter “Asia Rising Forever”) global concert. 88rising is a music label
that introduces and promotes Asian artists in the United States. The label is
home to a number of popular Asian musicians such as Rich Brian – who released a
collaboration with Chungha last year, increasing his popularity in Korea –
NIKI, and Keshi.

This commemorative broadcast will be
streamed live through 88rising’s official Twitter account (@88rising),
and will run for four hours starting from 10 a.m. on May 7, Korean time (May 6,
9 p.m. Eastern Time) in time for the Asian-Pacific American Heritage Month.
People can join the real-time conversations on the special event page (https://twitter.com/i/events/1256289526319706112).

During Asia Rising Forever, people on
Twitter will get to enjoy the performances of more than 20 teams of domestic
and foreign artists who are quickly gaining popularity in the United States.
From Korea, KANGDANIEL (@konnect_danielk),
CLC (@CUBECLC), Hyukoh (@hyukohh),
and Lim Kim (Yerim Kim) will participate. Beyond Korea, Asian musicians such as
NIKI (@nikizefanya), Keshi (@keshimusic)
and Rich Brian (@richbrian) will perform. Participating artists will
showcase a variety of content such as exclusive interviews, surprise games, and
intimate performances from their bedrooms through this Asia Rising Forever
livestream. Fans will still get to enjoy a highlight clip on Twitter after the
broadcast ends. There will also be a special Q&A with CLC (@CUBECLC).

Read Also:  Taxify Reduces Rates In A Bid To Snap Up Customers From Uber
- Advertisement -

During the live broadcast, donations will
also be raised to overcome racial discrimination against Asians around the
world due to COVID-19.

“Music
has the power to bring people together across borders, races and religions,”
said YeonJeong Kim, Head of Global Kpop
& K-content Partnerships at Twitter. “I hope this Twitter Live will bring the world together to gain momentum
to overcome COVID-19.“

Twitter continues to  collaborate
with Kpop artists to overcome COVID-19 with various activities including the #StayHome
and #SafeHands campaigns. Twitter also live-streamed a
full concert video of Kpop group “Golden Child” (@GoldenChild)
with hashtag #StaySafeWithGoldenChild in
March to encourage people to overcome “Corona-Blue” – the gloominess people may
be feeling due to COVID-19. 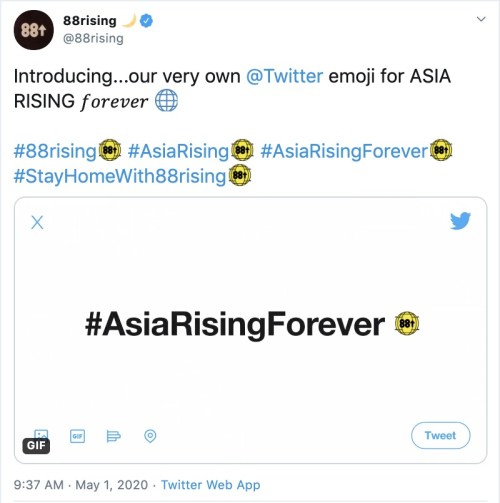 Twitter, Inc. (NYSE: TWTR) is what’s happening in the
world and what people are talking about right now. On Twitter, live comes to
life as conversations unfold, showing you all sides of the story. From breaking
news and entertainment to sports, politics and everyday interests, when things
happen in the world, they happen first on Twitter. Twitter is available in more
than 40 languages around the world. The service can be accessed at twitter.com, on a variety of
mobile devices and via SMS. For more information, visit about.twitter.com or follow @TwitterKorea. For
information on how to download the Twitter and Periscope apps, visit twitter.com/download and periscope.tv.