SINGAPORE – Media OutReach – 4 May 2020 – Spackman Entertainment Group
Limited (“Spackman Entertainment Group” or the “Company” and
together with its subsidiaries, the “Group“), wishes to announce that TV
Chosun’s K-drama, WIND, CLOUDS AND RAIN, featuring up-and-coming Korean
actress Ko Sung-hee of MS Team Entertainment Co., Ltd. (“MS Team“), a
wholly-owned subsidiary of the Group’s associated company, Spackman Media Group
Limited, is expected to be broadcast on 17 May 2020. 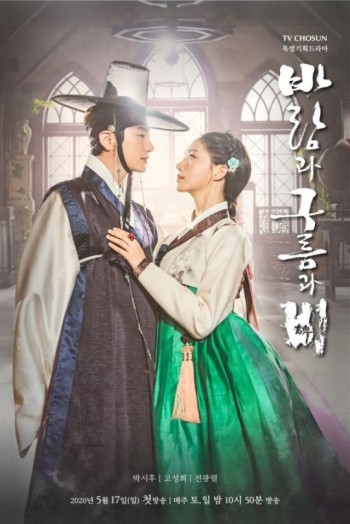 Based on the novel of the same title in Korean 바람과 구름과 비 (BARAMGWA
GOOREUMGWA BI) by Lee Byung-Joo, WIND, CLOUDS AND RAIN, relates the
story of a fierce struggle for the throne in Joseon. The 24-episode historical
period K-drama series also headlines Park Si-hoo of LOVELY HORRIBLY
(2018) and BABEL (2019). MS Team’s Ko Sung-hee previously starred in
Netflix’s MY HOLO LOVE (2020) and SUITS (2018).

Produced by Victory Contents and Higround, WIND,
CLOUDS AND RAIN is directed by Yoon Sang-ho, originally written by Lee Byung-joo
and screen-written by Bang Ji-young.

Played by Park Si-hoo, Choi Chun-joong is the best
face reader in the nation. He was born into a prestigious family, but his
family was killed. He is looked down upon as a fortune-teller, but eventually he
becomes the most powerful person in Joseon. He is aware of Joseon’s fate and
tries to change it.

Ko Sung-hee takes on the role of Lee Bong-ryeon,
the princess and the daughter of King Cheoljong. She has a special ability to
see the fate of people. Her ability is a blessing and, at the same time, a
curse to her. Lee Bong-Ryeon meets Choi Chun-Joong and tries to change the fate
of Joseon for the better.

The official main poster for WIND, CLOUDS AND
RAIN has been released today.

Spackman
Entertainment Group Limited (“SEGL”
or the “Company“), and together with
its subsidiaries, (the “Group“), one
of Korea’s leading entertainment production groups founded by media investor,
Mr. Charles Spackman, is primarily engaged in the independent development,
production, presentation, and financing of theatrical motion pictures in Korea.
In order to diversify our revenue streams, we have expanded our business
portfolio to include the production of Korean television dramas. In addition to
our content business, we also make investments into entertainment companies and
film funds that can financially and strategically complement our existing core
operations. SEGL is listed on the Catalist of the Singapore Exchange Securities
Trading Limited under the ticker 40E.

SEGL’s
Zip Cinema Co., Ltd. (“Zip Cinema“)
is one of the most recognised film production labels in Korea and has
originated and produced some of Korea’s most commercially successful theatrical
films, consecutively producing 10 profitable movies since 2009 representing an
industry leading track record. Recent theatrical releases of Zip Cinema’s
motion pictures include some of Korea’s highest grossing and award-winning
films such as CRAZY ROMANCE (2019), DEFAULT (2018), MASTER
(2016), THE PRIESTS (2015), COLD EYES (2013), and ALL ABOUT MY WIFE (2012). For more
information on Zip Cinema, do visit http://zipcine.com

SEGL
also owns Novus Mediacorp Co., Ltd. (“Novus
Mediacorp“), an investor, presenter, and/or post-theatrical distributor for
a total of 79 films (58 Korean and 21 foreign) including ROSE OF BETRAYAL, THE OUTLAWS
and SECRETLY, GREATLY, which was one
of the biggest box office hits of 2013 starring Kim Soo-hyun of MY LOVE FROM THE STARS fame, as well as FRIEND 2: THE GREAT LEGACY. In 2012,
Novus Mediacorp was also the post-theatrical rights distributor of ALL ABOUT MY WIFE, a top-grossing
romantic comedy produced by Zip Cinema. In 2018, THE OUTLAWS, co-presented by Novus Mediacorp broke the all-time
highest Video On Demand (“VOD“)
sales records in Korea. For more information on Novus Mediacorp, do visit  http://novusmediacorp.com

Read Also:  Achiko establishes a joint venture with PT Indonesia Farma Medis for the production and distribution of its test platform for Covid-19 in Indonesia

Our
films are theatrically distributed and released in Korea and overseas markets,
as well as for subsequent post-theatrical worldwide release in other forms of
media, including cable TV, broadcast TV, IPTV, video-on-demand, and home
video/DVD, etc. We release all of our motion pictures into wide-theatrical
exhibition initially in Korea, and then in overseas and ancillary markets.

We
also operate a café-lounge called Upper West, in the Gangnam district of Seoul
and own a professional photography studio, noon pictures Co., Ltd..

The
Company holds an effective shareholding interest of 43.88% in Spackman Media
Group Limited (“SMGL“). SMGL, a
company incorporated in Hong Kong, together with its subsidiaries, is
collectively one of the largest entertainment talent agencies in Korea in terms
of the number of artists under management, including some of the top names in
the Korean entertainment industry. SMGL operates its talent management business
through renowned agencies such as MS Team Entertainment Co., Ltd., UAA & Co
Inc., Fiftyone K Inc., SBD Entertainment Inc., and Kook Entertainment Co., Ltd.
Through these full-service talent agencies in Korea, SMGL represents and guides
the professional careers of a leading roster of award-winning actors/actresses
in the practice areas of motion pictures, television, commercial endorsements,
and branded entertainment. SMGL leverages its unparalleled portfolio of artists
as a platform to develop, produce, finance and own the highest quality of
entertainment content projects, including theatrical motion pictures, variety
shows and TV dramas. This platform also creates and derives opportunities for
SMGL to make strategic investments in development stage businesses that can
collaborate with SMGL artists. SMGL is an associated company of the Company.

The Company owns a 100% equity interest
Take Pictures Pte. Ltd.
(“Take Pictures“) which has a
line-up of several films including STONE SKIPPING (working title),
GUARDIAN (working title) and the co-production with Zip Cinema for THE PRIESTS 2.

The Company owns a 100% equity interest in Greenlight Content
Limited which is mainly involved
in the business of investing into dramas and movies, as well as providing
consulting services for the production of Korean content.

The
Company owns a 100% equity interest in Simplex Films Limited (“Simplex Films“)
which is an early stage film production firm. Simplex Films has
the following films in the pipeline namely, A BOLT FROM THE BLUE, IRREVOCABLE
PROMISE and OUR SUPERSTAR K.

For
more details, do visit http://www.spackmanentertainmentgroup.com/