In 2019, monetary policy authorities gradually took a dovish stance, due to the fragility of global growth and the dilemma with low inflation rates. In 2020, the outbreak of COVID-19 sent global central banks on a tsunami of expansionary monetary policies, ranging from huge rate cuts to quantitative easing, and less conventional tools like helicopter money.

Notably, the US Federal Reserve (Fed) led the way as it delivered a surprise rate cut of 50bps after an emergency meeting and a subsequent 100bps cut which settled the Federal Funds rate at 0-0.25% band. Similarly, the Bank of England (BoE) dropped policy rates to 0.1% vs 0.75% at the beginning of the year. However, with policy rates already in the negative region, the European Central Bank (ECB) took a more cautious approach, expanding its asset purchase program by €750.0bn. Also, the  Peoples Bank of China (PBC) injected liquidity amounting to about RMB3.8tn into the banking system and cut interest rates on reverse repos, medium-term lending facilities and excess reserves. 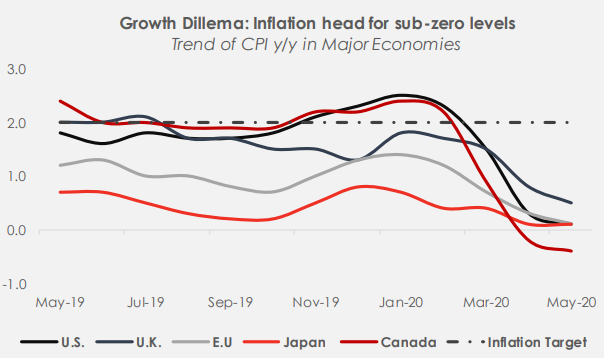 Finally, the size of liquidity injection was robust, with the Fed pumping $2.3tn, and the EU finance ministers approving a €500.0bn rescue package. Going into H2-2020, we expect the sheer size of the monetary stimulus to support the global economy, or at least ease the pain. By implication, global monetary policy authorities will continue to use all possible tools to ensure a speedy economic recovery. Overall, while this may not immediately stall a global economic recession, liquidity in the global economy will be enormous, thereby strengthening risk-on sentiment and the flow of capital towards assets with attractive yields.

For a company as long-standing as Coca-Cola, it is quite remarkable that it has managed to stay well within...
Read more
Brand News

Guaranty Trust Bank Plc (GTBank) has long been regarded by industry watchers as one of the best run financial institutions in Africa, a reputation...
Read more
Business & Economy

Diageo today admitted profits for the past year plunged 47% hit by the closure of the on-trade activities and the cancellation of sports events...
Read more
Beverages: Alcoholic & Non-Alcoholic

Diageo Plc announces change to its Board of Directors