5 Drinking Games to play at Parties

Detty December is fast approaching and although there might not be any concerts, there would be a lot of house parties and game nights. If you’re thinking of hosting a house party and you’re not sure which drinking games to play, check out our list below:

To start this game, one player says the name of someone famous, and then the following person has to say the name of someone else famous whose name starts with the first letter of the other person’s surname. So if player one says Kemi Adetiba, player two would say Adele. If you can’t think of a name immediately, you have to drink while you’re thinking. 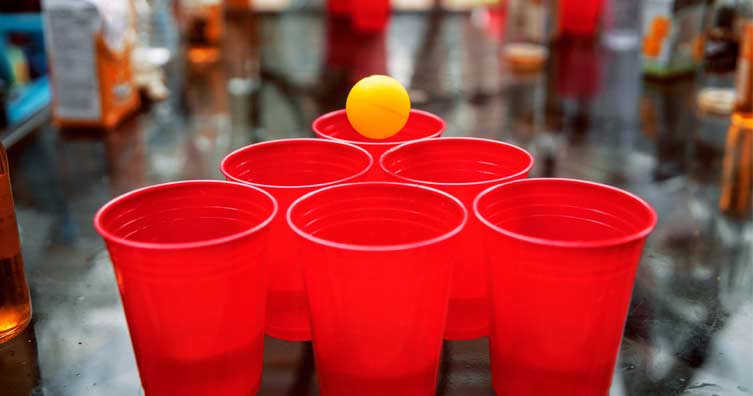 Two people in your group stand back to back, drinks in hand. The rest of the group ask them a ‘Who’s the most likely to….’ question, and whichever member thinks they’re the most likely to, drinks. If one of them drinks, you ask the next question. If they both drink, they both have to drink again. If neither of them drinks, they also both have to drink again.

This is a team game, where two opposing groups stand on opposite sides of a table or counter, with a full cup in front of each player. The games begin and the first players in line race to down their drinks, and then place their empty cups upside down on the edge of the surface. They then have to successfully flip their cups the right way up – not so easy once you’ve had a few – at which point the next player in line has to do the same. It’s a relay, so the first team to get to the end wins!

You’ll need a dice and six different cups of differing sizes, ranging from a shot all the way up to a huge mug. Each cup corresponds with a different number on the dice – players roll the dice, and then have to drink the contents of whichever cup they’ve been assigned. P. S: put something with a mixer in the bigger glasses or you won’t last long!

If you can handle your liquor and bluff like a champ, this is the game for you. It’s a roulette-style situation where you line up a selection of various shot glasses, and fill some with clear spirits and others with water. Each player then has to take it in turns to choose and drink and a shot, and say ‘mmm, water!’ in their most convincing voice. If you call them out and say they’re lying, and you’re right, they drink another – but if you’re wrong, you have to take a shot.