The African Development Bank, the United Nations, and the African Union on Saturday acknowledged the significant progress made in implementing Agenda 2063 and urged African countries to go further to fast-track economic transformation.

The call was made on Saturday at the launch of the first report on the implementation of Agenda 2063 ahead of the 33rd African Union Summit in Addis Ababa. The report provides an assessment of the progress and performance of Africa’s development between 2013 and 2019.

Unveiling the implementation report, President Alassane Ouattara of Côte d’Ivoire noted that while remarkable progress had been made, the continent still had a long way to hit its development targets.

“In five years, we have come a long way in implementing Agenda 2063. To go further, Agenda 2063 must be the responsibility of all the member states of the AU,” said Ouattara, who is also an Agenda 2063 champion.

In January 2013, the African Union adopted Agenda 2063: Africa We Want as a blueprint for sustainable development and economic growth. The First Ten-Year Implementation Plan of Agenda 2063, which runs from 2014 to 2023, outlines a set of goals, priority areas and targets that the continent aims to achieve at national, regional and continental levels, the report notes.

Referencing the African Development Bank’s critical role in spurring development across the continent, Ouattara said: “The Bank is in good hands under President Adesina. He is executing the mandate we gave him with brilliance and vigour – very exemplary.”

Ethiopia’s President Sahle-Work Zewde, noted that greater cohesion and hard work are required to achieve “the Africa of our dream.”

“The Ethiopian government is working with the African Development Bank and other development partners in the implementation of Agenda 2063, as enshrined in the country’s development plans,” she added.

The African Development Bank President Akinwumi Adesina urged African leaders to accelerate Agenda 2063: “We have to make sure, in everything we do, that we bring about implementation faster.”

The Bank President also called on heads of state to push for the continent’s pension and sovereign wealth funds to contribute to domestic prosperity.

“Sovereign funds of Africa are invested elsewhere. We need to make a decision that sovereign wealth funds, pension funds need to be invested in Africa, not elsewhere,” Adesina said. “Africa also needs to do more to stop illicit capital flows.”

Nkosazana Dlamini-Zuma, former AU Chairperson and South Africa’s Minister of Cooperative Governance and Traditional Affairs, called for the involvement of the Diaspora in economic development. 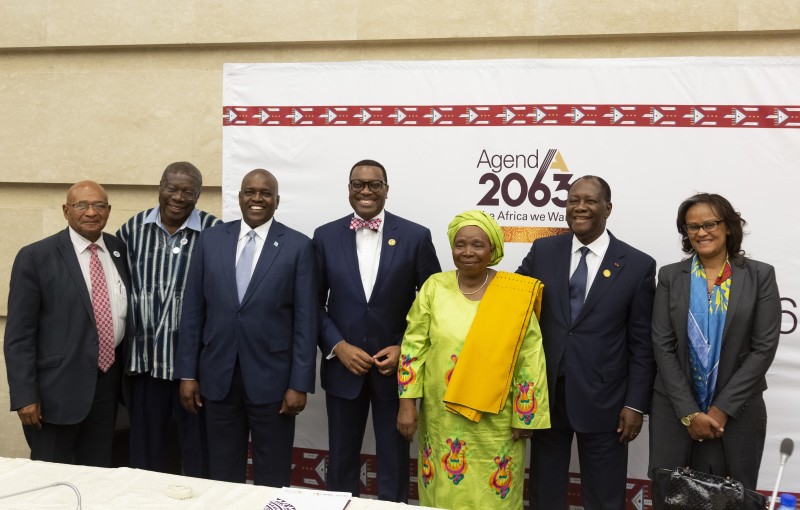 “They have the skills. Some of them may even have the resources to invest in our continent and even more passion than we have. Working with the AU and the African Development Bank, we need to galvanize the Diaspora,” she said.

“We can learn from what Ghana is doing with its recently launched Year of Return initiative. That is the beauty of Agenda 2063. We must learn from one another.”

On the report’s findings, Dlamini-Zuma identified the Bank’s High 5 strategic priorities as a strong reflection of results on the ground.

In a message read on his behalf at the event, Secretary-General of the United Nations António Guterres said: “Let’s do it together. Together, we will achieve the Sustainable Development Goals and Agenda 2063 for all our people.”

The event was also attended by the President of Botswana Mokgweetsi Masisi, who observed that the achievement of Agenda 2063 clearly required ownership at the country and regional levels. “The alignment of the agenda into the planning of countries, with a focus on linkages and impact, will ensure greater results.”

The Senegalese government has launched with support from the Better Than Cash Alliance (United Nations) (www.BetterThanCash.org), the World Bank, and the National Agency of...
Read more

The Nigerian government has taken delivery of the first set of 300,000 doses of COVID-19 vaccines out of a total of 1.4 million doses...
Read more

Empowering Women In Critical Sectors To Challenge The Status Quo

By Lamin Manjang Although women's rights have seen a significant positive change in the last decade, it remains a critical topic of conversation across various...
Read more
- Advertisement -