The major objectives of external reserves management in Nigeria are ensuring the preservation of capital, providing adequate liquidity to meet unforeseen needs and ensure that the reserves are readily available to finance day-to-day official transactions, as well as earning returns within the set tolerable risk limits.

On a MoM basis, Nigeria recorded negative inflation rate in June (-0.2%), October (-2.5%), November (-0.7%) and December (-0.8%). This shows the growth was stable as inflation was at the desired level and there was relatively increased domestic production of goods and services. It was also during this period that Nigeria successfully met the condition of debt relief from the Paris Club, which had its debt settled with the group.

The inflation rate declined by 140bps from 8% in January 2007 to 6.6% YoY in December 2007. The inflation rate on MoM basis was also low and we highlight that there was deflation in January, October and November MoM in 2007. The country also enjoyed increased real GDP growth during this period at 7.32%.

In 2008, Nigeria recorded the highest gross external reserves during the years under review with external reserve hitting the highest point of $64.73 billion on August 11th, 2008. This was a period of the boom as the equities market also rallied while hitting an all-time high of 64,834.33 points in March 2008 (before dropping to 20,436.40 points in April 2009 as the global financial crisis hit the market).

We are also able to note that headline inflation grew faster as it averaged 11.52% while real GDP growth grew at a slower rate of 7.2%. The financial crisis majorly had an effect on Nigeria’s financial and trade sectors as it manifested majorly from liquidity and credit crunch as well as a significant reduction in confidence in the banking system.

Hence, the impressive performance of the non-oil sector during the period supported Nigeria’s growth throughout the crisis. 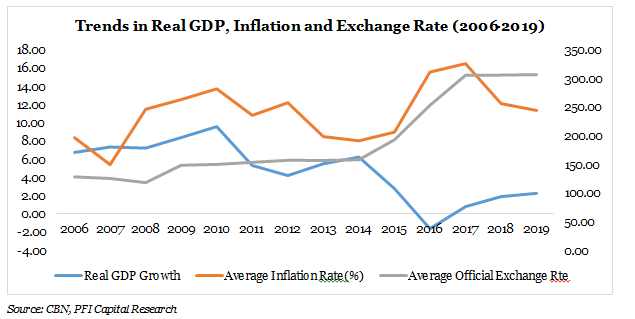 The Nigerian economy entered into economic recession in 2016 (first since 1991) as the real GDP growth for the year printed at -1.58% stemming majorly from the slump in the price of crude oil, while the average inflation rate was 15.62% and average official exchange rated printed at N253.49/$ during the period. 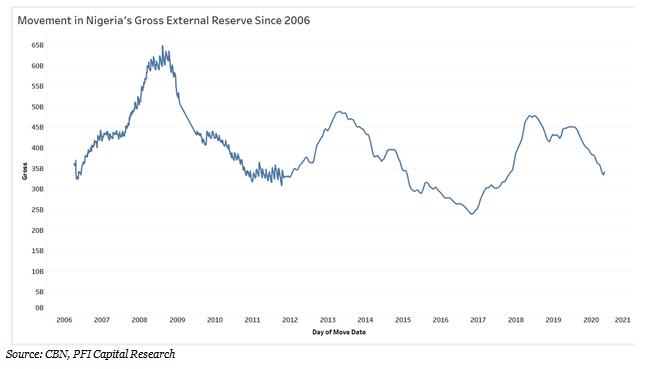 During this period, the CBN restricted foreign exchange on the importation of 41 items including toothpick. By April 2017, the CBN introduced the SMIS window to deepen the foreign exchange market and accommodate all FX obligations for importers and investors. Hence, the beginning of multiple exchange rate windows- CBN official, SMIS and I&E window.

The gross external reserves grew from $38.91 billion on 2nd January 2018, to $43.12 as at December 2018 with the average import cover for the year printing at 13.8 months, on the back of increased oil production and oil prices relative to the 2016 levels.

In 2019, the Nigerian economy grew by 2.27% in real terms, consolidating the fragile growth rates since the country was out of recession in 2017. Average headline inflation rate also grew at a slower rate, printing at 11.39% while the average official exchange rate depreciated marginally by 27bps to N306.92/$ compared to N306.08/$ in 2018. The external reserves which were at $43.08 billion at the beginning of the year, ending the year lower at $38.62 billion.

This showed that the external reserves shed $4.46 billion in 2019. Banking on optimism in external sector activities coupled with the US-China trade deal, as well as high oil prices, the economy was set for continued growth increases in 2020 until the COVID-19 pandemic hit the world which led to oil prices falling.

This was aggravated by the oil price war between Russia and Saudi Arabia which sent oil prices to 18 years low, which had a negative impact on the external reserves of the country which fell to $33.44 billion as at 29th April.

By 13th July, the gross external reserves accreted by $2.69 billion (from the April 29 level) to $36.13 billion on the back on the inflow from the IMF while the CBN keeps having little activities in the forex window.

Our model shows that both inflation rate and exchange rates have a negative relationship with the growth rate and these two variables are significant variables that are influenced by the level of external reserves, which is in turned influenced by the fluctuation in the international oil price.

Consumers’ purchasing power continued to be eroded as headline inflation rose by 71bps to 16.47% y/y (Vetiva:16.73% y/y) in the first month of the...
Read more
- Advertisement -