The ecstatic crowd of residents filed along the route to welcome the Governor, who rode in a BRT bus to formally flag off the 13.68 kilometre-long corridor for public use. 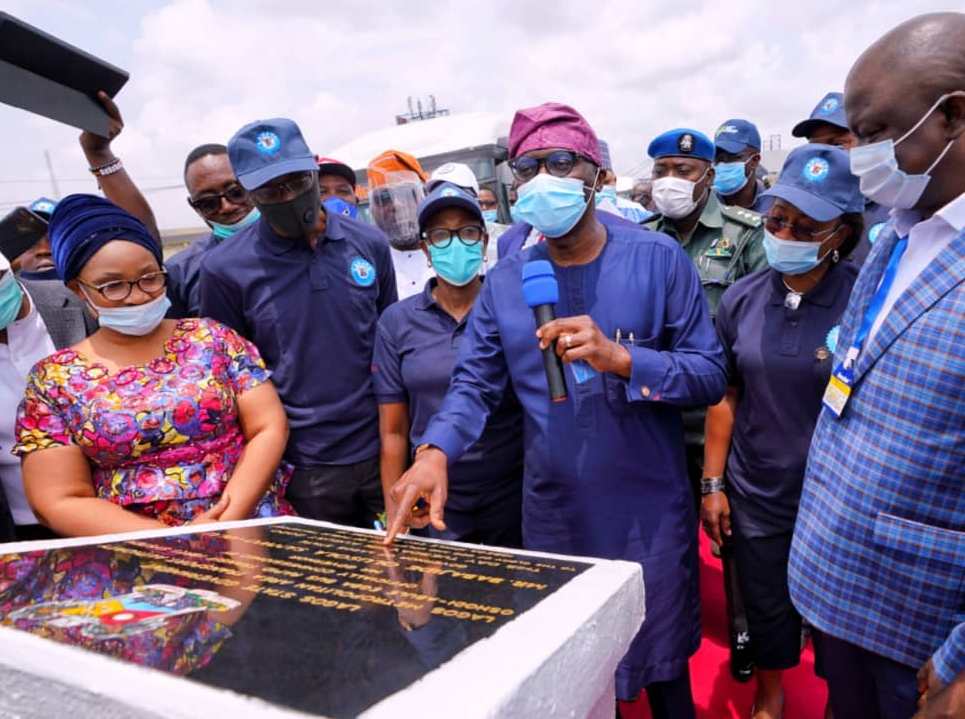 The BRT project was handled and supervised by the Lagos Metropolitan Area Transport Authority (LAMATA) – an agency of the State’s Ministry of Transportation.
The Oshodi-Abule Egba corridor is a major link for residents who commute in and out of Alimosho, Egbeda, Ijaiye, Iyana Ipaja and Oshodi. The route is also a gateway to neighbouring Ogun State and Republic of Benin. 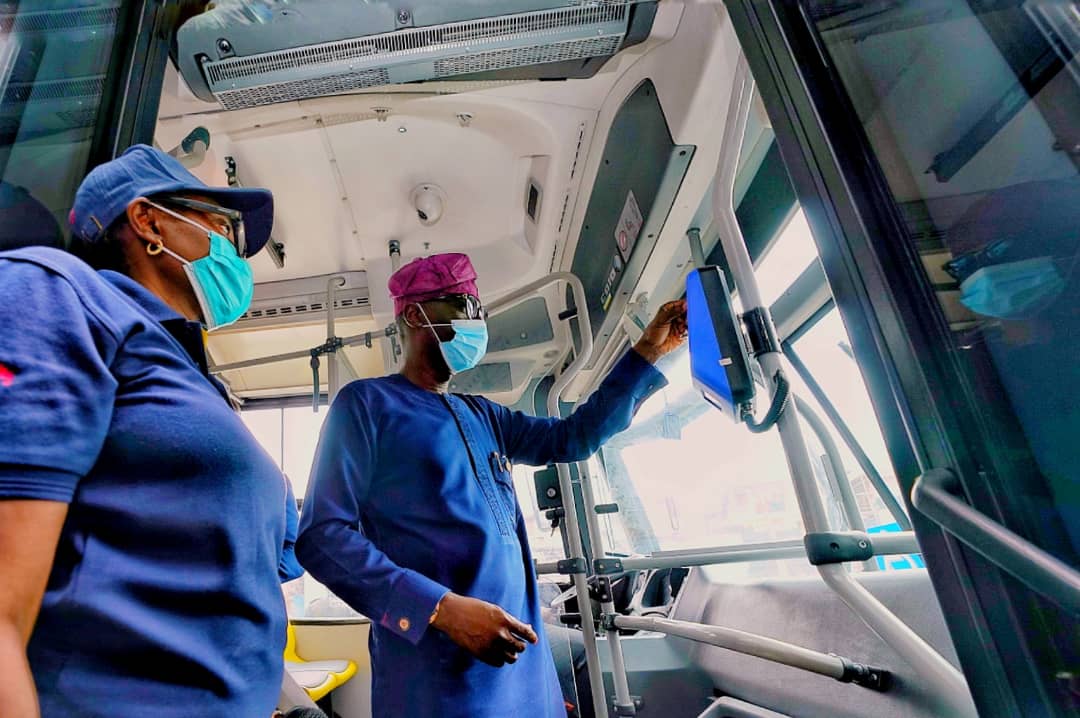 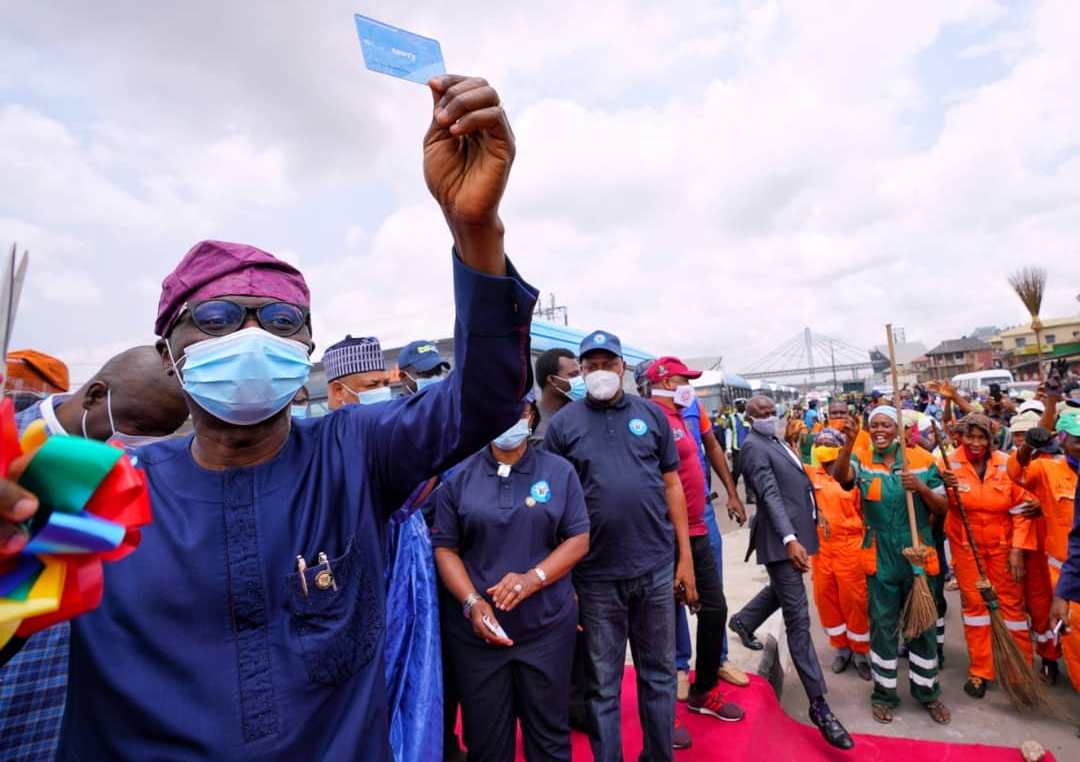 Governor Sanwo-Olu described the event as “a major milestone” in the implementation of his administration’s reform agenda in the public transport system, pointing out that the handover of the BRT infrastructure was another promise fulfilled by his administration. 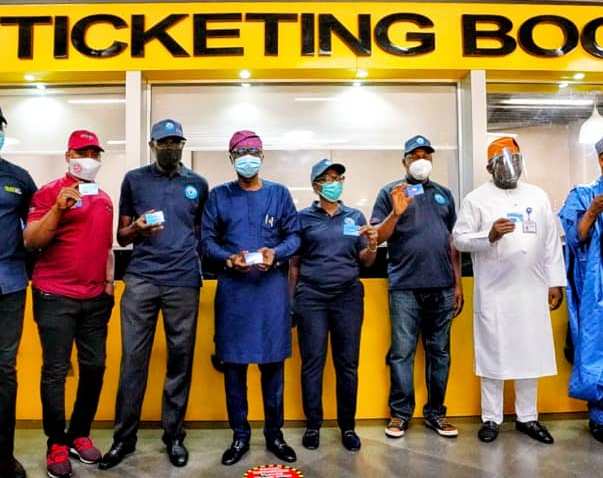 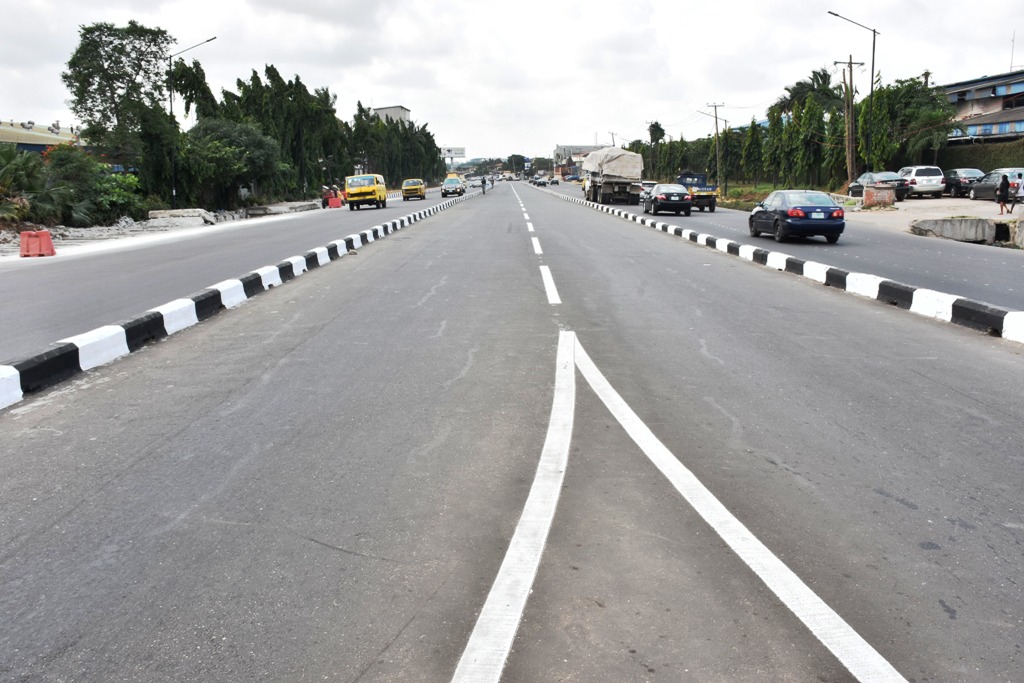 He said the transportation asset would create a new travel experience for residents of Alimosho and Oshodi, stressing that the project was specifically designed to improve journey time for commuters, thereby scaling up productivity and life expectancy in the State.
He said: “A little over a year ago, we pledged to significantly improve traffic flow and transportation system which is the very first of our six-point development agenda encapsulated as Project T.H.E.M.E.S. We made the pledge knowing that the people are the main reason we have been entrusted with the management of our commonwealth. 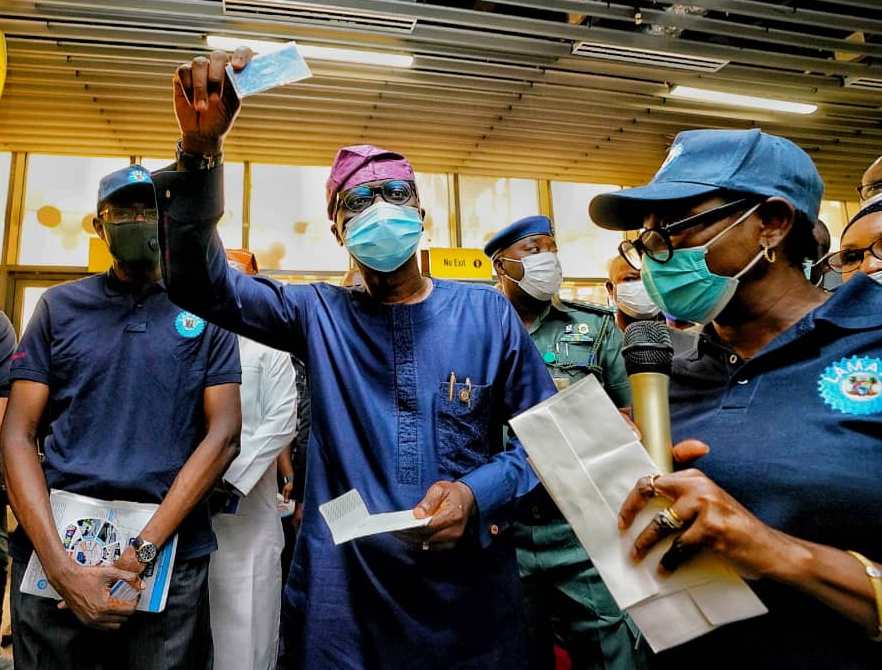 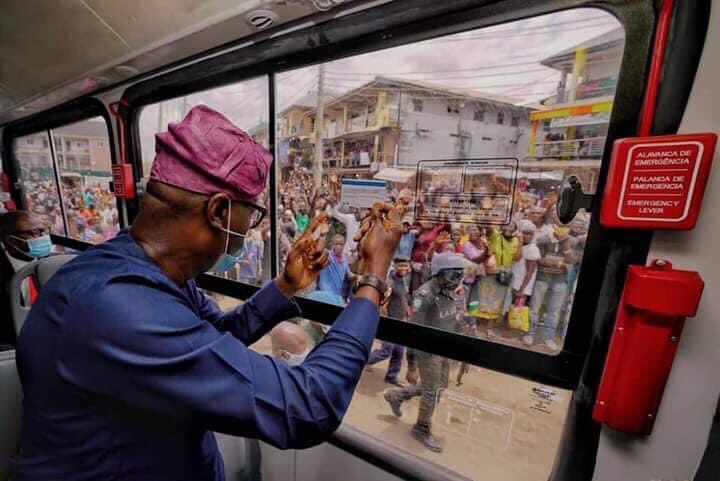 “Today, we are here to formally flag-off a very important public transport infrastructure – the Oshodi–Abule Egba BRT corridor – which officially launches the commencement of transport operation along the BRT corridor. We are unveiling 550 high and medium capacity buses which will be immediately deployed for public use. This event also formally inaugurates our upgraded e-ticketing system in fulfilment of our pledge. 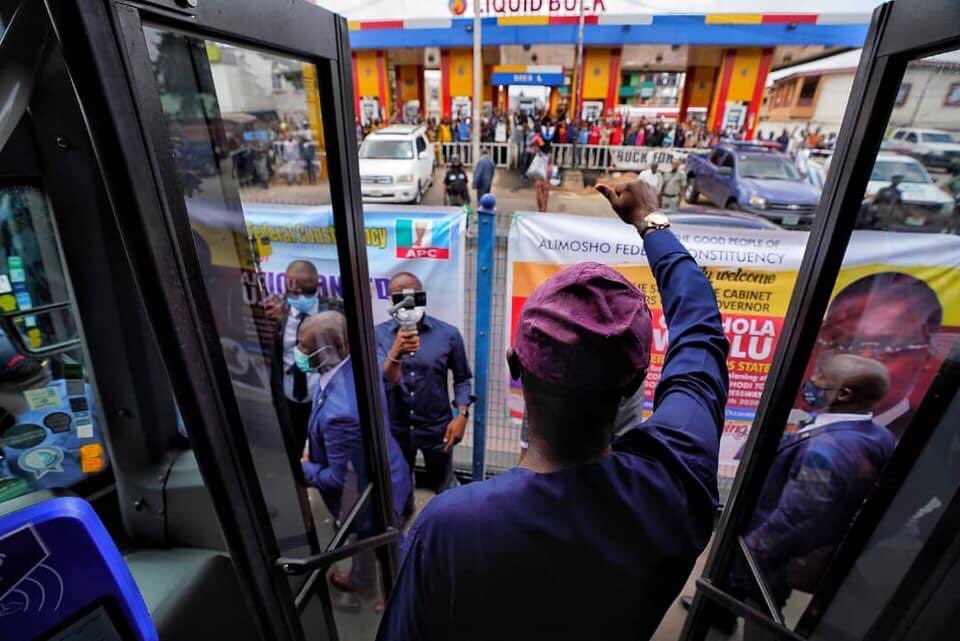 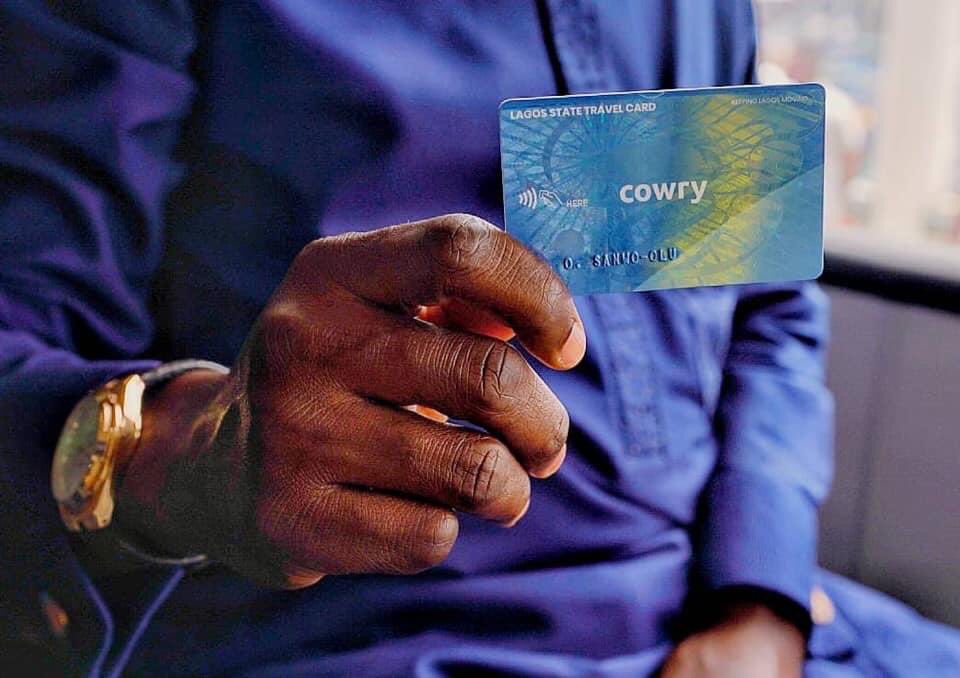 “This project is very significant because of its immense benefits to Lagosians in the different communities it straddles and to visitors to our state. This new BRT corridor will bring great relief to over 60,000 commuters who will use this facility daily. Travel time, which is estimated at an average of two hours during peak periods, will be significantly reduced to an average of 30 minutes. This will improve the health of our people, engender a safer environment, and increase the value of socio-economic activities in the State.”
Sanwo-Olu said his administration’s reform efforts were geared towards birthing a new commuting order in the State through seamless travel and creating smart mobility model that’ll result in a congestion-free State. He reiterated that his Government remained committed to bringing problem-solving interventions across all modes of the transportation sector in Lagos.
To integrate all transport modes on a single smart payment ecosystem, the Governor launched an upgraded e-ticketing platform that would automate fare payment and create smart mobility through a cashless pre-paid Cowry card.
The e-ticketing mechanism has modern functionalities which simplify the process of bus booking and the ticket purchase. It introduces simple solutions that guarantee seamless cash and wireless payment for passengers at designated booths.
The Cowry card will enable passengers to proceed to the loading bay and scan the card for fare deduction.
Sanwo-Olu said: “With the e-ticketing system, we envisage the use of a single card on buses and ferries and later upscale to the railway’s system when passenger operations commence in 2022. The system promotes a cashless ecosystem, aids personal budgeting and planning and commuters can easily top-up.”
The Governor disclosed that the State Government would be distributing the first 100,000 Cowry cards to residents free of charge.
Sanwo-Olu said the State Government was on the verge of complementing Oshodi-Abule Egba BRT corridor with rail project to aid mass mobility.
He hailed LAMATA for supervising the project construction and bringing it to reality, while also thanking President Muhammadu Buhari for supporting the State Government in its drive to deliver an efficient transport system.
He said: “Our administration is very passionate about easing the movement of the citizenry around this beautiful State which is why we would not stop at ensuring that we give you a transport system that works for you.
“I would like to congratulate Lagosians on the successful completion of this project in spite of the challenges thrown up by its implementation. I would also like to commend Lagosians for the pains they had to endure while the construction of this important transport project lasted.”
Commissioner for Transportation, Dr. Frederic Oladehinde, described the project as “great progress” in the public transport system, noting that the BRT route was important to the State’s strategic transportation master plan.
Managing Director of LAMATA, Engr. Abimbola Akinajo said the commencement of BRT operations along the corridor would reduce travel time for commuters by 35 per cent, while also enhancing socio-economic development.
She said: “The frequency of the BRT operation along this route will enhance public transport accessibility by up to 25 per cent, while the provision of the dedicated lane will enhance reliability on the public transportation by 30 per cent. The project has been designed to integrate the proposed Red Line Rail Mass Transit project as part of the Sanwo-Olu administration’s transportation blueprint.”
The new BRT corridor is a median running route with 14 drop-off terminals along the Oshodi-Abule Egba route, which terminates at Katangua Bus Station. Each terminal has well-ventilated foyer where passengers can sit and wait for buses.

The route was designed with 11 pedestrian bridges, traffic safety measures and street lighting.

Even before the COVID-19 pandemic, a majority of citizens say they went without needed medical care and clean water...
Read more
Business & Economy

Polaris Bank Limited has announced the appointment of Mr. Segun Opeke as an Executive Director of the Bank by the Board of Directors and...
Read more
Entertainment & Lifestyle

All is set for the 2020 edition of the Konga Freedom Sales, an annual promotion by the foremost composite e-Commerce giant targeted at celebrating...
Read more
Transportation

Enabled by the partnership with Audi: FC Bayern Munich is the first international football club to drive using electric power. The stars of the...
Read more
- Advertisement -

Relief is on the way for the estimated over 7 million passengers plying Lagos roads on a daily basis, as Heritage Investment Services Limited...
Read more
- Advertisement -