Seven in ten adults worldwide (70%) say abortion should be permitted, according to a new Ipsos Global Advisor survey of nearly 17,500 men and women from 25 countries.

August 17, 2020 — Seven in ten adults worldwide (70%) say abortion should be permitted, according to a new Ipsos Global Advisor survey of nearly 17,500 men and women from 25 countries. 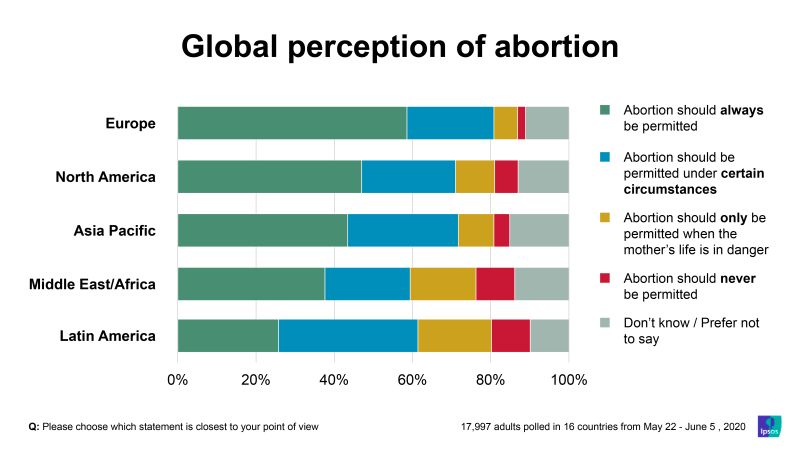 Women’s right to have an abortion is most widely accepted in Europe, with 80% saying it should be permitted. Sweden tops the ranking with an 88% acceptance rate, followed by Belgium (87%), France (84%), and Great Britain, the Netherlands, and Spain (83% in all three countries). Outside of Europe, abortion is most widely accepted in South Korea (79%), Australia (78%) and Canada (77%).

Latin America shows lower acceptance rates with 62% of adults surveyed across the region saying abortion should be permitted. Only 26% of respondents across five Latin American countries agree a woman may have an abortion whenever she wants, while 36% accept that it may happen under certain circumstances, such as rape.

Overall acceptance of abortion in the region ranges from just 48% in Peru and 53% in Brazil to 72% in Argentina – the only Latin American country surveyed where acceptance is above the global average.

Among all 25 countries in the survey, Malaysia is the one where abortion is least accepted. Only 24% of Malaysians polled say it should be permitted either whenever a woman wants it or in certain circumstances such as rape. Malaysia shows the largest proportion of survey respondents saying abortion “should not be permitted, except when the life of the mother is in danger” (48% vs. a global average of 12%).

Women in general and adults with a higher education show higher acceptance, particularly in saying abortion is a woman’s decision.

Ipsos has been tracking global views on abortion since 2014. Results have remained quite steady through the years in most countries. Abortion acceptance has increased significantly in South Korea, Russia and Mexico.

Later this year, Argentina’s Congress is expected to vote on a new abortion bill and, in accordance with a court ruling, abortion should be legalized in South Korea. March 8th saw women actively fighting for their rights in Chile, Argentina and Mexico, as well as other Latin American countries, to mark International Women’s Day.

These are the results of a survey conducted by Ipsos on the Global Advisor platform. Ipsos interviewed a total of 17,997 adults aged 18-74 in United States, Canada, Malaysia, South Africa, and Turkey, and 16-74 in 20 other countries on its Global Advisor online survey platform, between May 22 and June 5, 2020.

The samples in Argentina, Australia, Belgium, Canada, France, Germany, Great Britain, Hungary, Italy, Japan, the Netherlands, Poland, South Korea, Spain, Sweden, and the U.S. can be taken as representative of these countries’ general adult population under the age of 75.

The samples in Brazil, Chile, India, Malaysia, Mexico, Peru, Russia, South Africa and Turkey are more urban, more educated, and/or more affluent than the general population. The survey results for these countries should be viewed as reflecting the views of the more “connected” segment of these population.

Global consumer optimism rallies to its highest in 9 months – Ipsos